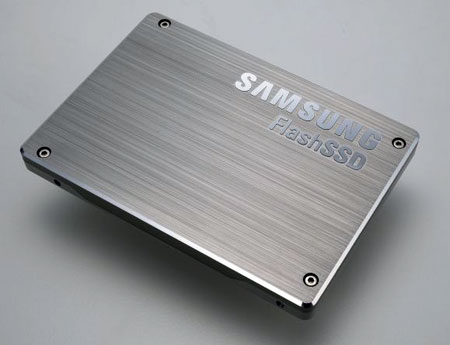 One of the things that consumers are craving for these days is the solid-state drives or SSD, as they are popularly called. One big advantage they offer is that there are no moving parts. To meet the demand, many companies are planning to come up with solid-state drives. One such technology company is Korean giant Samsung Electronics.

Now Samsung has sent word that they have begun the mass production of 64GB SSDs with its new SATA II interface. Many technophiles are looking forward to this device as the SATA II drive will be offering great performance rates. Samsung claims that the new solid state drives will be up to sixty percent faster than the SATA I drives. It will be able to write at 80 megabytes per second while the reading of the data by the SSD will be done at 100 megabytes per second.

One big complaint about hard disk drives is that they gobble a lot of power. But Samsung seems to have worked hard on this thing. They tout that this SSD will be consuming less power, some 75 percent lesser than archetypal HDDs. If you delve into the numbers, this SSD consumes some 1.45 watts compared to 2.1 watts that a typical HDD consumes. And yes, one more thing that seems favorable about the SSD is that it weighs just 73 grams!

Besides these advantages, this SATA II SSD also produces very little heat, is noise free and is much less susceptible to shocks. Samsung says that compared to the HDD’s shock resistance rating of 300 Gs in 2 milliseconds, this SDD can resist up to 1500 Gs of shock in a half millisecond.

Samsung does seem pretty excited about the SATA II interface. Jim Elliott who is the director of the flash marketing department Samsung Semiconductor states, “While there will always be a market for HDDs, we see increasing demand for our new SSDs, especially now that they are available with the SATA II interface. SSD technology is especially practical for the business and high-end consumer notebook markets because of its outstanding performance, as well as the added value gained from virtually no downtime and faster operating speeds.”

The 64GB SATA II SSD by Samsung had begun shipping earlier this month. They have stated that this solid state drive will be available in select Dell and Alienware notebooks in the next few weeks as an option. The SSD is a wonderful thing but one thing that companies will have to make sure is that they will have to come up with drives that have very high capacities and are cheaper. 64GB does seem a little less as users these days store a lot of multimedia data, which require lots and lots of space.