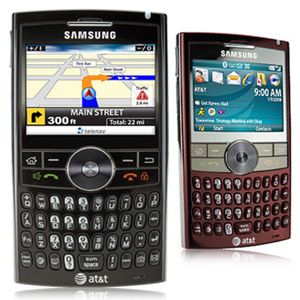 Samsung together with carrier AT&T have announced the sleek BlackJack II smart device in the US. This phone will be powered by AT&T’s 3G-enabled BroadbandConnect network in the US.

The compact Samsung BlackJack II smartphone features a full QWERTY keyboard, a large 2.4-inch QVGA color display and a front jog wheel. Moreover, as this device runs on Windows Mobile 6, users will be thoroughly familiar with the operating system.

Also, when using the Samsung BlackJack II smartphone, users will be able to access multiple email accounts through Microsoft Direct Push technology with Outlook Mobile and AT&T Xpress Mail that includes most of the major POP3/IMAP providers.

Other salient features of the Samsung BlackJack II Smart device include:

Moreover, the presence of Windows Mobile 6 allows users to stay in touch with important business and personal matters. It also makes it even easier to access Microsoft Office applications such as Word, Excel and PowerPoint. It also supports Internet Explorer.

Dale Sohn, President of Samsung, said “We built upon the success of last year’s award-winning version of the BlackJack, our No. 1-selling smart device. This highly popular device allowed Samsung to develop BlackJack II with several design enhancements, making it the quintessential device for both work and play.”

The Samsung BlackJack II on the AT&T network is expected to go on sale in US stores at the end of this year for a price of $149.99 (approx. Rs.6,000) along with a two-year contract and mail-in rebate.