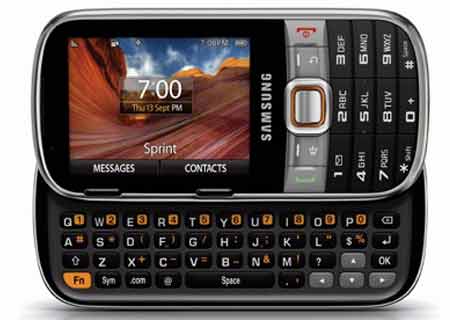 The stylish, yet affordable Samsung Array Sprint handset which made its debut on Boost Mobile back in August has now gone up for purchase on the former carrier as well. To top it off, it’s available for a price of $19.99, that’s approximately $30 lesser than the $59.99 tag put up by the latter network provider.

Classified under the feature phone category, the handset takes on a stylish appearance featuring a slide-out design for revealing the full QWERTY keyboard which aims to make texting and capturing images an intuitive task. For those who can’t get enough of messaging, the company has incorporated a chat-like interface for the messages application, which displays full conversations for each individual contact. There are a bunch of productivity tools thrown in as well, including a calculator, a calendar and a task list as well as voice dialing.

Users will have access to the carrier’s 3G network for browsing the web and downloading content such as games, ringtones and much more. They will also be able to set up a personal email account on Sprint Mobile Email. For entertainment, the mobile phone is bundled with a 2MP rear-facing camera with video recording, a music player, a 3.5mm audio jack and Stereo Bluetooth support. 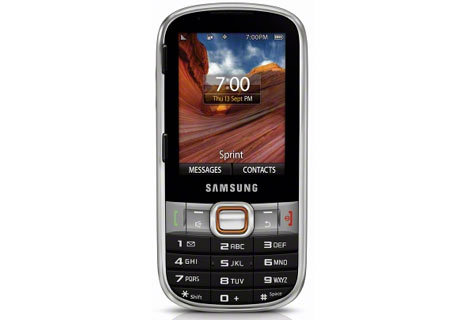 On the design front, the Samsung Array Sprint measures 2.12 x 4.41 x 0.59 inches and tips the scales at 117.4 grams. On the front, a 2.4-inch QVGA display dominates the upper half, while the lower part features a numerical keypad with directional keys. The insides comprise of a 1000mAh Li-ion battery that’s capable of delivering up to 4 hours of talktime, a 480MHz processor and 128MB RAM. The integrated memory stands at 40MB for hoarding downloaded content, while the ROM amounts to 256MB. There’s also a microSD card slot for expansion purposes supporting up to 32GB.

As stated above, the Samsung Array Sprint price sums up to $19.99 after a $50 mail-in rebate. The handset is available for purchase through the carrier’s website on a 2-year agreement.