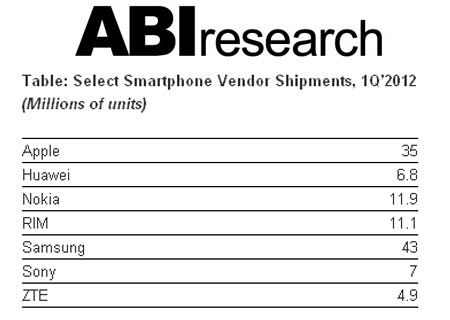 Among the various handset OEMs present on the scenario, Samsung and Apple have clocked in 55% global smartphone shipments in Q1 2012. Furthermore, ABI Research also reveals that both the companies in question have gained over 90% of the overall market profits. The findings even state that Sony and Samsung underwent a significant shipment increase over Q4 last year.

Apart from the aforementioned companies, Nokia experienced a 40% decline as far as its shipments were concerned. And according to ABI Research, this number may be surpassed by RIM although at present, its shipments rates are at a 20% decline. Additionally, the Western Europe and North America smartphone market sail through 50% penetration while China boasts of a strong shipment growth that reads at more than 80%.

“As Nokia’s market share in China plummets, the competition to fill this power vacuum has the potential to make or break smartphone OEMs currently struggling with profitability and differentiation,” said Jeff Orr, practice director, devices, applications and content.

According to senior analyst, device applications and content Michael Morgan, Nokia will need to expand its Windows Phone business by 5000% this year if it wishes to compensate for the low Symbian shipments. Coming back to the state of affairs in China, smartphone bigwigs will have to face competition from local vendors such as ZTE and Huawei. The duo’s smartphones and homologated content ecosystems are fashioned to sell at lower price points.

Besides Apple and Samsung’s 35 and 43 shipment units, respectively, other companies like RIM, Nokia and Sony assembled numbers that read as 11.1, 11.9 and 7, correspondingly in Q1 2012. As per ABI Research, the shipment units for China locals namely, ZTE and Huawei are noted to be 4.9 and 6.8, respectively.