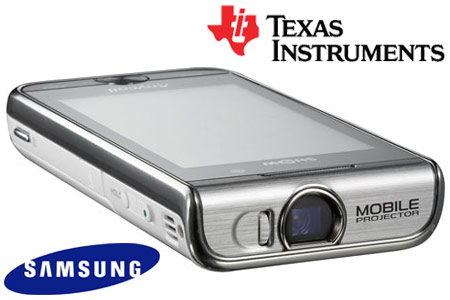 Samsung in partnership with Texas Instruments recently made official the company’s first projector mobile phone called the Show W7900. The European version of the phone is called i7410. Both phones will incorporate the Texas Instruments DLP Pico technology. Embedded with projection capabilities, the new phones will allow users to enjoy big-picture viewing through their mobile phones.

Adorning a lightweight and compact form factor, both the Samsung projector phones have the ability project content with flexible image sizes which are much larger than standard phone screens. The projectors can project images more than 50-inches in size depending on ambient light conditions.

“Working together, Samsung and Texas Instruments, DLP(R) products have made headway in a currently untapped market,” explains Wonsik Lee, Vice President of R&D Planning Team at Samsung Electronics. “This is an exciting time for the mobile phone industry as we transform the limitations of the mobile phone viewing experience to compelling image sizes that really adds significant value to both business and consumer users.”

“With the production of the DLP Pico(TM) chipset first announced a year ago, Samsung and DLP are proud to launch the first implementation of the DLP Pico(TM) Chipset technology in mobile phones,” remarked Frank J. Moizio, Manager, DLP Emerging Markets business. “These Samsung phones instantly turn any situation into a media viewing opportunity. While tiny by nature and easily able to fit into a mobile device, the DLP Pico(TM) chipset produces stellar image quality and gives the freedom to project content onto practically any surface.”

The new phones should offer users a complete mobile office and entertainment solution. With a 5.0-megapixel camera, the phones will offer enhanced support for multiple applications. Users can view PowerPoint Slides, email attachments, pictures, videos, and more using the projection feature of the phones as a Flashlight

Sporting a high-resolution color OLED touchscreen, the phones also include intuitive flick navigation to view presentations and photo slideshows. There are also built-in audio speakers on board.

While the Samsung Show W7900 projector phone will be available in Korea around February 2009, the i7410 should soon reach European stores. There is no word on the price of the Samsung projector mobile phones.