As it turns out, all that talk about Samsung having decided to launch its Galaxy Note 5 phablet earlier than usual in order gain an advantage over the upcoming and rumored iPhone 6S Plus was true. The company was expected to announce an event on August 13, and it has done just that.

New York is the place where it will be showcasing two new entrants into its strong line of top-end smartphones. While one among them will of course be the Samsung Galaxy Note 5 with its trademark S Pen offerings and a large display, the other one is called the Galaxy S6 Edge Plus and is basically an enlarged variant of its parent device.

As usual, the event has been named Galaxy Unpacked and is being teased by Samsung through its social channels. It will be live streamed all over the world, in case you’re not in the mood of buying a two-way ticket to New York. 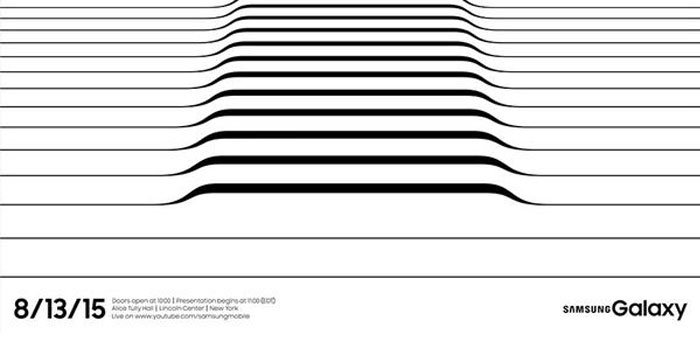 The announcement of this gathering has been done by Samsung via Twitter where a teaser image has also been published by it. This picture is definitely trying to suggest a curved display, which means it’s teasing the upcoming Galaxy S6 Edge Plus handset.

Leaked details about this device have revealed that it will be shipping with a 5.7-inch Quad HD display and a 16MP main camera. Moreover, a 5MP selfie snapper will also form part of its offerings apparently.

August 13 isn’t too far away from now, so we won’t have to wait for long in order to find out more about the Samsung Galaxy S6 Edge and the Galaxy Note 5 handsets.