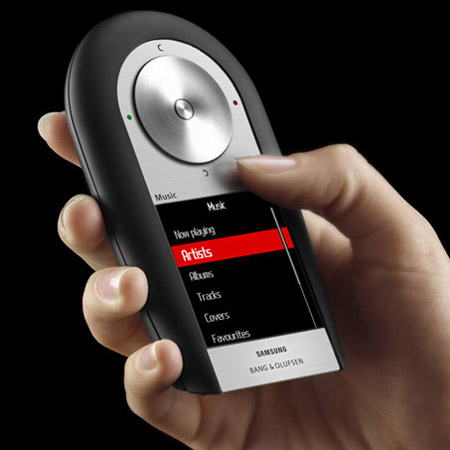 Samsung has joined hands with Danish company Bang & Olufsen to introduce Serenata, which claims to be a true iPhone competitor.

Bang & Olufsen is a designer and manufacturer of stylish high-end home electronic products.

The novel looking Serenata MP3 phone includes 4GB of music storage and is designed for one-handed use, the click-wheel is used for phone dialing, writing texts and emails and accessing the music lists. All primary functions on the phone are controlled by the click-wheel.

A 2.26-inch LCD (liquid crystal display) touchscreen is placed below the click-wheel. The LCD screen displays menus and album artwork. The Serenata is compatible with GSM Networks (900,1800, and 1900 MHz bands) and HSDPA service.

You just need to press one button placed in the center of the click-wheel to instantly shift from phone mode to music mode. The other music features included in the Serenata phone are:

As mentioned before, the Samsung and Bang & Olufsen Serenata phone is sure to pose some great challenge to Apple’s iPhone. What’s more, both the phones will be shipped in Europe by October-end, which is around the same time that the iPhone could release there.

Bundled with the Serenata is a dock to charge the phone, giving line-out audio for speakers and a USB connection that syncs files and music with both Macs and Windows. Reportedly, Bang & Olufsen could also include an extra software to transfer music from iTunes.

No details on the pricing of the Samsung and Bang & Olufsen’s Serenata phone have been revealed yet.