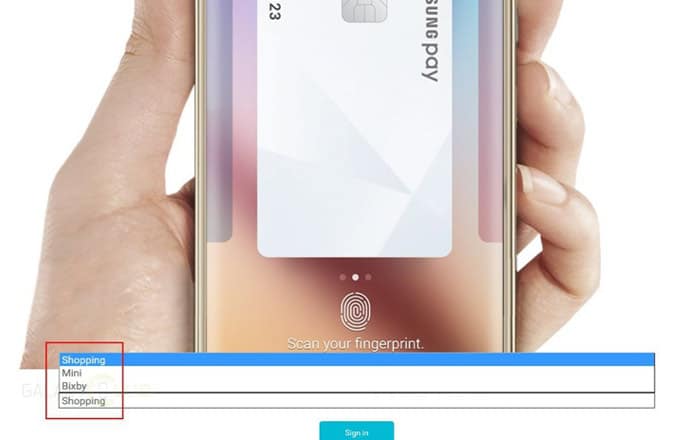 Samsung’s Bixby virtual assistant has mostly been kept in the shadows so far, with very little official information to go on. The AI platform has now appeared on the brand’s official website.

Bixby appears as part of a drop-down menu on the Samsung Pay Beta page, alongside options like Shopping and mini. It seems the brand is planning to infuse the digital assistant with its own Android apps and the new Samsung Pay Mini.

As per Galaxy Club, Samsung Pay Mini is a stripped-down version of Samsung Pay. Users will supposedly only be able to utilize the former for online transactions. On the other hand, the latter allows for payments to be made via offline outlets as well.

Word on the street is that Samsung is working on male and female avatars of its assistant called Bixby and Kestra. Both will probably be making their debut on the Galaxy S8 and later get integrated with the Galaxy Note 8.

Talk about Bixby first erupted a few months ago when Samsung acquired Viv Labs. The startup’s AI specializes in understanding the context behind commands. Samsung’s take on the digital assistant might take advantage of that ability and further add features like being able to search for specific media within the Gallery app.

Samsung officials had previously confirmed that the next Galaxy flagship would be blessed with AI intelligence. The company is probably looking to take on Apple’s Siri and Microsoft’s Cortana with the assistant. It may have to face competition from Nokia too. The firm is apparently working on an AI platform named Viki.