Samsung 5G mmWave mobile technology to be commercialized by 2020 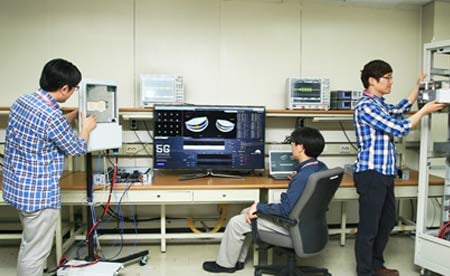 Even as we speak, the guys over at Samsung are working on developing the 5G mmWave mobile technology that is all set to go commercial by 2020. The company claims to have hit the 1Gbps milestone when using the fifth generation network which seems way better than what the LTE can pull off.

Meant for cellular communications, it is said to be the first adaptive array transceiver technology that operates in the millimeter-wave Ka bands. The South Korean conglomerate has revealed that its data transmission speed is several hundred times faster than the current generation service. But the OEM has no plans of commercializing it any time before 2020, which means interested users will have to wait till then to make the most of this speed which will apparently allow them to download an entire movie in a second.

The company doesn’t deny the fact that millimeter-wave bands have been considered in the past, but their limitation in transmitting data over long distances was one of the major roadblocks. Its unfavorable propagation characteristics were cited as one of the main reasons for the same. But this doesn’t seem to be the case with the new adaptive array transceiver technology.

It has been revealed that it has successfully transmitted data in the said band at a frequency of 28GHz and has managed to clock in a speed of 1.056Gbps over a distance of 2 kilometers. With a little assistance of 64 antenna elements, this technology can circumvent the aforementioned obstacle of radio propagation loss. This frequency is definitely higher than the conventional ones which are limited to just a few GHz.

The fifth generation network speed will dramatically increase the rate at which data is transmitted. And the technology in question is definitely not the only contender in this category, China and European Commission are also working on developing the new iteration and bringing it to the market by 2020.

The Samsung 5G mmWave mobile technology will allow users to transmit massive data files, 3D movies and even experience real-time UHD streaming. It should prove to be a boon for remote medical services too. And as we’ve already mentioned, this technology will not be released for another 7 years.