As the Samsung 3GB LPDDR3 mobile DRAM has already entered mass production, the South Korean manufacturer may soon introduce smartphones and tablets loaded with the new memory module. Samsung’s highest density solution for handheld gadgets is likely to replace the 2GB ones which are currently seen in most flagship gadgets.

According to the Executive Vice President of memory sales and marketing, Young-Hyun Jun, high-end smartphones will start adopting the Samsung 3GB LPDDR3 mobile DRAM in this half of 2013 itself and it will gradually be integrated in even more devices by next year. The memory module in question features 6 4Gb LPDDR3 20nm chips which are placed symmetrically in two sets. Also, it has two data transfer channels, each of which connects to 1.5GB part of the RAM and to an application processor.

Its symmetrical structure is said to play an important role in considerably improving the level of performance. The OEM has also revealed that it plans to introduce another version of the Samsung 3G LPDDR3 mobile DRAM that will boast of 4 6Gb chips stacked in sets of two on either side on the component. This variant may get incorporated into phones by the end of this year.

Moreover, the sleek memory solution claims to take up little space within a gadget, thus making more house for other components and paving the way for even thinner devices. Capable of delivering data transfer speeds of up to 2133Mbps per pin, Samsung 3GB LPDDR3 mobile DRAM should ensure better full HD video playback and even extend full support to the next-generation telecommunication speed, LTE-A. 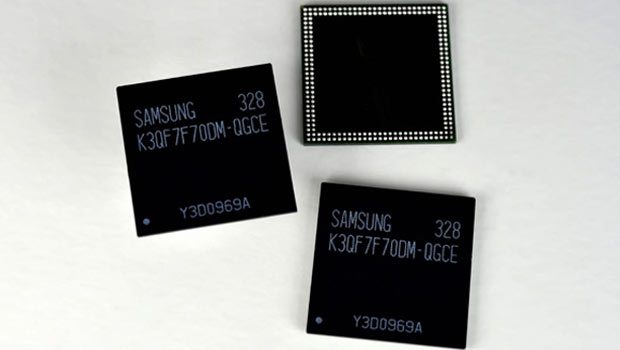 Now that the 3GB LPDDR3 mobile DRAM is being mass produced, we will not be surprised to see it perched inside the upcoming Galaxy Note 3.