2K tablets and smartphones are slowly becoming the norm in the mobile market, but Samsung appears to be a step ahead. The company apparently has a 4K slate in the works and it was recently spotted at a Qualcomm event in Paris.

TechRadar has managed to get its hands on quite a bit of information about the mystery tablet. It turns out that the device isn’t a production model and is instead still a prototype. Having a 12-inch display, visuals are provided at Ultra HD resolution and a Qualcomm Snapdragon 801 chip is said to be behind the wheel. What isn’t clear here is the type of panel being used. As you’re probably aware, Samsung will launch its first tablets with 2K AMOLED screen, while previous ones have carried TFT LCDs. 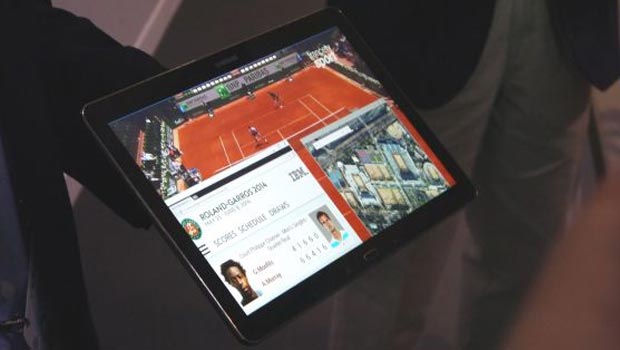 Also, the 12-inch tablet shown above looks almost identical to the Galaxy Tab Pro and Note Pro slates. Qualcomm was using the device to demonstrate broadcasting streams over LTE at the event and the slate is designed mainly for testing purposes. So will it ever reach the market? Qualcomm’s Senior VP of Product Management, Raj Talluri, told TechRadar that 4K tablets are most likely to hit the market before 2014 comes to end. However, there’s no word on whether this 12-inch Samsung slate or any other from the company will be amongst the first wave.

As mentioned above, Samsung does plans to launch new tablets with 2K AMOLED displays next week. Head over to this post for information on the specs and design of the upcoming slates.