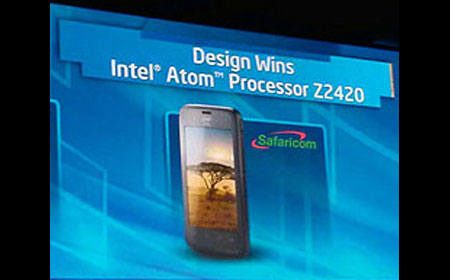 The Intel Yolo has been announced as a budget device for Africa from mobile network operator Safaricom. The phone is set to make its way into Kenya as the first smartphone to enter the African continent with an Atom processor, although no mention of a release date has been given.

The Safaricom Yolo is targeted at first-time buyers in Kenya and comes with a 3.5-inch touch screen. It has been reckoned that there is an escalating number of people in the country who count cost above most else. And so the phone has been built making sure user experience and performance is not sacrificed owing to the tag.

Needless to say, the device is based on the chip maker’s latest smartphone platform which was launched at this year’s CES. This platform is targeted at emerging markets and seeks to deliver fast web browsing and interesting multimedia capabilities. The Atom Z2420 processor even offers the company’s Hyper-Threading Technology and we’ve already seen it in the Lava Xolo X500 for India. It can achieve clock speeds of up to 1.2GHz.

Another fairly premium feature is brought in with the inclusion of a camera which is capable of capturing pictures in 5MP quality. According to the company, the device even offers support for recording videos in 1080p HD resolution. The technology used will allow for a burst mode in which capture of seven images in a second is possible.

The handset will run on Android, although which version exactly hasn’t been mentioned. But considering that it is a budget device, we can speculate that this could either be Gingerbread or at a stretch, Ice Cream Sandwich. At this point, not much else is known about the phone and everything from battery capacity to internal memory storage to RAM to complete connectivity options still remains in the dark.

The Intel Yolo will be introduced in Kenya for KES 10,999 via Safaricom. It will come bundled with 500MB of free data, and in terms of connectivity, HSPA+ modem support has been included.

Take a look at the known specifications of the device for Kenya listed below.