Microsoft’s latest Surface Pro 3 is a mighty challenger in the high-end tablet segment and LG has just revealed its weapon of choice, the Tab Book Duo. The device is the third addition in the series and it also sports a convertible form factor, but with a different approach.

The previous releases from the company offered Ultrabook-class features and a slide-out form factor where the keyboard is tucked away under the display. In the new LG Tab Book Duo, the company has dropped this design and gone for a conventional tablet look. 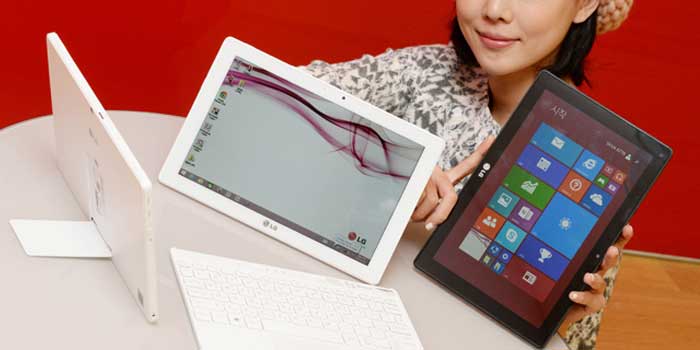 And like the Surface Pro 3, it has an integrated kickstand on the rear and comes with a Bluetooth keyboard which can be pared with multiple devices (up to 3) apart from the slate in question. There’s also a feature for quickly switching between connected smartphones or tablets to save you the hassle of going through the entire processor again.

PhoneArena is reporting that an Intel quad core processor does the heavy lifting here, but the exact make and model hasn’t been disclosed. What’s disappointing is that the company will most likely go with a Haswell CPU since the new Core M Broadwell lineup doesn’t have quad core offerings as yet.

LG has also disclosed that the tablet will be of 10.1 inches with a multi-touch IPS panel for visuals (resolution still unknown). The device will weigh 530 grams or 792 grams with the keyboard docked and Windows 8.1 will come preloaded along with USB 3.0 and microHDMI output. Additionally, we know that the slate will be capable of up to 11 hours of battery life.

The LG Tab Book Duo will go on sale in South Korea in options of black and white for ₩740,000 which amounts to around US$670 after conversion.