One of the latest Samsung devices have been leaked, the Galaxy Mega 6.3 in Germany is already up for pre-order according to a new report, and has even been slapped with a price tag. Just recently we received word of the handset in question when its specs emerged, along with those of a 5.8-inch version. A few things struck us as odd, such as the intermediate amount of RAM and the PLS display. But now these have seemingly been confirmed.

According to SamMobile, a listing has been put up on German retailer, Notebooksbilliger’s website with the same model number that appeared in the earlier report (I9200). It should be mentioned, though, that the gadget looks a lot like the Note 2 and is even depicted with a stylus, something the ‘leak’ left out.

Anyway, the phone should come with a 6.3-inch PLS display and a screen resolution of 1920 x 1080 pixels. The latter was previously unknown and puts the handset in the same league as the GS4. The listing appears to back up (or at least add support to) old speculation in terms of photographic capabilities. It should have an 8MP primary camera with a 2MP webcam on the front. 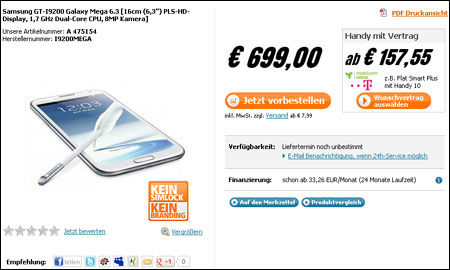 RAM is set at 1.5GB, something that still seems odd but acceptable, and a little more light has been ‘shed’ on the processor. In this respect, it is expected that there will be a 1.7GHz dual core ARM Cortex A15 chip to keep operations speedy and apps responsive. Internal memory hasn’t been given a mention, but microSD card support will be available, according to the retailer.

The handset is also expected to have a 3,200mAh battery, a spec shared with the earlier report, while wireless options will include Bluetooth, Wi-Fi and A-GPS. And the device should run on Android 4.2, measuring 167.6 x 88 x 7.9 millimeters in dimensions. Nothing has been said about the company’s Nature UX though, and it should stand people in good stead to order only once the South Korean manufacturer has announced something officially.