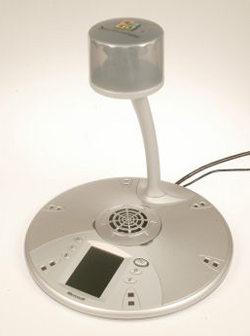 On June 27, Microsoft unveiled a prototype of its video conferencing camera called RoundTable, which is a 360 degree camera designed especially to aid video conferences.

Microsoft Business Division President Jeff Raikes launched this new camera as part of the VoIP stategy . Apparently the RoundTable video conferencing camera has emerged from a back-burner project called RingCam directly from the laboratories of Microsoft.

With Microsoft’s software driving an online video conferencing session and the RoundTable camera placed on top of a conference table, remote participants will now be able to see the faces of the active speakers at a meeting. Participants who become weary of the angle changes that take place during heated arguments might just prefer the panaroma view, which comes as an optional feature on Microsoft’s RoundTable camera.

Documents and PowerPoint slides can also be featured into the picture, synchronized with cues that may be provided by the speaker/speakers.
To demonstrate the potential usefulness of the RoundTable camera in future videoconferences, Raikes participated in a mock session with various product managers and sitcom stars, engaged in a scripted argument over what to order for lunch.

“The virtual meeting experience can be, should be, and maybe in some ways be even better than actually being in the room,” Raikes told attendees yesterday. “One of the things that we’ve learned from our research is that it’s possible to view the meeting in about half the time just by using good compression of the normal pauses in human speech – which, of course, leads to the great paradox: If you can review the meeting in half the time after the meeting, who wants to go to the meeting in the first place?”