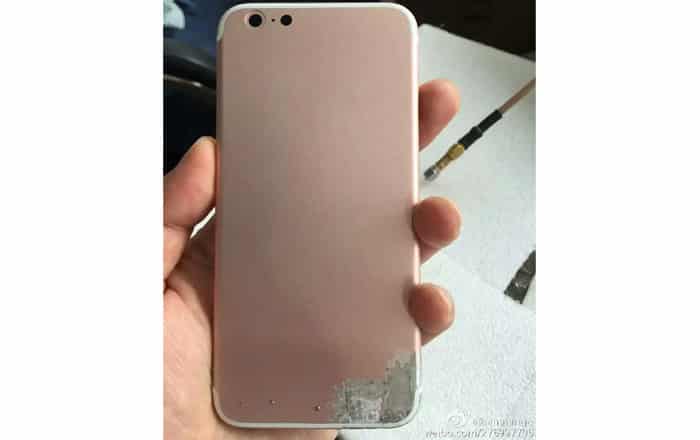 Rumors about the iPhone 7 have gone into overdrive recently, from news concerning its base storage model to cover leaks. The latest one comes straight out of Chinese social networking website Weibo and shows off the back panel of the handset in all its rose gold glory.

Weibo leaks are notoriously unreliable and there’s unfortunately no way to prove or disprove whether the image is the real deal. Still, it does fall in line with earlier speculation which had suggested that the iPhone 7 would feature an antenna band-less rear surface. Going by the new photo, Apple plans to push the lines to the top and bottom of the device for a cleaner look.

The shell also features cutouts for the camera, microphone and LED flash. If accurate, it could debunk a recent leak which had hinted at a vertical layout for the three. There’s no Apple logo in sight though, bringing up questions about the component’s legitimacy. The part also appears to be severely damaged in its bottom right corner which suggests that it could be a factory defective piece.

The single cutout for the shooter also confirms previous hearsay which had claimed that the 4.7-inch iPhone 7 would stick to a single-lens system. The dual-snapper module will be reserved for the higher-end iPhone 7 Plus model. The latter is also likely getting equipped with a Smart Connector and 3GB of RAM to further differentiate itself.

Recent talk around the internet has given fuel to rumors that Apple may finally be ready to bid goodbye to the entry-level 16GB storage model in the iPhone 7. It apparently plans to offer the series with a 32GB base version instead. The development should prove to be welcome news for users struggling to fit in all their data.