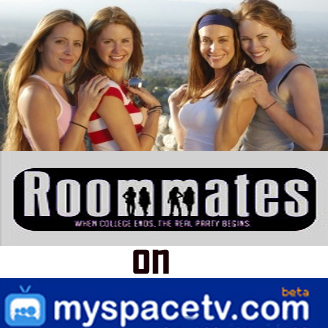 Popular social networking site MySpace has announced the launch of an original scripted Web series called ‘Roommates’ together with Iron Sink Media and sponsored by the 2008 Ford Focus. This series happens to be MySpace’s first co-development project and the first original Web series created specially for MySpaceTV.

As of now, the first 45 episodes of Roommates are available on MySpaceTV. In fact each day of the week offers a new Roomamtes episode at 1:00 pm PT/ 4:00 pm ET.

According to Jeff Berman, GM of MySpaceTV, “Whether it’s network television shows, original Web productions, or user-generated genius, we’re committed to offering our users the most exciting content anywhere on the net. We’re thrilled to see that MySpaceTV is quickly becoming Hollywood’s digital playground.”

In case you are wondering what’s the ‘Roommates’ series all about, then read on. ‘Roommates’ follows a group of eight former college roommates after graduation. The four main characters Peyton, Violet, Heather and Sigourney, move the Los Angeles where they are invited to take part in a “reality show” by living in a house wires with cameras and computers to document their every move.

All in all, ‘Roommates is a combination of voyeuristic segments, confessionals and college flashback footage, and allows old friends and romances of the main characters to address viewers interactively via video blogs.

By interacting with the Roommates characters through their individual profiles and participating in online discussions, the MySpace community will have the opportunity to influence the arch of the show as it progresses.

The Roommates profile will also use a polling tool to gauge real-time audience opinions on character developments and specific aspects of the storyline.

The debut of Roommates on MySpaceTV is certainly a landmark for MySpace itself. And, the show seems pretty interesting too as it’s a show about a reality show! Sounds good to us, but it also reeks of fake reality!