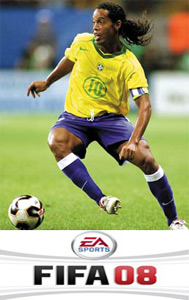 Guess who’s going to grace the FIFA 08 cover? It’s none other than two-time FIFA World Player of the Year, Ronaldinho! Electronic Arts announced this bit of news and said that the much awaited franchise game title from EA Sports will be available this Fall for the Xbox 360, PS2, PS3, PSP, Wii, Nintendo DS, PC and mobile platforms.

But, Ronaldinho will not be the only one on the FIFA 08 cover, as he is slated to be alongside other star players from other select teams worldwide.

Ronaldinho will join 2006 FIFA World Cup Golden Boot winner Miroslav Klose of Werder Bremen on the FIFA 08 packaging in Germany; rising star Sergio Ramos of Real Madris on the cover in Spain; attacking midfielder and captain of the Austrian national team Andreas Ivanschitz of Panathinaikos FC on the cover in Austria, and Swiss national Tranquillo Barnetta of Bayer Leverkusen on the packaging of Switzerland. Midfielder Florent Malouda of Olympique Lyonnais and winger Frank Ribery of Olympique Marseille will be paired with Ronaldinho on FIFA 08 covers in France. Those athletes appearing ob the FIFA 08 cover in North America and U.K will be revealed next month.

Now, the FIFA 08 game will be more realistic than ever. EA has revealed that most of the cover stars are participating in state-of-the-art body motion capture at a private facility in Barcelona, Spain. Their body movements, individual movies and playing styles are being captured, digitized and will soon become the life-like movement of the virtual players in future versions of EA’s FIFA games.

FIFA 08 is being developed by EA Canada in Vancouver, B.C.