The Nokia Lumia 1020 has arrived in Canada through carriers like Rogers and Telus and the latter service provider will also be playing host to the biggest Lumia phone until now, the Lumia 625. While the 1020 is available in shades of black and yellow, prospective customers can pick the other device up in black.

The main attraction of the Lumia 1020 is the second generation 41MP PureView camera complete with Carl Zeiss optics, OIS, Rich Recording, the Pro Camera application and a lot of other things. It can capture blur-free videos and clear pictures even in low light conditions and can be paired with the Nokia Camera Grip accessory complete with a tripod and a 1020mAh battery for professional photography. 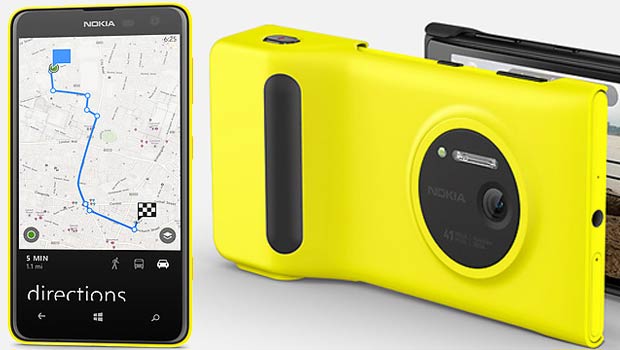 Moreover, the Windows Phone 8-enabled Nokia device offers an AMOLED multi-touch area of 4.5 inches layered with Corning Gorilla Glass 3 and renders visuals in 1280 x 768p resolution. It tags along a 1.2MP webcam and relies on a 1.5GHz dual core Qualcomm Snapdragon S4 and 2GB of RAM. You will find 32GB of internal memory and a 2000mAh battery with wireless charging support under the hood.

Up next is the Lumia 625, a mid-range WP8 device that has been fitted with a 4.7-inch WVGA touchscreen of 201ppi as well as a 1.2MP snapper on the front side and a 5MP auto focus camera with LED flash, 1080p video recording on the back surface. It too draws power from a 2000mAh battery, but operates with the help of a 1.2GHz dual core processor and 512MB of RAM. Its 8GB internal memory can be expanded further by up to 64GB.

The Nokia Lumia 1020 has been priced at $199.99, while the Lumia 625 can be purchased for free. Both gadgets require a two-year agreement and qualifying data plans. The Nokia Camera Grip will set you back by $75.