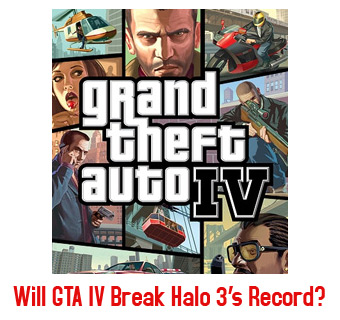 Rockstar Games and Take-Two Interactive are positive about Grand Theft Auto IV touching a milestone of $400 million in sales within the very first week of its release, outdoing the sales experienced by Halo 3.

GTA IV’s release is less than a fortnight away, on 29th April, and the two giants have already begun the pre-launch advertising publicity. However, the title’s pre-sales figures make Take-Two optimistic of achieving such numbers.

Apparently, Take-Two is keeping a sharp eye on the pre-sales that are being placed at retailers and it seems that around a whopping six million units have been pre-ordered which generates just a little above $400 million in revenues.

Halo 3 currently sits proud with the record for the biggest videogame launch with “Halo 3,” which grossed $300 million in its first week and sold about 5 million units.

GTA IV was initially slated for an October 16, 2007 launch. However last year in August, the Take Two officials decided the development team couldn’t simply meet the goal of perfecting the engine in time to meet the deadline.

GTA IV boasts multiplayer capabilities, with up to 15 modes, each of them supporting up to 16 players. There are five new missions that a player can complete, namely: “Call and Collect,” “Final Interview,” “Search and Delete,” “Deconstruction for Beginners” and “Truck Hustle.”

The standard version of the title will be priced at $59.99 and a Special Edition will also be rolled out at $89.99. The game will be adorned in a customized Grand Theft Auto metal safety deposit box.