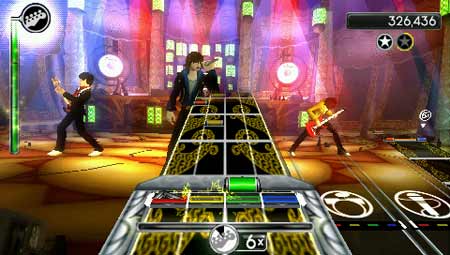 Rock Band Unplugged exclusively for PSP has been announced by MTV, Harmonix and EA. The game is scheduled to release in North America and Europe from June 9, 2009 onwards. In UK it will retail at £29.99.

The game packs in the traditional beat match gameplay along with key features of the like the overdrive and chords which are seen in the Rock Band and Rock Band 2. For PSP, players will have to use their hands as “peripherals” to control lead/bass guitars, drums and vocals.

“Harmonix delivers innovation with every game they develop and we are excited to continue our long-list of industry firsts with the Rock Band in-game wireless music store on the PSP system,” said Picunko.

The tracks featuring in Rock Band Unplugged are 40 master recordings which include nine exclusive new songs for PSP. Also, the downloadable content will be available exclusively for PSP in the in-game store backed by PlayStation Network.

The nine exclusive tracks are coming to PSP before being available as other DLC for other Rock Band versions and these are – 3 Doors Down – “Kryptonite”, AFI – “Miss Murder”, Alice in Chains – “Would?”, Audioslave – “Gasoline”, Black Tide – “Show Me the Way”, Blink 182 – “What’s My Age Again”, Freezepop – “Less Talk More Rokk”, Jackson 5 – “ABC” and Tenacious D – “Rock Your Socks”.