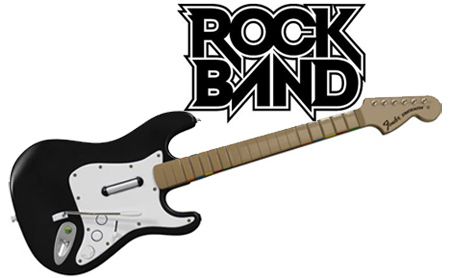 Harmonix, EA and MTV Games have announced that the much-awaited instrument peripherals for the hugely popular Rock Band video game will begin shipping to the US on February 12, 2008.

The standalone instrument peripherals that will soon be available for Rock Band include a Microphone, Drum and Guitar.

Thus, players will be able to compete in challenging play modes of the game like Microphone vs. Microphone, Drum vs., Drum and Guitar vs. Guitar. Basically, in such versus modes, gamers will be able to battle it out musically in “Score Duel” mode for the high score or even in the challenging “Tug-O-War” mode, where doing your best is the main thing.

Gamers will also be able to purchase a new wireless standalone guitar completing their Rock Band Social Edition Bundle or they could even chose to build their band piece by piece through the individual software and instruments.

The newly launched instruments are available for the Rock Band game on the Xbox 360, PlayStation 3, and PlayStation 2 consoles.