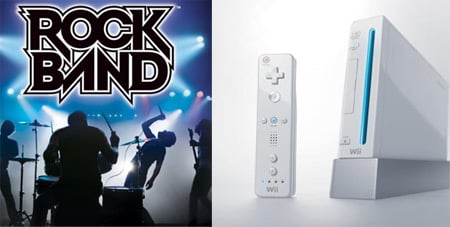 The Rock Band music video game by Harmonix became a huge hit ever since its launch in November 2007. However, at the time, the game was launched solely on the Xbox 360, PS3 and PS2 consoles. Now, news has come in that Rock Band will soon be available for the Nintendo Wii console as well!

Publisher of the game Electronic Arts has confirmed that Harmonix’s Rock Band is coming to the shiny white console. This bit of news was confirmed in EA’s quarterly earnings conference call.

John Riccitello, CEO, EA was quoted as saying, “What are probably the most interesting pieces (of the Rock Band business) right now is the coming launch on the Wii, the continued sales of the core platforms in North America and then (Rock Band’s) fiscal ’09 launch across Europe against the SKUs.”

“Frankly, for the balance of our Q4, and the first half of fiscal ’09, Rock Band’s a key focus,” he further went on to say.

Speculation of the arrival of Rock Band on the Wii platform took its roots in April 2007 when Harmonix CEO Alex Rigopulos said, “We will at some time, bring Rock Band to every (important) platform.” He also said that “the Wii mote is something that holds enormous promise.”

Rock Band is one music video game that has been under the scanner by critics and hardcore gamers alike. This is because the game builds on rival title Guitar Hero, but adds a whole new dimension with the introduction of vocals, drums and guitars.

As of now, no more details regarding the Wii version of Rock Band are available. However, the news of the arrival of the game on the shiny white console is enough to get everyone hot under the collar.