Risk of Rain 2: Celestial Portal [How To Open & Unlock Character]

The Risk of Rain 2: Celestial Portal is a passage to a secret world. You can lay hands on a powerful character on completing the mission in this hidden environment which is also known as a Hidden Realm.

ROR 2 is the second installment in the Risk of Rain series developed by Hopoo Studios. It is a rogue-like third-person shooter game in which each player controls an abandoned survivor on an unfamiliar planet.  It continues to enjoy immense popularity among gamers since it brings 3D technology to the already well-loved first version while also adding more survivors and challenges.

Players need to navigate harsh conditions, ward off dangerous monsters, and equip themselves by picking up the various valuable items found on the planet, in this unique offering.

Hopoo Studios is currently planning to release exciting new updates to make the game even better. So we can expect more interesting elements are coming in the future. Take for example the additions in March 2021 which include an unlockable survivor character called Bandit, new monsters, a boss named Grandparent and much more!

One of the major appeals of ROR 2 is the fun involved in discovering new items, and secret areas among other elements added to updates. The developers ensure players remain engrossed by revealing as little as possible in the patch notes.

So it can be hard to find some of these hidden elements. The Risk of Rain 2: Celestial Portal is one such item, and many players do not know how to discover it. Fret not, we’re going to break down all of the information you need to open this portal in a very simple way.

Portals are vital components in ROR 2. They are alien gateways to secret missions and worlds. The Celestial Portal leads to an environment called A Moment, Fractured. The latter challenge offers you the option to unlock a powerful character.

What is the Celestial Portal in Risk Of Rain 2?

The Risk of Rain 2 Celestial Portal is a secret passage for teleporting to a hidden area called A Moment, Fractured. This exotic world is a Hidden Realms Environment that cannot be accessed from the main stages which number at 9 currently.

How to find the Risk of Rain 2: Celestial Portal?

In case you’re wondering how to reach the Celestial Portal, you will have to loop at least once and then move to the 3rd stage to find it. What is a loop in ROR 2? It’s very simple — you have to go through five stages including the last one called Sky Meadow, for now. Once you reach it, you move (loop back) to the first stage again. You have to then complete the next 3 stages so that the portal you seek spawns.

Since the game developers keep adding more content, there might be some changes in the future. But for now, every time you choose to go back after 5 environments, the portal in question appears at the third stage. Hence, you will be able to see it on the 8th, 13th, 18th, 23rd stages and so on. 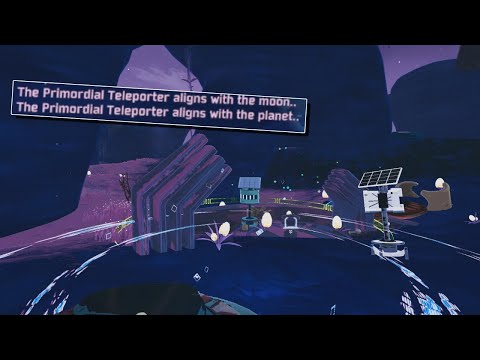 In order to loop, you have to activate the Primordial Teleporter which looks different from the regular teleporter, or artifact gate. Instead of featuring two horn-like prongs, it has eight flattish spires that are bent inwards. Avoid interacting with the base at the center. Instead, you must clump the prongs into two groups opposite to each other in order to ‘align it with the planet’ and loop back.

But if you decide not to go back once you hit the fifth environment, the spires have to be left in their default position in alignment to the planet. You can go to the center and press E to activate the teleporter. This transports you to the 6th and last stage called Commencement where you will meet Mithrix, the final boss, on Pertichor V’s moon and thus end the game by dying in combat or defeating him and escaping via a dropship.

Should you loop back and press on until the Rallypoint Delta or Scorched Acres stages, you will see a notification informing you that a Celestial Orb has appeared. Wait for the teleporter event to be completed and then jump into the newly spawned Celestial Portal instead of the teleporter in order to enter A Moment, Fractured.

How to open the Celestial Portal?

Once a Celestial Portal has spawned, you can interact with it to teleport into a secret environment in the game called A Moment, Fractured. You can then travel through the various floating islands in this world to unlock a powerful character, the Mercenary, on the last island.

Portals in ROR2 spawn arbitrarily, and the developers have not revealed any foolproof method of accessing them. It has been spotted on level 7 previously. How to increase the chances of spawning a Celestial Portal involves a lot of guesswork. Apart from the looping trick explained above, you may randomly come across it at any other level. So keep an eye out for an ‘orb alert‘ on your screen at all times.

The blue portal that spawns randomly next to teleporters in the game also loops you back. It can even appear in stage 5 (irrespective of the Primordial teleporter’s alignment) and will take you back to the first level via the Bazaar Between Time hidden realm.

How to unlock Mercenary Character?

Just like Risk of Rain 2: Acrid, the Mercenary character too possesses excellent melee range attacking abilities. He is highly agile and can slyly slip in or out of combat to confuse his enemies. His nimbleness enables him to strike at the right time and take out his targets with clean swipes.

To get the Mercenary character, finding the Celestial Portal is absolutely necessary. You need to first enter an environment called A Moment, Fractured by following the steps above to spawn the Celestial Portal. This hidden area has multiple islands floating in it. You need to make your way from one island to the next by using the blue rocks appearing between two of them as stepping stones to reach the last one.

You will find the gigantic Obelisk structure here. Upon interacting with it, the venerable-looking structure will prompt you with an offer to obliterate yourself. You can unlock the Mercenary character by accepting this proposal, thus completing the True Respite challenge. Do note that this ends your run and you’ll have to begin again.

What is the Obelisk?

The Obelisk is a gigantic immovable object found on the last island in an environment called A Moment, Fractured. It is formed from two enormous monoliths that stretch up to 30 meters. The Obelisk has a round cavity that glows with a shimmering blue light upon being activated.

Once you interact with the Obelisk, it will ask you if you want to obliterate yourself. If you agree to do so, you complete the True Respite challenge, annihilate your old character and unlock the Mercenary.

Alternatively, if you reject the Obelisk’s original offer, it will entice you again with a similar second proposal of obliterating yourself. If you accept this time, this act terminates the run for all the players. Each player receives 5 Lunar Coins.

You could also continue the run as your original character by denying this second proposal as well. You can thus leave the Obelisk realm without dying or sacrificing your character by moving through a portal that spawns to the right of the structure.

If you (or your teammate) have the Beads of Fealty lunar item, you can extend your run by a bit since obliterating at the Obelisk will transport you to a new hidden realms environment called A Moment, Whole. Get ready to beat one of four super-powered Twisted Scavenger bosses here.

In case you are successful, you get 10 Lunar Coins and a more rewarding and dignified death. Should you fail, you will die anyway.

Q. Where is the Celestial Portal in Risk of Rain 2?

A. The Celestial Portal Risk of Rain 2 is one of the many alien gateways that randomly spawn in various game stages. You will first see that a Celestial Orb has appeared and upon completing the teleporter task, it will let you access the portal. It is the only way in the game to reach an environment called A Moment, Fractured and unlock the Mercenary survivor. You can increase the chances of this portal appearing if you loop back from stage 5 and get to the third stage called Scorched Acres or Rallypoint Delta, as explained in detail above.

A. Portals in Risk of Rain are gateways to hidden, strange worlds. They spawn randomly in Risk of Rain, and you can interact with one to teleport to a new area in the game. For instance, the blue portal takes you to an environment called the Bazaar Between Time which is also the shop in ROR2.

Q. How do you obliterate yourself at the Obelisk in Risk of Rain 2?

A. Once you interact with the Obelisk in Risk of Rain 2, it will ask you if you want to obliterate yourself at the obelisk. You can declare your consent at the Obelisk to this offer by pressing the “E” key on your keyboard twice. At this point, your run terminates and a new character, the Mercenary, is unlocked. But if you have the Beads of Fealty on your person while accepting your obliteration, your run gets extended for a while in order to offer you a more rewarding death.

Q. How do I get to the hidden realm in ROR?

A. Hidden Realms are secret environments in Risk of Rain 2 that are inaccessible from the main stages. You need to fulfill specific requirements before you can reach these worlds. Each Hidden Realm has a different way to get to it.

For example, one of the Hidden Realms is an environment called A Moment, Fractured. It can be reached through a Celestial Portal. We’ve explained how to get to this above. Hidden Realms have unique missions and you will uncover exciting items or characters upon completing them.