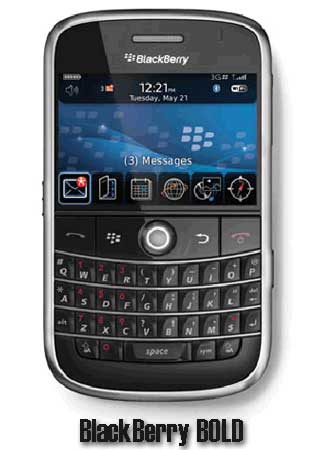 Another BlackBerry smartphone from Research In Motion (RIM) has hit the markets and is being touted as the iPhone’s competitor. Dubbed as Blackberry bold, the new phone was launched in Austria on Thursday.

“This is really the next generation of phones, and we are confident we can take on the competition,” said Philip Lander of RIM. The plus point of the BlackBerry Bold is believed to be the full QWERTY keyboard that it carries as “We believe our users want a keyboard, and that they are going to be very happy with the Bold for business and personal use,” said Lander.

According to some analysts, the drawback of iPhone is that the touch-screen proves to be no less use and more of a pain while writing lengthy e-mails. Also there were rumors that Apple may roll out iPhones with sliding keypad to woo business class.

The new BlackBerry Bold has reasons why it can beat the iPhone if it is aimed at the business segment. The smartphone comes with:

“The BlackBerry Bold is a breakthrough smartphone for both professional and personal use. We are very pleased to be working with A1 to provide Austrian customers with a superior mobile experience that further enhances the renowned functionality and usability of the industry leading BlackBerry solution,” said RIM chief operating officer Don Morrison during the launch in Austria.

Next, the phone will be launched in UK where the launch party will be seeing a performance by the pop group – The Feeling. It will be available in UK via T-Mobile by September 2008.