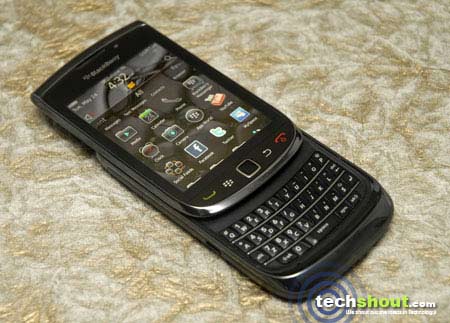 We were only too eager to find out what RIM had in store for us with the BlackBerry Torch 9800 handset. Now, we’re the sort of folks who can’t look at fruit salad without thinking BlackBerry or use adjectives like ‘Astound’ed or ‘Fascinate’d without recalling Nokia and Samsung. As the mobile phone war heats up in tech realm, we’ve been wondering who’ll be the one to come along and pitch the victory flag with a smug grin across the face. RIM has surprised us before by actually budging up and launching touchscreen handsets after we were already up to our noses in such devices playing for our attention. Here’s what happened when the Torch 9800 did reach out to us and beg for a review.

The BlackBerry Torch 9800 comes along in a neat black box with a power charger, USB cable, alternate connectors, software CD and the normal supply of booklets which you generally tend to find lodged along with any new product. Starting with the exterior, the device feels really solid in the hand and the smooth rubberized panel which hides the battery, SIM and memory card made us want to keep holding it. Though the Torch may not be the most lightweight gadget of its kind out in the market with the 5.6oz bulk, we’re of the opinion that this one would feel all wrong any lighter. ‘Shiny’ is at best the first description you’d think of upon beholding this phone. 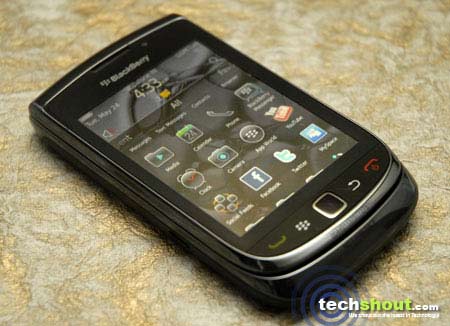 While it barely strays away from the signature BlackBerry design, the slider construct emboldens the distinction. It’s smoothly curvy along all the edges, with a dark silver frame around the touchscreen giving it a sensuously somber look. Placed just below the display are an optical trackpad and four tactile keys that supplement the touch functionality adequately. Apart from the black rubber panel marked by the BlackBerry logo, the rear part also advertises the AF 5MP camera. A couple of tactile keys for locking the phone and muting it show up on the top edge. The left side embeds a microUSB port, while on right balance volume rockers and a camera key, the last mentioned being assignable to execute any other dedicated function.

Is the look old fashioned? Well, the 14.6mm side view is certainly not as modest as the iPhone 4’s 9.3mm depth or the HTC Droid Incredible’s 11.9mm profile. But there are still some among us who prefer a beefy traditional handset with a touchscreen over a sleek, fully touch-dependent one. BlackBerry’s a label which is very difficult to grow out of, especially since the start of its BBM affair. It has built itself a good reputation as a communications wiz even if several elements need to catch up to the times. And the general feeling is that there’s still hope for RIM since word got out about the company transitioning their product portfolio to the QNX platform powering BlackBerry Tablet OS. 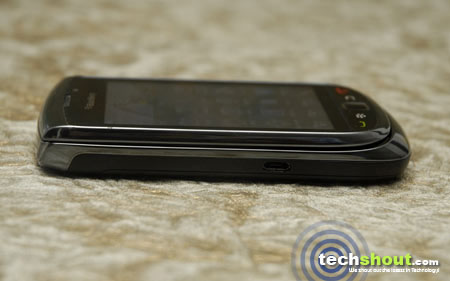 A slight push with the thumb is enough to convince the Torch 9800 to reveal the keypad and make it stay locked into place after sounding a satisfying click. The bloated keypad base ensures that you won’t find any excuse for dropping the phone while texting or mailing. For input options, you also get the virtual keypad which surfaces on the 3.2” HVGA 480 x 360p display. Yes, RIM hasn’t got around to putting higher resolution screens on their BlackBerrys or inserting more powerful chips into them. We’re assuming the company seems to think they can do just fine without the extra help for now. But the screen’s not easy on the eyes for anyone who regularly toys around with similar devices integrating HD displays.

The phone opens to a homescreen hosting the app launcher, an icon for choosing a profile, outright access to the very convenient universal search function and the ability to manage connections by giving the top margin of the display a tap. Applications and functions are marked out under All, Frequent, Downloads, Media and Favorites. Funny how the keypad is still the best thing about it in spite of the virtual one surfaced through the touchscreen. It’s difficult to aim accurately at the required keys and we’re just going to stick with the trusty old physical keypad. The browser experience is infinitely better on the Torch as compared to other BlackBerry members thanks to the new OS. Opening several web pages, zooming in or out of them with pinch-to-zoom gestures on the very responsive touchscreen is a pleasure indeed. Average is an apt adjective for describing the 5MP camera, audio quality and media playback features. 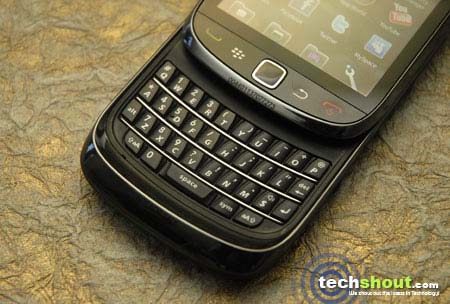 On the whole, the experience is woefully or pleasantly familiar depending on your point of view. The graphical menus are a nice touch. The battery stays faithful for a typical day of average usage and up to 32GB of microSD support means you shouldn’t actually fall short of storage space. Admittedly, that’s also because the Torch does not have great entertainment value in terms of the screen resolution and hoarding videos on it isn’t such a tempting idea. It mainly props itself nicely on call clarity, messaging and mailing functions just like any other BlackBerry. The new highlights are definitely the smooth and speedy web browsing ability, fluid UI and universal search function. 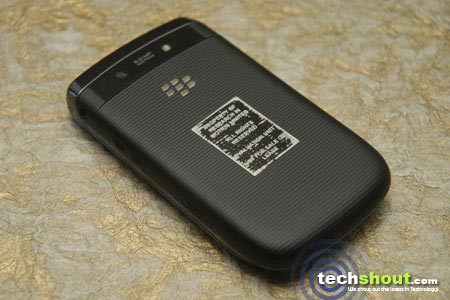 If one thing can be said about the phone, it’s that the BlackBerry Torch 9800 has a very responsive touchscreen made sweeter by accommodation of pinch-to-zoom. This is especially more appreciable when we’re browsing the web.

Speaking of surfing the internet, we cannot be thankful enough for the BlackBerry 6 OS which arrives with a Webkit-based browser.

The reworked UI is easily comprehensible, vibrant and a pleasure to navigate around.

Making calls through this handset is a major pain since we inadvertently keep invoking the speaker, hold, mute or ‘add participant’ option with our cheeks.

We could do with a higher resolution screen, better camera and processor with more muscle power.

Around Rs. 28,500 is not the sort of change regular people drop on a phone without asking for good reason to do so. The RIM BlackBerry Torch 9800 delivers a conveniently familiar, albeit boring, user experience. The key word to pick here is ‘familiar’. It has Wi-Fi, competent web browsing abilities and an excellent QWERTY keyboard for text input while ‘BBM’ing, mailing or performing any similar task. The 9800 smartphone is grabbing an 8.5 out of 10 rating from us. If we were to compare it to previous generation BlackBerry phones, we’d give it a 9 on 10.