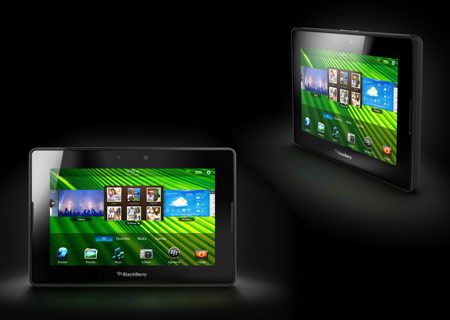 Bringing in an enhanced messaging experience along with the integration of various other essential features, the BlackBerry PlayBook OS 2.0 from RIM is now locked and loaded for release. However, PlayBook users will have to wait for a bit as the software update is scheduled to roll out starting next month only.

Besides incorporating messaging capabilities of social networks like Twitter, LinkedIn and many more into a single interface, the integrated messaging app also comes with a new inbox that allows users to conveniently manage personal and work email accounts. Each contact stored on the tablet can be embedded with various details comprising of email, conversations and status updates amongst others. And with the BlackBerry Bridge feature, BlackBerry-powered smartphones can be used as a keyboard and mouse for the PlayBook.

“BlackBerry PlayBook is already recognized for delivering powerful performance, true multi-tasking, advanced web browsing and HD multimedia in an ultra-portable design. With BlackBerry PlayBook OS 2.0 we are building on this strong foundation, as well as leveraging our strengths in communications, social integration and productivity, to allow people to use their BlackBerry PlayBook in new ways throughout the day,” commented Mike Lazaridis, President and Co-CEO at RIM.

With the launch of the BlackBerry PlayBook OS 2.0, the BlackBerry App World will be able to offer users some dedicated shelf space as well. Built specifically for RIM’s 7-inch tablet, a refreshed catalog of games and applications covering lifestyle and business productivity tools such as Angry Birds, Cut the Rope, Groupon, Thomson Reuters, Zinio and many more will be up for grabs.

The BlackBerry PlayBook OS 2.0 software update is slated for a February 2012 launch and it will be available as a free download for all PlayBook users. And yes, RIM and certain participating outlets are still selling the 64GB, 32GB and 16GB versions at the same $299 price. So now would be a good time for fans to grab one.