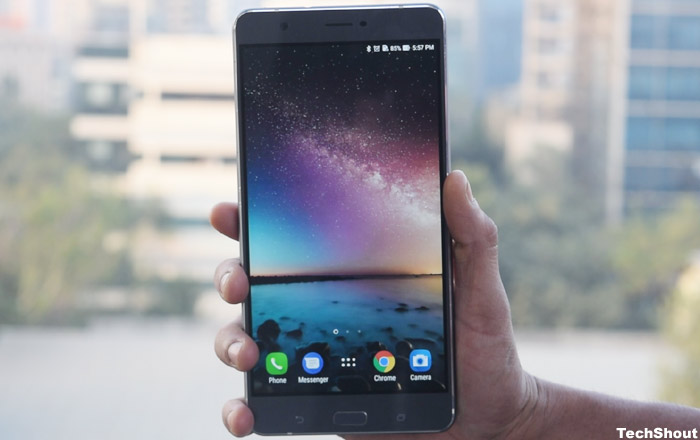 Each member of Asus’ ZenFone 3 series caters to a different crowd, ranging from the entry-level ZenFone 3 Laser and topping out at the eye-wateringly expensive ZenFone 3 Deluxe. We recently got our hands on one of the more interesting entries in the lineup, the ZenFone 3 Ultra. This giant comes with an array of mid-range specs stuffed behind a gargantuan 6.8-inch screen. The display allows it entry into the niche super-sized phablet club, joining the likes of the 6.44-inch Xiaomi Mi Max and 6.8-inch Lenovo Phab Plus. Unlike the latter two though, Asus’ almost-tablet has a premium price tag of Rs 49999. The cost and sheer size is probably enough to scare casual large panel enthusiasts away, leaving out those who want a powerful multimedia device that can bridge the gap between phones and tablets. But are the benefits of a big screen enough to justify parting with such a large amount of cash? We will attempt to get to the bottom of this dilemma in our review.

The ZenFone 3 Ultra creates quite an impression the moment it’s taken out of its box. Despite its large frame and considerable weight, the phone is comfortable to hold and doesn’t drag you down with its mass. Having said that, gripping the smartphone for long periods of time can cause fatigue. And attempting to fit it inside a pocket is a fool’s errand since it will almost always stick out and make walking slightly uncomfortable. 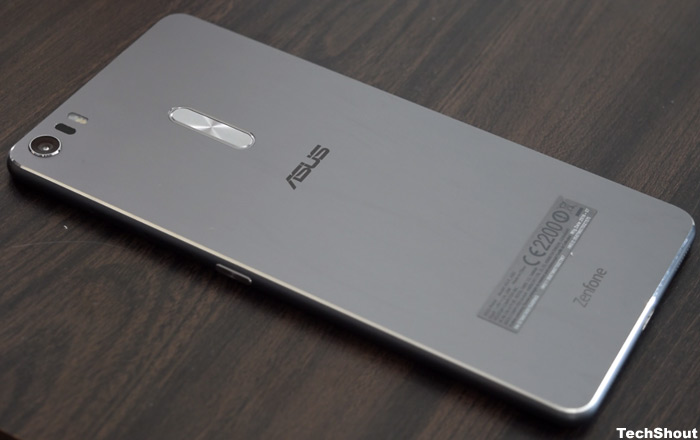 Otherwise, Asus has done a bang-up job when it comes to designing the ZenFone 3 Ultra. The eye-catching metal chamfered border looks attractive and the overall build quality is very solid. Slim bezels make sure the display is front-and-center. The left side of the phone has been left blank and the right features a power button, a nano-SIM slot, and a hybrid nano-SIM/microSD slot. The last is feels unnecessary since the phone’s massive body could have easily found space for a microSD and two SIM card slots.

The bottom portion makes room for a USB Type-C slot and dual speakers, while the back bears Asus’ signature rear-facing volume rockers. Though these buttons are easy to reach, we found that they were a bit hard to push. Other than adjusting sound, the keys can also be used to trigger the camera when the screen is switched off.

The ZenFone 3 Ultra’s 6.8-inch Gorilla Glass 4-layered screen offers 1080p resolution visuals and 324ppi pixel density that’s supplanted by the brand’s Tru2Life+ 4K TV-grade processor. The panel is crystal clear and can be viewed from all angles. While the display excels in most tasks, Quad HD resolution would have made more sense given the device’s cost and 6.8-inch size. 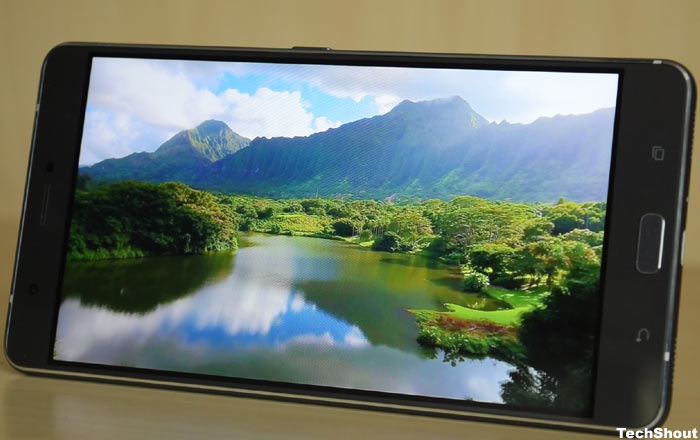 As for audio, Asus has thrown all kinds of enhancements at the phablet. Its bottom-facing stereo loudspeakers get the benefit of 5-magnet speakers and a NXP smart amp, while DTS Headphone: X virtual 7.1 surround sound technology improves the music heard over the included ZenEar S headphones. Overall, sound played over the former is loud and distortion-free and the latter is accurate in terms of audio reproduction. Asus has even provided for extra earbuds in various sizes. 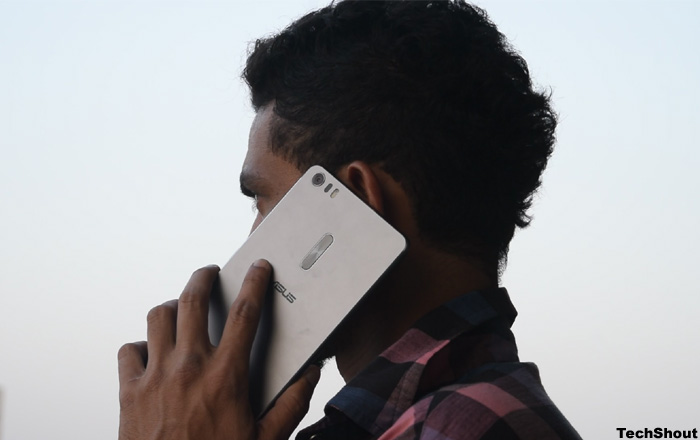 We faced no issues connecting to Wi-Fi and 4G networks. Bluetooth file transfers took place smoothly and calls were crystal clear. Asus has promised to add VoLTE support for the phone via a software update soon. The manufacturer has implemented an invisible antenna design in the ZenFone 3 Ultra to make sure the bands aren’t conspicuous on the all-metal body. The USB Type-C slot supports DisplayPort to transmit content to screens. However, you’ll have to buy a separate USB-C to DisplayPort adapter or dongle to do so.

Here we come to Asus’ Marshmallow-based ZenUI 3.0 interface. Customization continues to be king here, with hundreds of different ways to change every aspect of the ZenFone 3 Ultra. Among the more useful skills is the brand’s ZenMotion gestures which lets you open apps without having to wake up the screen. 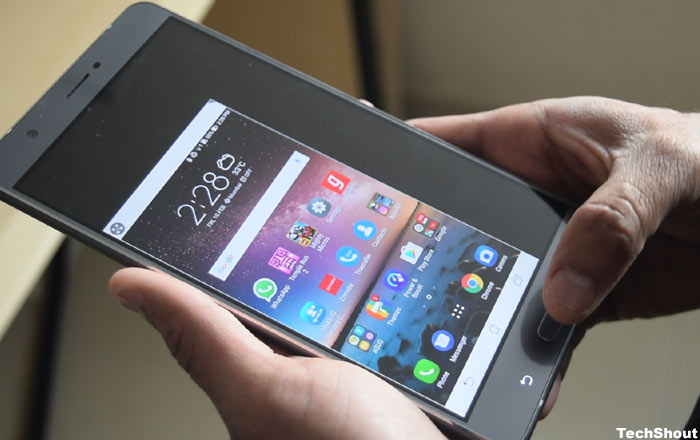 Bloatware has always been an issue with Asus phones in the past and the ZenFone 3 Ultra does little to change that reputation. Some like Puffin Browser and SimCity BuildIt can be removed, but others such as ZenCircle and PhotoCollage are here to stay. There’s even a Laser Ruler app that lets you point the phone’s laser at any object to measure how far away it is from you.

As is the norm with phablets, the ZenFone 3 Ultra features a one-handed mode that can be invoked by pressing the home button twice or tapping the option in the Quick Settings dropdown panel. The window can be resized and repositioned to your liking. Even the keyboard can be made bigger or smaller and moved around. Typing is pure bliss on the device because the large screen makes sure the keys aren’t smushed together. Also of note is its fingerprint scanner, which was fast and responsive no matter in which direction our finger was placed. 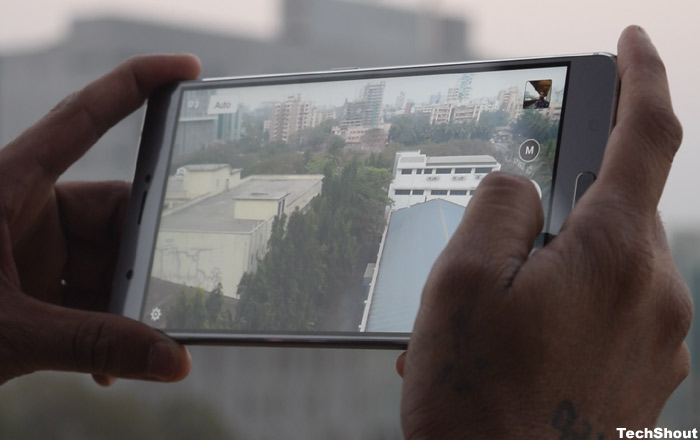 Asus has fixed a top-notch 23MP camera at the back of the ZenFone 3 Ultra. Its TriTech technology melds laser, phase detection, and continuous autofocus to guarantee split-second focusing. Overall, we found that the shooter performed as advertised. We were even able to click sharp photos while traveling on a moving train. Colors were generally accurate and images were detailed during well-lit conditions, less so at night. Indoor locations bring forth grain and a drop in sharpness.

Asus continues its previous practice of setting the default image quality lower than what the camera is actually capable of. In this case, it’s set at 16MP in a 16:9 ratio, as opposed to the 23MP resolution and 4:3 ratio combination it can go up to. There are quite a few modes to choose from here. Options like Time Rewind, GIF Animation, Manual, and Depth of Field are welcome add-ons, allowing you to experiment till you capture the perfect shot.

Coming to videos, the ZenFone 3 Ultra tops out at 4K resolution. If 1080p’s more your style, you can opt for full HD or full HD at 60fps. Videos come out great, with little to nitpick in terms of color or detail. The same can’t be said for the smartphone’s 8MP front-facing camera.

Selfies look good when there’s enough light to go around, but can be overexposed and low on detailing. The latter becomes a bigger problem in darker environments, further compounded by a heavy helping of grain. Speaking of selfies, it’s quite a precarious task trying to click a photo with one hand, given the smartphone’s heavy dimensions. Asus has a neat solution for that in the form of an easily accessible countdown timer which can be activated by pulling the shutter button upwards.

The ZenFone 3 Ultra has an octa-core Snapdragon 652 processor running the show. The SoC is more than up to the task of handling the giant’s day-to-day operations. We faced no lags during our time with the handset. Gaming was glitch-free by and large, with the massive display making it a pleasant experience. 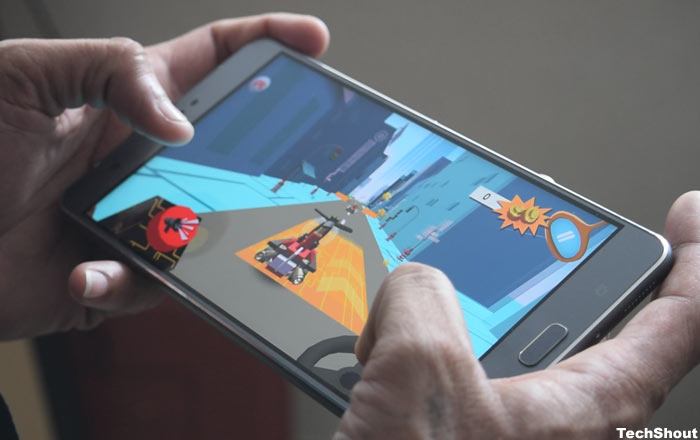 As for battery life, Asus has appropriately placed a 4600mAh unit to keep up with the 6.8-inch panel. The handset managed to make it through 2 days without needing to be plugged in during moderate usage. Fast charging makes refueling a breeze, managing to shoot the battery level from 10% to 100% in less than 2 hours. The phone does tend to get warm during this process though. The smartphone notably acts as a powerbank to other devices via a USB OTG cable.

The ZenFone 3 Ultra is clearly not meant for everyone. If you want to combine your tablet and smartphone requirements into one multimedia-focused device, then this handset is an easy choice. Unfortunately, Rs 49999 is too high a figure for a phone that carries decidedly mid-range specs, especially in comparison to the 6.44-inch Xiaomi Mi Max Prime which has the same Snapdragon 652 processor and double the memory at Rs 19999. As such, we’re going with 3.5 out of 5 stars for Asus’ mega phablet.