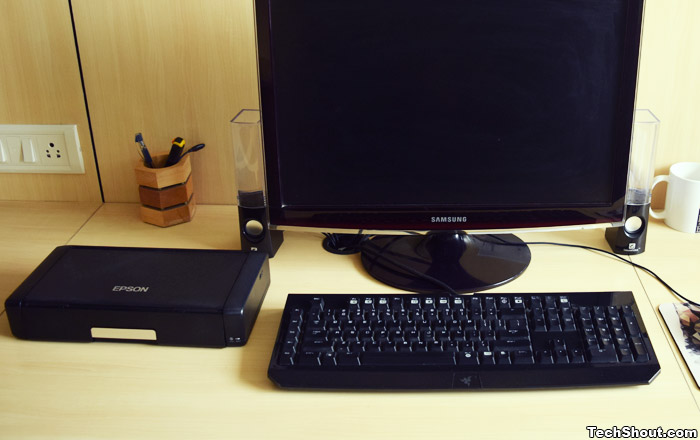 We’re trying not to give the Epson WorkForce WF-100 the side-eye as we write this review of the mobile printer that dreams should be made of. But it’s hard, seeing as it’s sitting here on our desk attempting to look as adorable as it did on the day we first met. But we’ve lifted the lid (literally) and seen what’s underneath, and know better than to fall under its spell again. Don’t get us wrong – it’s not the most awful printer you could buy. In fact, it has its redeeming qualities; but anyone who’s used to desktop printers may find the WF-100 frustrating at the worst of times and only somewhat satisfying when it’s behaving itself.

Design and specifications: The design of the Epson WorkForce WF-100 is truly the most charming aspect of the printer. It’s mobile in every way, being the size of a lunch box and just about as heavy (before you’ve eaten of course). Its 12.2 x 6.1 x 2.4-inch form and 1.6kg weight is unlike anything you’ll have seen in a printer before. When not in use, it can be stored with the silver strip facing up. The lid serves as the paper tray when it’s open and not protecting the device from knocks and bumps. The textured plastic surfaces feel pleasant to the touch and the build seems sturdy enough for mobile use. 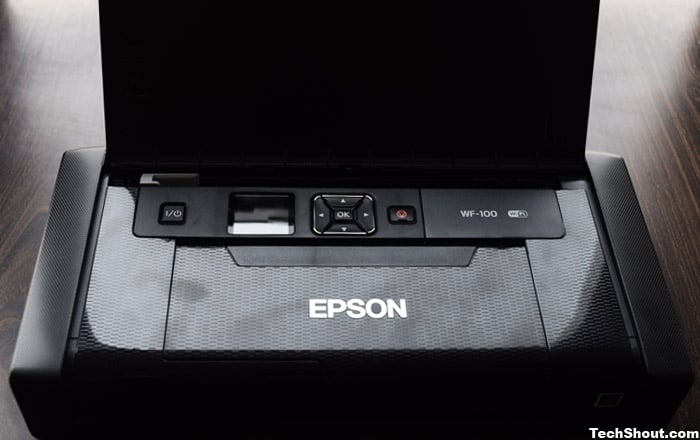 Being a wireless printer in every sense of the word, it connects to devices over Wi-Fi IEEE 802.11b/g/n and Wi-Fi Direct apart from Hi-Speed USB 2.0. It has a built-in lithium-ion battery so you don’t have to keep it hooked to a wall outlet all the time. The integrated powerhouse gets charged when the printer’s plugged in via the AC adapter. It also juices up through the micro USB port which additionally serves as a direct input into a PC or laptop. We tried out the WF-100 using a Windows 10 laptop, Windows XP PC (yes, XP), and Android as well as iPhone devices.

Setup process: Setting up the Epson WorkForce was a nightmare every step of the way. It took ages to download the necessary product updates and then showed us inexplicable error messages each time we tried to install most of the software. After 40 minutes of trying to bring everything up to date and frequently bumping into error alerts, we just gave up and decided to see if the printer would work anyway. It did. After making a mental note to disobey any further orders from the Epson popup messages that plagued us thereafter, we dove into our review.

You can start printing once you get the WorkForce and other involved devices on the same Wi-Fi network by typing in the password through the 1.4-inch color LCD. Doing so requires a lot of fiddling on the cursor and selection keys, though you eventually get there. The WF-100 is pretty much of an airhead for one that boasts of wireless connectivity – you have to go through the password entering process each time you switch between Wi-Fi and Wi-Fi Direct. User friendliness isn’t its forte. Also, it wouldn’t connect to our PC or laptop via USB due to an unexplained error after numerous tries. 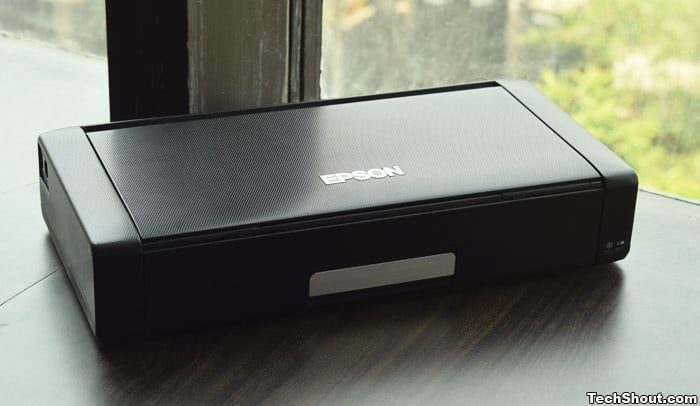 Print performance: The Epson WF-100 accommodates a three-ink color cartridge as well as a black tank. Forget about the yield mentioned by the company and get this – after printing out thirty three black and white A4 sheets, three 4 x 6-inch color photos on glossy paper as well as one and a quarter A4 pages in full color, we got a notification saying we were running out of ink! We guess we’d have been able to print even less if the nozzle had become clogged, thus requiring a cleanup. A lot of folks appear to be reporting blocked nozzles following infrequent use of the printer.

This inkjet printer is the slowest we’ve come across, and also the first to emit occasional farting noises. It takes a minute to print out two black and white A4 pages of average fill, while we timed its full color print production at 3.10 minutes! What’s more, the quality of print was inconsistent throughout our tests. 20 A4 sheets fit into the paper input area and there’s no output tray. This is fine on a flat surface like a table, but toes the line between annoying and just about tolerable when you’re an on-the-go professional (the kind of customer Epson’s targeting, by the way).

Pros: This Epson mobile printer has a very portable form factor and sturdy shell. It connects over Wi-Fi and Wi-Fi Direct and as well as via micro USB. It uses pigment ink which is fade-proof and water-resistant to a great degree. The best feature it offers is the in-built battery. Unlike several other printers we’ve tested, it connects easily to mobile devices running Android or iOS.

Cons: There’s no scan/copy function, output tray (probably understandable given its size) or Bluetooth connectivity. The print speed is slow, the quality is inconsistent and the yield per cartridge is low; the latter may be a device initializing thing. The maintenance box which must be replaced every few months adds to the already high the cost you have to pay for the privilege of mobile printing.

Based on five factors covering performance, design, user-friendliness, specifications and value for money, we’re giving the Epson WorkForce WF-100 a 3.3 out of 5 rating. It costs Rs 20,999, with the ink tanks marked between Rs 950 and Rs 1100 per cartridge.