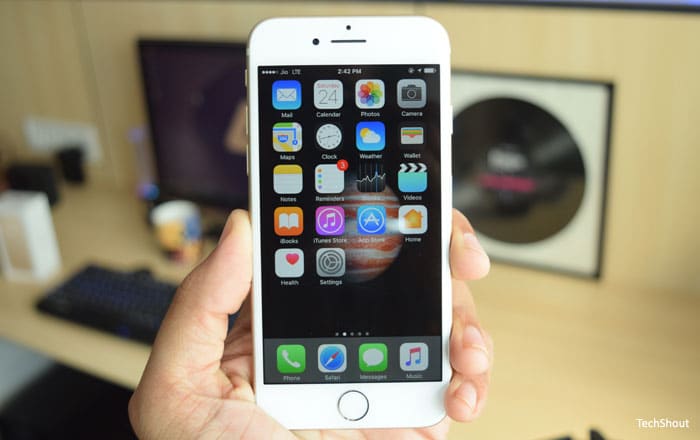 Even after months of its release the iPhone 7 still remains the talk of the town, and here we are with a review of it. This iteration is way different than the iPhone SE and only slightly different than the iPhone 6S. But that applies only to the looks. There’s a ton of things that have changed. For one, there’s the famous, or shall we say infamous exclusion of the headphone jack. On the plus side, this phone is water resistant, which is one major factor that gives it an edge over its closest competitor, the Google Pixel. And then there’s a new camera system, and a home button that doesn’t press like a normal button. All this for a starting price of Rs 60000 or $649. Worth it? Let’s find out.

Apart from the antenna lines having shifted towards the edges, nothing much has changed on the rear surface. Things remain the same at the front as well, except for a change in the resolution of the selfie camera which now offers 7-megapixel photos. The 4.7-inch Retina HD display retains its 3D Touch feature, and a variant of the same has also gone into the Home button. With the help of special haptic motors, this newly introduced key creates the illusion of pressing, but in reality, it’s not getting pressed at all. It takes about a day or two to get used to, but there’s no big difference in the user experience after that. And of course, this home button houses the Touch ID fingerprint scanner too. Even with all this onboard, the iPhone 7 can take a dunk in water and survive. Its IP67 water resistance is truly a great feature to have in a device. 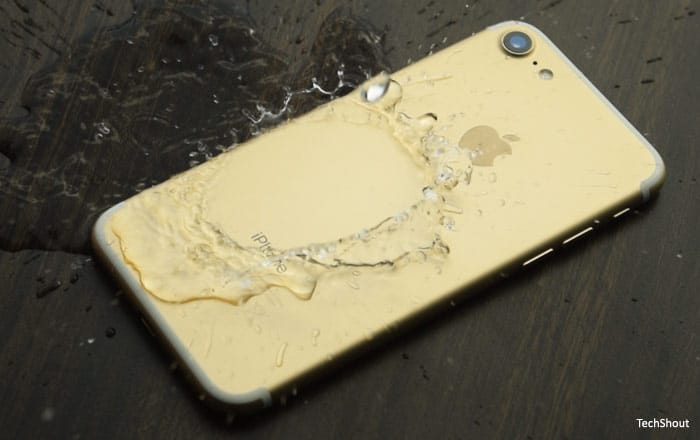 Neither at the top, nor at the bottom lays a headphone jack. How difficult could it have been to include it when almost every other phone in the world can fit a headphone jack into its body? This takes a lot away from the iPhone 7, especially because you can’t charge your device and listen to music on your earphones at the same time. The Lightning Earpods which come with it are thankfully accompanied by a 3.5mm adaptor to ensure that your old expensive headphones don’t go to waste. Quite a consolation that! Another consolation of sorts is that the iPhone finally has stereo speakers.

Its design is not a strongpoint for the iPhone 7, but it still translates into premium a feel when you hold it. The ergonomics are on point, and like always, it’s a pleasantly different feeling to hold the iPhone. 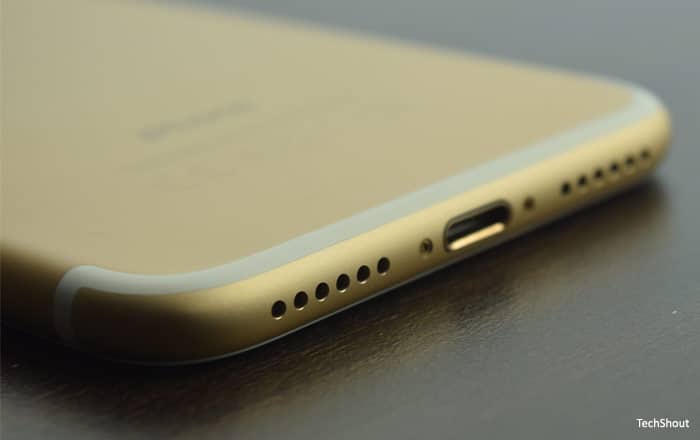 The iPhone 7 bears a 4.7-inch display with a resolution of 750 x 1334 pixels. This Retina HD panel has a wide color gamut which effectively means it can display truer colors than the sRGB displays on most other phones. Does this make up for the lack of higher resolution? Technically not, but the display never makes you realize that it’s low in resolution due to its overall sharpness and vividness. It’s also considerably bright, making it great for outdoor use. 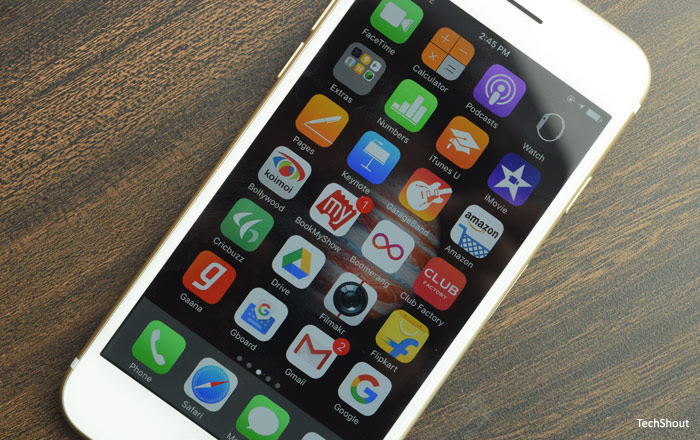 Coming to the sound, the stereo speakers are a pretty nice addition to the iPhone ecosystem. They make movies, videos and music more sharp and immersive than before. These speakers can provide loud yet very controlled sound. We did not notice any large difference in the sound coming from the Lightning Earpods when we compared it with that from the old Earpods. They are still a great music listening tool though.

A major addition to the iOS arsenal is the fresh iMessage. It’s versatile, and it’s got fun features that you’ll never stop discovering if you use it a lot. It’s definitely something no Android messaging app out there can match. The new Photos app however, is nothing original. It seems to have grabbed many features from Google Photos. Thanks to them, it can now automatically group your memories into named Albums, create movies out of them and let you easily find the pictures you’re looking for, using its advanced search parameters.

The Raise to Wake function always works perfectly and the widgets are now present right on the lockscreen. And then there’s the updated Siri which can finally access third-party apps. We have to say we loved this integration. We could easily book a cab with it even without touching the device. However, we did have a hard time getting Siri to understand our accent. This is something where Google Assistant wins by a big margin.

The 12-megapixel camera on the back of the iPhone 7 is just a slight improvement over the 6S. As for the iPhone 7 Plus, it’s a completely different story altogether. We’ll try to get our hands on that device as well, but for now, here’s what we think about the iPhone 7’s camera. Like all iPhone cameras, this one pushes the bar even higher. It’s excellent at capturing natural colors, and hence, the images are never oversaturated. That’s one area where it definitely beats the Pixel’s camera.

Even the low-light shots are always high on detailing. The wide f/1.8 aperture not only offers great depth of field, but it also helps the low light shots achieve great image quality. And as usual, the videos are glorious. We don’t mince words when we say that the iPhone 7’s camera is one of the best smartphone cameras in the world right now.

The 7-megapixel front camera should be a welcome upgrade for selfie enthusiasts. It produces sharp, natural looking pictures when in outdoor and well lit environments. It does have its limitations with low light images, but the self shot flash really does a good job at lighting up your selfies.

The A10 Fusion is easily one of the most, if not the most powerful mobile chipsets in the world right now. Naturally, the performance of the iPhone 7 has to be top-notch, and it is. At no point during this review did we think the device was lacking power in any way. The speed with which you can complete your tasks is just remarkable. The fast opening of apps, the brilliantly quick multitasking and the highly impressive gaming performance are all excellent evidences of the A10 Fusion chip’s power. 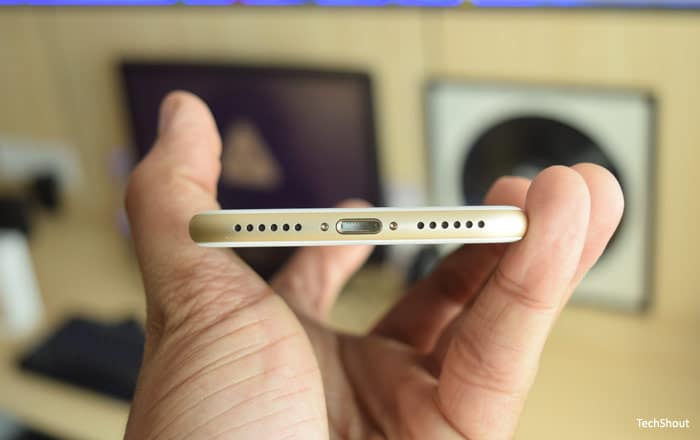 Two among the four cores on this chipset consume just 20 percent of the amount of power the other two cores do; which brings us to the battery life of the iPhone 7. There’s a 1960mAh battery inside this handset. During our daily use, we managed to keep the device running for around 11 to 12 hours on 4G with moderate usage. With heavy usage, the battery life dropped down to around 8 hours. The iPhone 7’s battery life is not remarkable, but it’s very good for the average user.

The iPhone 7 is an excellent phone by all means, but there’s no denying that it’s an expensive proposition. But is there enough in this device to make it worth that money? Yes there is! There’s waterproofing, a great camera, smoother performance and more. It beats the Pixel in the design department with its waterproofing and it only slightly beats the Galaxy S7 Edge in terms of performance. But, both these devices have that one thing the iPhone doesn’t – the headphone jack! So choose wisely! We’re giving it 4 out of 5 stars.