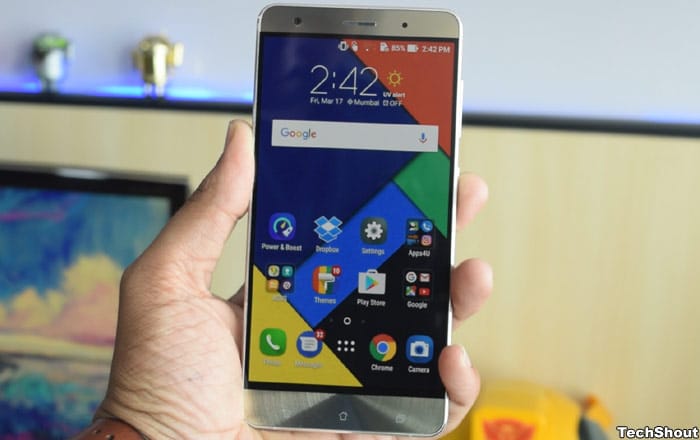 We here at TechShout have been picking apart various members of Asus’ ZenFone 3 series for quite a while now and walking away with mixed results. We recently got our hands on what is supposed to be the pinnacle of the lineup, the ZenFone 3 Deluxe. With a name like that, you’d expect a luxurious phone which boasts of the best of specs. You wouldn’t be completely wrong to assume this, but there are a few things that stop the handset from being the flagship killer it tries to be.

The ZenFone 3 Deluxe model we’ll be taking a look at today is the ZS570KL which is currently selling at Rs 49999. This particular variant packs 64GB of storage and a Snapdragon 820 processor. There’s also another ultimate version which offers up 256GB of ROM and a Snapdragon 821 SoC at Rs 62999. Expectations are naturally high from such lofty price tags and we’re going to suss out whether or not the ZS570KL lives up to them in our in-depth review. 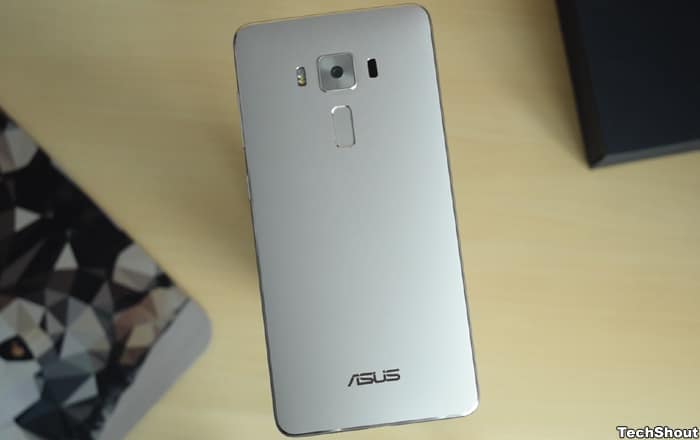 Asus is very proud of the fact that the ZenFone 3 Deluxe doesn’t have visible antenna bands on its back, squirreling them away into barely noticeable white squares at the top and bottom. While impressive, this will probably only please you if you are completely against having lines running along the back of your device.

The ZenFone 3 Deluxe feels pleasantly smooth and comfortable to hold thanks to its slightly curved back and 170g weight. Thin bezels flank the display, but the black border all around ruins the aesthetic somewhat. The chamfered edges and Asus’ distinctive concentric circle pattern make sure the smartphone catches the light no matter which angle it’s viewed from.

The ZenFone 3 Deluxe features a hybrid SIM card slot on the left that lets you place one micro-SIM and one nano-SIM or microSD card. It’s too bad Asus didn’t reserve space for all 3 to exist side-by-side. You’ll find a headphone jack on top, USB Type-C port and speakers at the bottom, and fingerprint scanner on the back. One minor quibble with the reader is that its narrow design meant that we sometimes had to reposition our finger a few times till we found the right spot to open the handset. 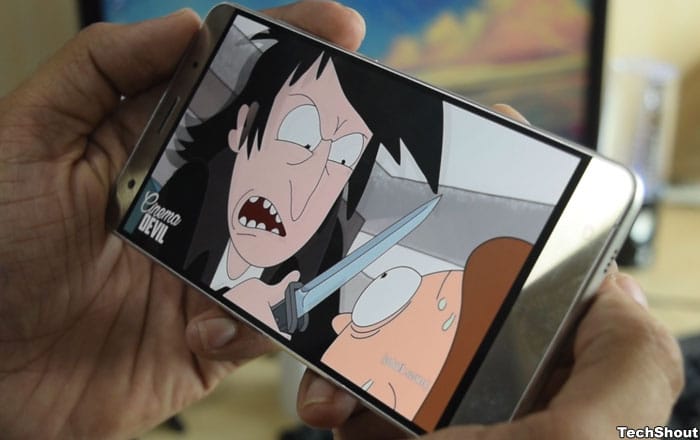 One would expect the ZenFone 3 Deluxe to carry a Quad HD resolution based on the premium segment it belongs to. Still, the 5.7-inch 1080p screen Asus has decided to go with doesn’t offer up anything to complain about. As can be expected from a Super AMOLED panel, the display boasts of deep blacks and vivid colors. Viewing angles are solid and the phone can get pretty bright.

As for sound, the Deluxe’s bottom-firing speaker gets decently loud for a single unit. However, we noticed a slight distortion at higher volumes. You’ll have to be careful not to place your hands on the speaker since this will block sound from escaping. The bundled ZenEar S earphones support high-res audio and deliver crisp sound. It comes with an in-line mic that features a single button to pause and play but no volume controls, a strange omission in our opinion. 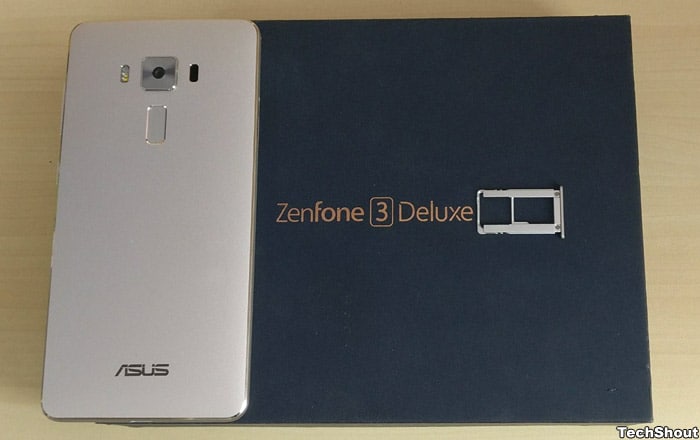 The ZenFone 3 Deluxe didn’t give us any problems in the connectivity department. Calls, Bluetooth file transfers, and 4G data usage were all in working order. Asus added VoLTE support via a software update in February 2017, so we were able to conduct clear VoLTE to VoLTE calls via our Reliance Jio SIM. It should be noted that both SIM card slots can’t connect to 3G/4G/VoLTE data simultaneously.

Asus began rolling out Nougat for the ZenFone 3 Deluxe in March 2017. Our unit hasn’t gotten the update yet, so it’s still stuck on Android 6.0.1 Marshmallow and all the ZenUI bloatware that comes on top. The company’s promised to cut down on unnecessary apps like Share Link, Audio Wizard, Flashlight, Splendid, and PC Suite. Some of these will live on in Settings, but thankfully won’t be cluttering up the main menu anymore.

That still leaves a lot of Asus apps littered about though. The UI can be very annoying at times, alerting you to pointless things like when an audio jack has been plugged in. We even found instances where system notifications popped up in broken English. For example, it asked for permission to activate glove mode by stating that ‘this mode will increase touch sensitivity when you wearing the gloves.’ Another instance saw it asking ‘Allow ZenUI Launcher to Allows the app to access information about your mail.?’

ZenUI offers some nifty shortcuts to get things done. For example, ZenMotion’s Touch Gesture tool lets you draw a Z to launch Gallery and double tap a sleeping screen to wake the device up. There’s also an Always-on option if you want to look at the time and date when the phone is on standby. The panel slowly eats away at the handset’s battery life, but this is mitigated to a certain extent by the AMOLED screen.

The ZenFone 3 Deluxe’s photography setup is a bit of a mixed bag. The 23MP rear camera excels in natural sunlight, capturing sharp and vibrant photos. There’s a small delay when shooting images one after the other, resulting in situations where you click the shutter button but the snapper lags behind by about a second. Moreover, OIS and EIS are not this camera’s strong suit, since even a little shake will derail a snap. We will say that Asus’ TriTech autofocus technology worked as advertised, managing to freeze both moving vehicles on the road and squirrels scurrying about. It’s not without its problems though. We noticed inconsistencies in the color rendering of some of the images. In one instance, a picture of a tree has one half of the sky shining blue and the other half drenched in white.

Things are less than rosy in low-light and night-time conditions too. The 23MP lens does fine during both, but there’s a significant increase in grain and drop in sharpness, in addition to the previously mentioned slowness. As for video, 4K footage comes out looking good, capturing scenes faithfully for the most part.

Taking up the task of shooting your selfies is an 8MP unit which opens up in beautification mode by default. While it certainly won’t win any prizes for best front-facing camera ever, the snapper gets the job done. Like the 23MP lens, natural light trumps indoor light thanks to a noticeable difference in quality. 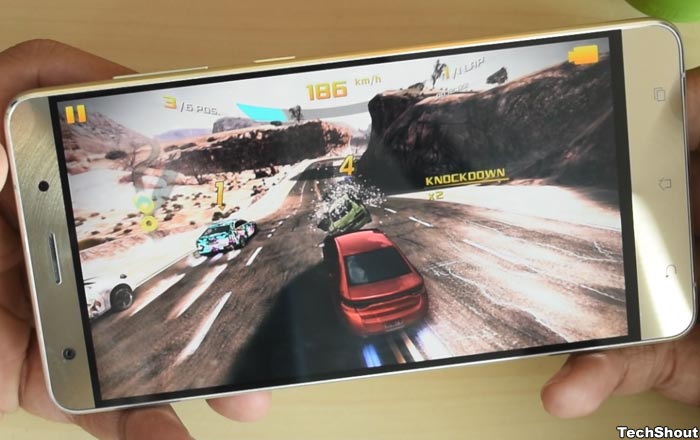 With a Snapdragon 820 processor and 6GB of RAM at its heart, the ZenFone 3 Deluxe was able to tackle any multitasking activities we threw its way with ease. Heavy-duty games and videos played smoothly with no glitches or hiccups. The 3000mAh battery performed well and easily lasted a day with moderate usage. Heavy usage will cut down on its life though. 2 hours of streaming music, watching YouTube videos, downloading apps, playing games, and surfing the net reduced the battery from 100% to 70%. Fast charging proves to be a useful weapon in such situations, with our unit going from 0% to full power in roughly 2 hours.

At Rs 49999, the ZenFone 3 Deluxe is a costly proposition. The figure seems too high especially when compared against phones like the Samsung Galaxy S7 which sells for around Rs 43400 these days. There’s also the Rs 27999 OnePlus 3 to consider. It’s difficult to recommend Asus’ handset over the others in view of that, unless you’re a big fan of not having visible antenna lines. As such, we’re going with 3.5 out of 5 stars for the ZenFone 3 Deluxe.