TechShout
Home Tech Reviews Vivo V5s Review: A selfie phone through and through 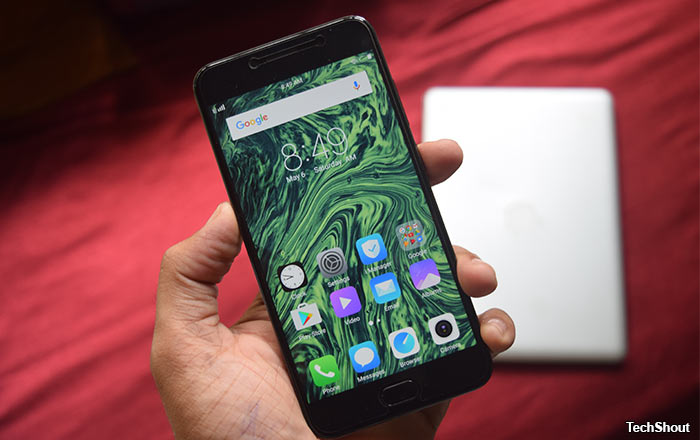 We now have yet another camera phone from Vivo in the form of the V5s. It’s no surprise that it draws most of our attention to its ability to take clear selfies since a 20MP front camera is its flagship feature. But a closer look at its specifications reveals that they mostly match those of the Vivo V5 which was launched around a year ago. The two major differences between them are an updated external design and 64GB of base storage rather than 32GB. But the price makes for a talking point for the wrong reasons. We took the device for a spin, and here we are with our review of it.

Like we said, the design has been given a small update which brings it more in line with the V5 Plus, the company’s unique dual front camera phone. And we already know where the V5 Plus got its design inspiration from. Be that as may, what you’re getting here is a smooth metal back surface which has its antenna lines hidden at the top. We do admit, this phone makes for a great view from all sides. 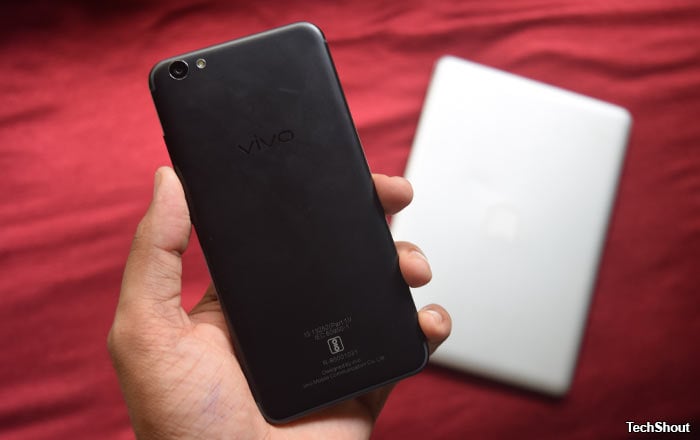 Also, there’s a new color option in the form of matte black. This one was actually last seen on the IPL Edition of the V5 Plus, and was well appreciated for its smooth texture and royal appearance. The back surface plays home to a 13MP f/2.2 camera and a single LED flash. At this price point, a higher resolution rear camera should have been put on the device.

Another compromise that buyers will have to deal with is the screen resolution which stays put at 720p for some reason. Where the Vivo V5s does not hold anything back is in the front camera department. Here, you’ll find a 20MP snapper with f/2.0 aperture and the famed Moonlight flash. Below the display is a fingerprint scanner which acts as a non-mechanical home button but does not press down. Beside it are the back and recent capacitive keys which are backlit. 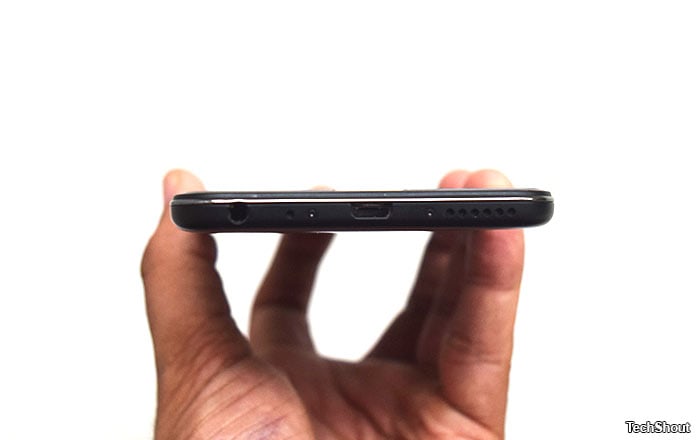 A single speaker sits at the bottom of the device, along with a microUSB port and a headphone jack. The power and volume keys on the right surface are well positioned. The V5s goes for a hybrid SIM arrangement, with its microSD card sot offering expandable storage of up to 256GB. This Vivo phone has been designed with finesse, and comes across as a premium phone from the first time you hold it.

Like we said, you get 1280 x 720p HD resolution on the 5.5-inch panel of the Vivo V5s, not 1920 x 1080p full HD. It’s an unfortunate decision that Vivo made here, given the cost of the phone. This display’s brightness one of its better aspects, and this panel executes color rendering pretty well. 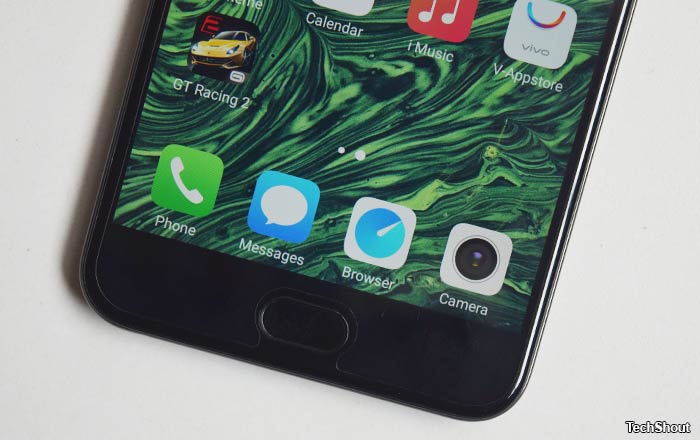 Sound has always been a strong point of Vivo phones, as Hi-Fi chips are a staple in them. The situation is no different for the V5s, and this results in great sound quality on headphones. If you’re among the few who makes use of smartphone speakers quite often, you won’t be disappointed either.

Funtouch OS has jumped to version 3.0, but no big changes have come along with it. In fact, this software is still based on Android 6.0 Marshmallow for some reason. It’s no surprise that the look and feel of the interface is pretty much similar to that of iOS. The icons and animations make this evident and so do the notification shade and the control center which you need to slide out from the bottom. 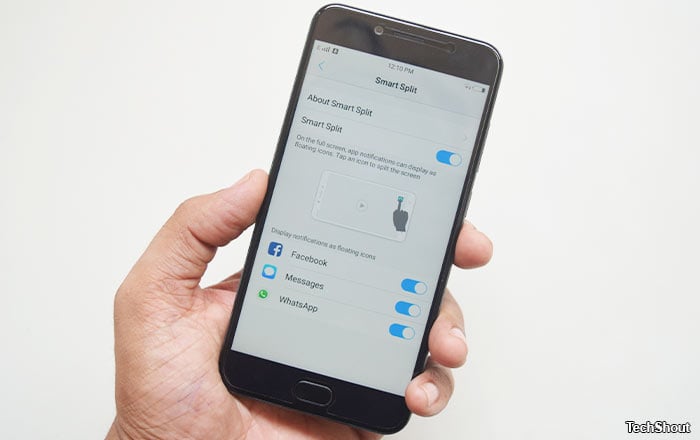 Like many Chinese ROMs out there, there is no dearth of features to take advantage of though. Things like Smart Split 2.0 for easy multitasking and App Clone for having two accounts on apps like WhatsApp make you come back to the Settings menu for discovering more such stuff. A one-handed mode, the ability to capture long screenshots, some very handy gesture based commands are just a few of the software attributes that make Funtouch OS 3.0 interesting.

We’ll first talk about the 20MP front camera on the V5s which ironically has is of higher resolution than the rear one. It’s no surprise that it delivers excellent selfies. In daylight, the sharpness levels in your selfies will be unlike what you’ve ever seen. In low light, keeping your hand extra steady will help you get some really nice selfies, but they will suffer from a drop in sharpness if you suffer from a quivering grip.

This phone offers a Group Selfie feature which asks you to pan your device to the left and right to capture more people, and then stitches the images together to make it seem like a wide angle lens is involved. It works as advertised, which is very impressive. One more thing that needs to be mentioned is the Moonlight flash which shines diffused light at you face, rather than bright harsh light. We’ve praised this feature on past Vivo offerings, and the same goes for the V5s.

The 13MP rear camera on the other hand is not so impressive. It delivers admirable shots, but a little peering makes it evident that the dynamic range of this shooter could have been way better. Its post processing is also likely to miss the mark sometimes, with regards to colors. And in low light, the problem of noise again stops the images from being highly attractive. That said, the camera on this phone isn’t entirely bad, but it certainly doesn’t seem like one that should be present on a handset costing around Rs 19000.

The MediaTek MT6750 processor with its octa core prowess, rules over this device from within, taking assistance from 4GB of RAM. This combination delivers respectable performance for multitasking as well as games. Though we must say that slight lags do make themselves seen every now and then. However, they’re not substantial enough to take anything away from this device. 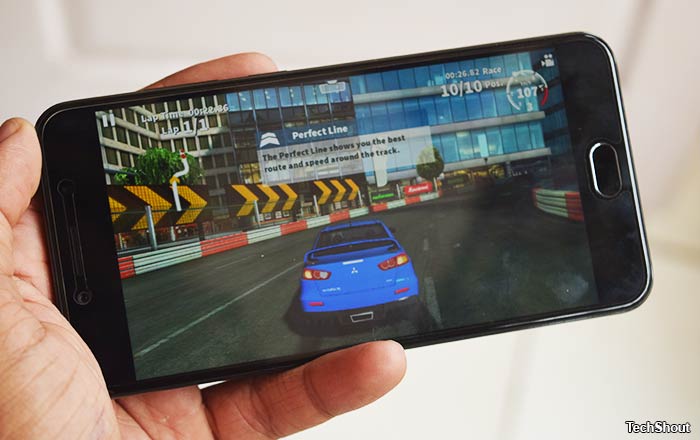 And in case you’re wondering, the fingerprint scanner is very responsive and fast. The battery life of the V5s is just as awesome as that of the original V5. The phone keeps going for one and a half day without running out of power, if you use it moderately. But the good news is that even heavy users can rest assured that it will run the entire day without needing a single minute’s charge.

Vivo would have had a great smartphone offering in its hand, had it priced the V5s lower. At a cheaper rate, the phone would have appealed to selfie enthusiasts as well as other buyers who are looking for good phones within a small budget. But with a tag of Rs 18990, the device will only appeal – and it indeed should – to selfie maniacs. If awesome selfies are everything you want from your device, you can go for this one with blindfolds on. But if you’re looking for a great all-round handset, a number of better options are available. We’re giving it 3 out of 5 stars.