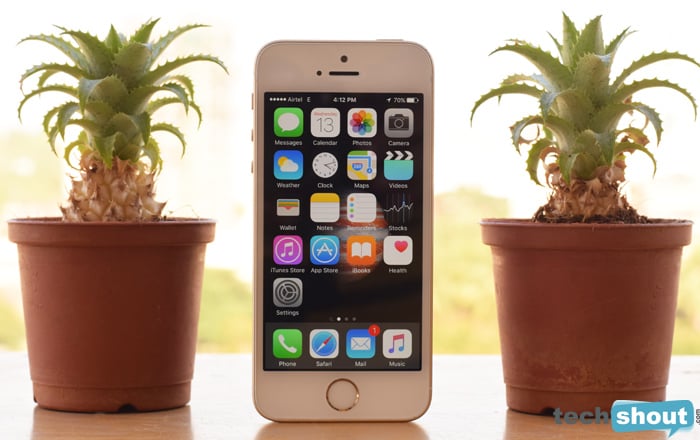 Apple’s launch of the iPhone SE signifies one thing more than anything else – the company cares about fans who weren’t quite impressed with the 4.7-inch and 5.5-inch iPhones that having been coming out since 2014. It is claimed that a sizeable audience still wants tiny 4-inch iPhones and if that’s the case, the SE comes as a nice gift for them. It’s an iPhone 5S lookalike, but it’s completely different on the inside. What’s more important is that this offering has the lowest launch price of any Apple smartphone ever. Yet it tags along some mighty impressive specs. If you can’t make up your mind on whether or not this is the best choice for you right now, we’re sure you’ll know by the end of this review; so let’s get straight into it.

Smartphone makers like to keep uniformity in the design approach of their subsequent devices until they revamp the style every few years. Apple is no different; but with the iPhone SE it has gone back to the design blueprint we believed it had retired with the 5S. The rounded edges and thin profiles of the 6 and 6S models have been ignored in favor of a much more angular design approach. You may know this already, but it’s incredibly hard to distinguish between the iPhone SE and the iPhone 5S if they are held beside each other. 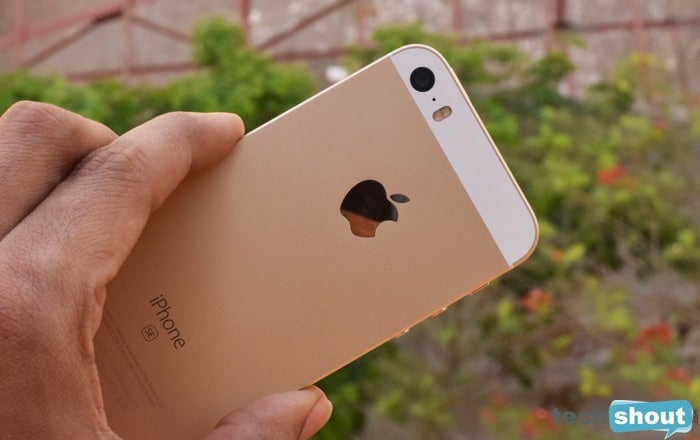 They have exactly the same footprint, and even weigh the same (just a difference of 1 gram) as well. The iPhone SE is perfectly sized for those with small hands. Which brings us to the main talking point – the smallness of the whole affair. We have a phone with a 4-inch display in a world that’s already used to phablets as large as 5.5 inches. Will someone who has used the latter feel comfortable going back to something as small as this device? 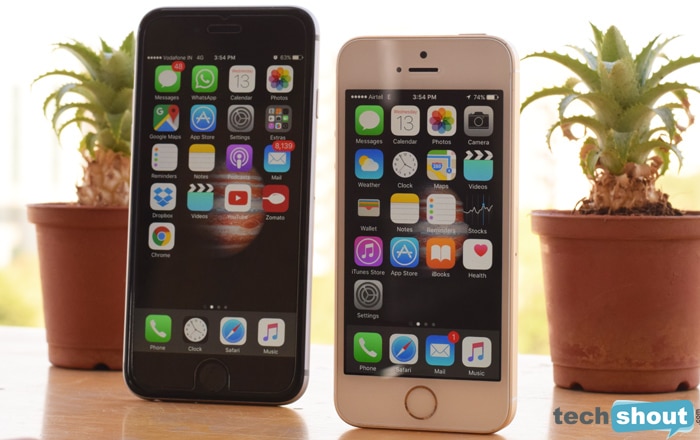 The answer is a no, but the iPhone SE will really tempt you to make that sacrifice. As for those who love 4-inch handsets – Apple’s prime target – their fingers would feel right at home while using the SE. You can easily have your thumb reach all four corners of the screen, allowing one-handed use. Plus, the iPhone SE is not as slippery as the new iPhones are, which is again an advantage. And that feeling of securely grasping the tiny device in your hand is also something. But for previous 5S users, the familiarly of the power button placement, the rounded volume keys, the premium aluminum body; all put the onus only on what’s inside the device.

Update: After using the iPhone SE for just about 10 days, the device had developed some pretty ugly scratches on its side surfaces which are made from aluminum. A case is definitely recommended for those who like to keep their handsets scratch-free. As a result of this, we are changing the rating for this phone from 4.5 stars to 4 stars.

It’s safe to say that the magic of the Retina display persists on the iPhone SE; the experience is smooth and the visuals are crisp. This screen gives you just the right amount of saturation, thus translating into more natural colors than on other panels. What might get you apprehensive is knowing that the phone has the exact same display as the one on the iPhone 5. At the end of the day, it all comes down to the overall experience, which is a positive one. The dense pixels stand at 326ppi, and the resolution is 1136 x 640 pixels. 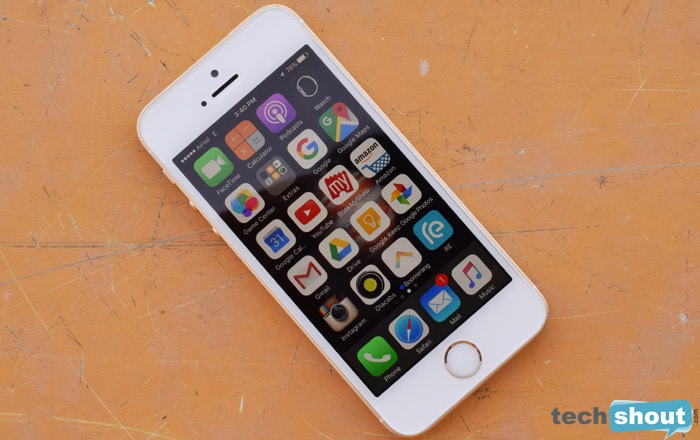 What’s missing though is the pressure sensitive 3D Touch technology, with all its added user interface functions. Cost cutting may be a reason for this exclusion, but there’s also the possibility that Apple wanted to keep the feature exclusive to the iPhone 6S range. Anyway, its absence should mean nothing to those who have never experienced it, but for those who have, it’ll take time getting used to not pressing hard on the display for accessing shortcuts. 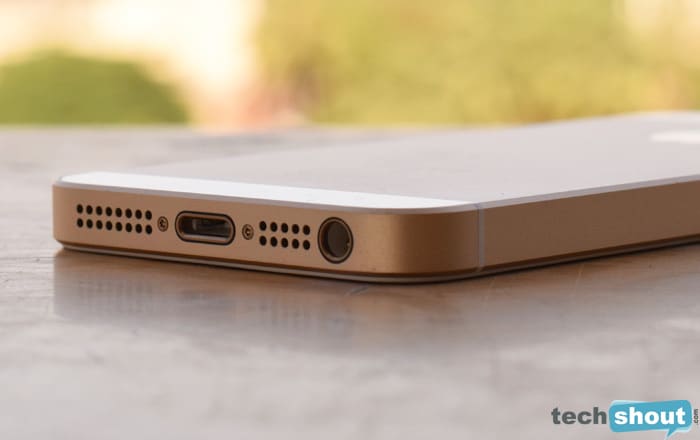 The iPhone SE has gone for a single speaker that’s placed at the bottom behind two grills. The audio coming from this assembly is definitely crunchy at low and mid volumes. If you crank it up too high, there’s considerable distortion though. This problem can of course be nullified by connecting the EarPods to the 3.5mm jack – which is perhaps about to die with the iPhone 7 – of the device.

iOS 9.3 is the talking point here, with Night Shift being its main addition. It’s a feature that’s aimed at soothing your eyes to ensure that you get a good night’s sleep. Whether it works in achieving the latter is debatable, but it does succeed in calming your eyes when they are dipped into the screen. The way Night Shift achieves this is not something new for those who have used apps like f.lux. This feature automatically adds more warmth to the color temperature of the display when evening strikes. It can do this based not only on time but also your location. You can even manually set it to be activated between a particular period. 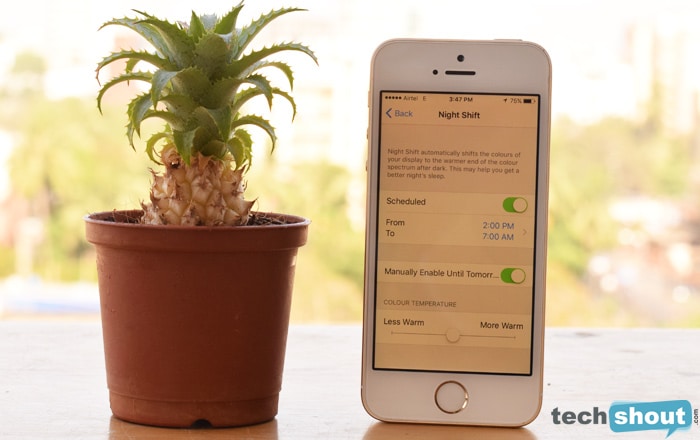 Most people are not comfortable with their notes being accessible to anyone who picks up their iPhone. Locking the entire Notes app is one option to avoid this. iOS 9.3 has brought with it the ability to protect individual notes inside the app with a password or Touch ID too. This really neat privacy feature is something we’d love to see being introduced for third-party apps like Google Drive and Dropbox as well, but we’re sure that isn’t happening anytime soon.

For those living in countries that have access to Apple’s News app, there are fresh additions targeted towards personalized suggestions. However, we weren’t able to test them since the app is not available in India. Apple’s highly detailed Health app is another major feature of iOS 9.3. Its already extensive set of offerings has been made richer by the addition of new interface elements. Furthermore, in the detailed views of Health data, you will now find suggested third-party apps aimed at tracking that particular data type. 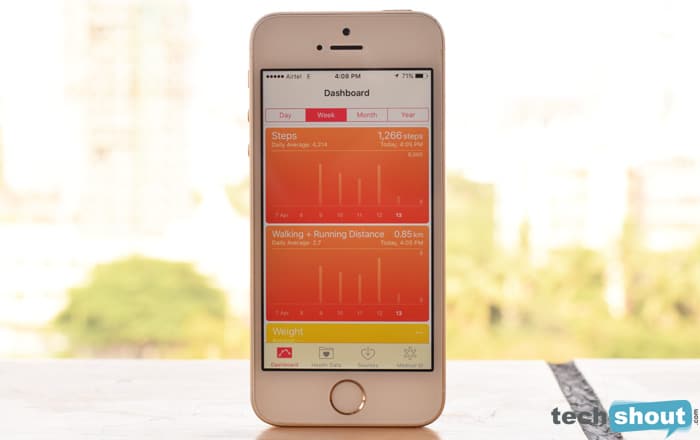 The always-on ‘Hey Siri’ integration which the iPhone 6S introduced, has carried over to the SE, and it works like it should. The overall iOS experience on the iPhone SE is extremely smooth. All the 9.3 additions summed up don’t add any huge impact to it, but the new features are definitely welcome.

Being a small and inexpensive iPhone, the SE could justifiably have gone for the same 8MP camera which the 5S carries on its back. However, Apple has equipped it with the 12MP snapper which is on the 6S smartphones. As a result, you’re not only getting 4K video support but also an f/2.2 aperture lens, phase detection autofocus and other advanced traits. What’s missing though is optical image stabilization, which is no surprise since it is anyway present only on the iPhone 6S Plus. 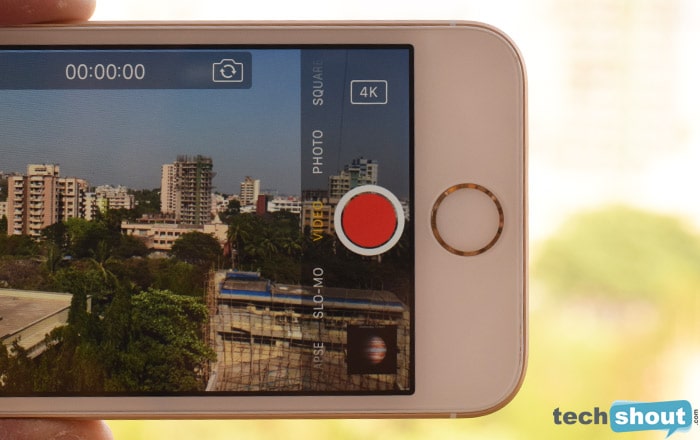 It was hence no shock that the iPhone SE was able to dole out incredible pictures and videos. There is impeccable accuracy in terms of color capture here, making the images appear truer than on other phones. And thanks to the f/2.2 lens, achieving a shallow depth of field in your photos is a piece of cake. The SE’s camera is also able to capture sharp details in its pictures. And brilliant assistance is provided by the simple yet versatile Camera app all throughout. The iPhone SE shines in low-light performance as well. There’s considerable grain in dimly lit environments, but the camera tries its best to keep the details alive. More importantly, the images don’t seem like they’ve been artificially filled with more light, which is remarkable.

The Slow Motion and Timelapse features remain the same. What’s a huge addition is 4K video support. It’s hard to believe that a 4-inch phone is able to dish out video clips with four times the resolution of 1080p. The videos come out sharp and ready to be inserted into any amateur film-making project you’re into. One compromise that Apple has made is the selfie camera which is a 1.2MP unit. The low resolution translates into slightly dated looking photographs, but folks who’re into posting them to social media won’t have much to complain about. Plus, these photographs are aided by an Apple innovation called Retina Flash which lights up the entire screen to add the effect of a flash in low light.

And while the company has skipped equipping this phone with 3D Touch, that hasn’t stopped it from granting the device the Live Photos feature. It captures a short video clip along with every photograph to allow you to experience the moment once again. You can watch these Live Photos by long-pressing on them. Apart from crowding your album, they also take up precious space in your handsets; so it’s recommended that people using 16GB iPhone SEs keep this feature turned off as it doesn’t really add a great deal to the overall camera experience.

Nothing less than the Apple A9 chipset has made its way into the iPhone SE. This is the same model used by the 6S devices that cost way more than what the small handset is being offered at. The overall performance of the iPhone SE is hence a breeze. We didn’t find any hiccups with its operations at any point. It’s simply a great feeling to multitask on the iPhone SE. Apps and games load quickly, and they seldom drop any frames. Unsurprisingly, the benchmark scores of this Apple handset match those of the 6S range, which are extremely impressive in the first place. Hence we decided to compare its readings with those of the iPhone 6. On AnTuTu, the SE grabbed a score of 82379, as opposed to which the iPhone 6 achieved 79491. We even put both handsets through 3DMark’s Unlimited Ice Storm test, and while the SE scored 19127, the 6 could only manage 17706. 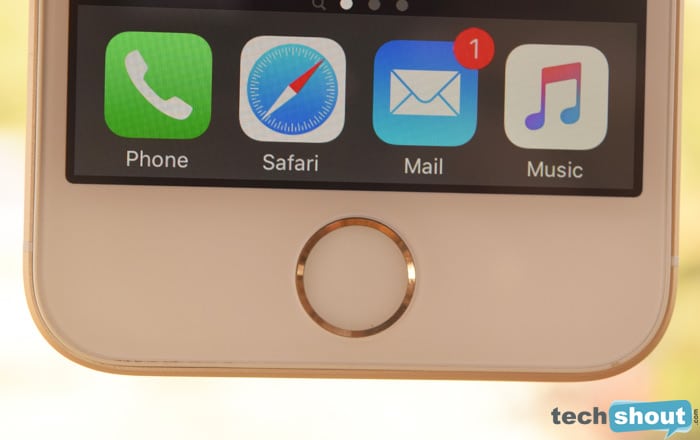 Despite being the same size as the iPhone 5S, the SE has been fitted with a larger power source. This 1624mAh battery is a major selling point for this phone. Battery life is extremely important these days, and with the iPhone SE having enough power in it to last for an entire day, it really is something to be considered by people on the go. Our usage consisted mainly of attending a few calls, constantly sending and receiving WhatsApp messages and clicking lots of photos and videos. Through all this, the device kept going for 12 hours and even after that, it had about 10 percent charge left on it.

It boils down to just one question in the end – are you fond of phones with small screens? If yes, then the iPhone SE is the best option available for you out there. It has defied Apple conventions by being priced so low, and that is yet another aspect it has going for it. However, spending Rs 39000 or $399 only gets you 16GB of storage which is a huge letdown (why aren’t you listening Apple?). You will need to spend Rs 49000 or $499 if you wish to go for the 64GB model. The overall experience of this smartphone makes it worth that cost. It’s fast, it has an exquisite camera that shoots 4K videos and more importantly, its battery is capable of lasting the entire day and then some. We’re giving the Apple iPhone SE 4 out of 5.