TechShout
Home Tech Reviews Asus ZenFone Zoom Review: Is it really worth zooming in on? 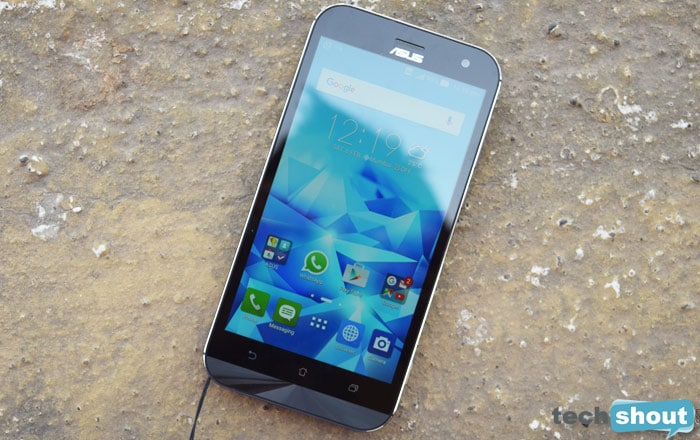 We’ve put the new Asus ZenFone Zoom through a review to see if it really has enough steam in it to replace your main camera. Stuffing optical zoom into a smartphone may be an incredibly difficult feat to manage, but it has indeed been achieved before. However, stuffing optical zoom inside a smartphone and yet not having its lens pop out from the back each time one wishes to snap a picture is something that has never been managed before. Asus has made the world’s thinnest 3x optical-zoom smartphone which means it can magnify subjects without compromising on picture quality while keeping all lens apparatus inside the body all the time. 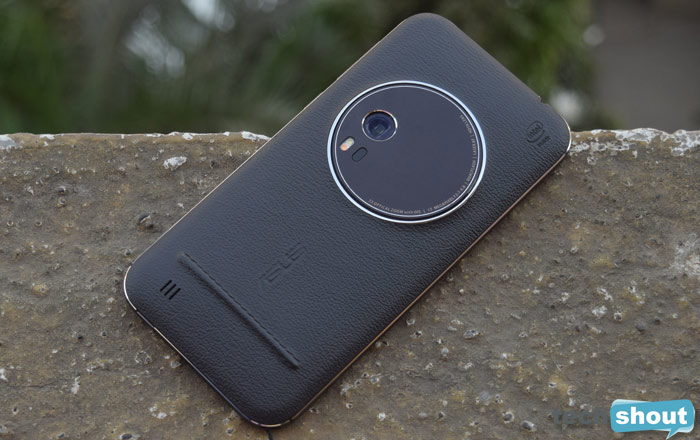 It does this with the help of a 10-element Hoya lens, making it the phone’s unique selling proposition. The price tag of Rs 37990 is a bit off-putting though, with offerings like the Nexus 6P and the Galaxy S6 Edge now going for similar amounts. The Asus ZenFone 2 Deluxe which holds many similarities – bar of course the 3x zoom lens – to the ZenFone Zoom is available now at Rs 22999. Is the lens apparatus commanding enough to warrant such a huge price premium? We’d need to take a deep look at it to find out, and that’s exactly what we’ll be doing. Let’s get rolling then.

Asus proudly tells you that the ZenFone Zoom is the world’s thinnest 3x optical-zoom smartphone. That isn’t immediately apparent since it comes across as a thick brick when you handle it for the first time. But then you begin to comprehend that with a lens mechanism of the ZenFone Zoom’s kind, it’s a great thing that the phone is just this thick; 12mm to be exact. Naturally, it is also heavier than most other smartphones out there. At 185gms, it is particularly heavy and certainly not a phone which you can fiddle with while lying on your bed. 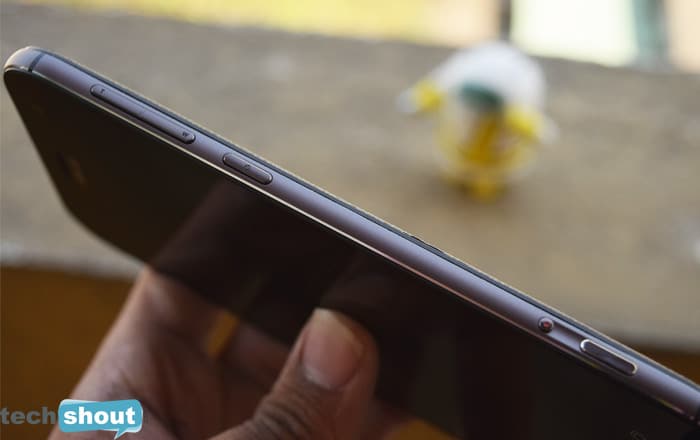 When you make a camera phone, you most certainly must add a dedicated camera button on its side. Asus has not only done that but has even given the device its very own record button which sits beside the shutter button. You can set them as triggers for launching the camera app even when the handset is in sleep mode which is great. Another useful addition is that that the volume buttons also act as zoom triggers when you’re using the phone’s camera. 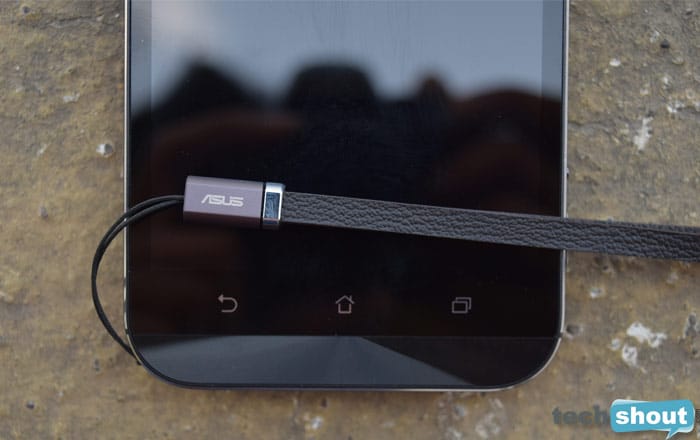 As opposed to the front surface which is typical Asus, the rear end is vastly different. It’s clearly reminiscent of 2013’s Nokia Lumia 1020 with its large circular camera housing featuring a smooth graphite-like material. As for the rest of the rear panel, it has been given a faux leather appearance with an aim of giving you the feel of holding DSLR cameras which come with similar surfaces. An Asus logo finds space below the camera module, but the Intel Inside logo seems quite forced if you ask us. The long lost practice of offering strap loops on phones has been brought back by the ZenFone Zoom. Not only that; Asus is also offering a leather strap along with the handset.

This phone rocks a 5.5-inch display bearing a resolution of 1080 x 1920 pixels; so there’s no change over the ZenFone 2. This panel has not quite left us impressed by any means. The maximum brightness output of 440 nits is low by today’s standards, and it sometimes forced us to crank it up to its highest when we were outdoors. Needless to say the battery life took a big hit due to this. The fact that the colors are oversaturated does not improve the visual experience as well. Asus’ very own Splendid app gives you mighty control over the display though, allowing you to tailor its temperature and its overall vividness, while also letting you individually adjust hue and saturation. 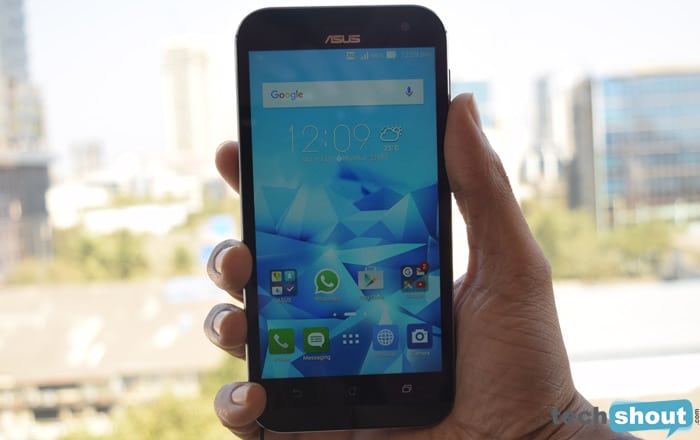 Depending on your preferences, ZenUI will either haunt you or delight you. This layer atop the phone’s Android 5.0 Lollipop base is full of useful stuff as well as bloatware that makes it hard to love ZenUI. The looks and icons are outdated but varied customization tools are indeed at your disposal to let you do something about it. For instance, you can choose your preferred font from the available variety or change the icon size. ZenUI even comes with a theme app which lets you download MIUI-like themes on your phone.

The main aim of this ROM seems to be that you won’t be required to download any app from the Play store at all. Asus has equipped its software with an app for almost everything. You have a smart to-do list app in Do It Later, a neat backup platform in WebStorage, 24/7 customer care support in MyAsus, a basic video editor in MiniMovie and many more such utilities. What’s important is that these apps do their jobs pretty well. And given that the phone comes with a whopping 128GB worth of stock storage over and above a microSD card slot, there’s no reason to feel the space crunch. So the question really is whether or not you prefer your app drawer to be littered with a million apps you can’t remove. Barring that, the experience is pretty neat, with smooth-flowing menus, an extremely detailed camera app (of course), lockscreen shortcuts, gesture support and such. A special mention goes to a hefty power management system which has tons of settings for you to control the battery consumption of your device.

Now for the main attraction ladies and gentlemen! Does the ZenFone Zoom really have enough spunk in its camera that you’d want it to replace your dedicated snapper? Let’s start from the start. Though this Asus phone houses a 13MP main camera on its back, it offers just 10MP photographs by default in order to have them fit into the 16:9 aspect ratio. You will need to head into the Camera app’s massive settings menu in order to switch the resolution to 13MP with a squarish 4:3 aspect ratio.

The 10-element Hoya setup works perfectly to offer optical zooming capabilities to this phone. But a grave problem lies in its sensor. It’s an outdated one, and this sadly translates into poor image quality. We’re talking washed out pictures with little to no details and sharpness, as well as bad color reproduction. What led Asus to granting such a sensor to such an important smartphone is something that’s hard to fathom. As you can see in the space right above, the images look nowhere close to having been clicked from a phone that costs Rs 37990. 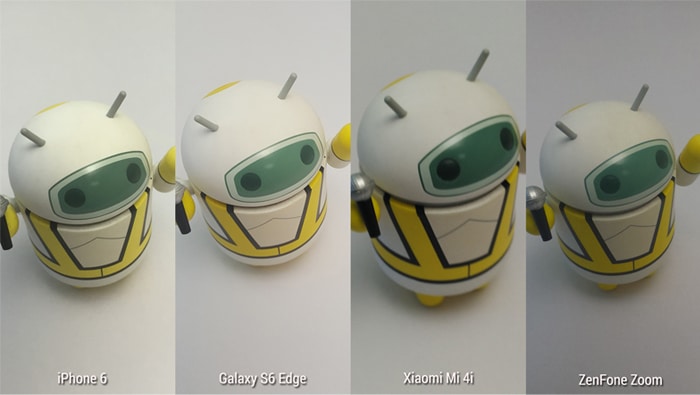 As an experiment, we not only compared its pictures with those from the Samsung Galaxy S6 Edge and the iPhone 6, but also from those of the extremely cheap Xiaomi Mi 4i. Not only was the ZenFone Zoom beaten by miles by the two high-end offerings, but it was also defeated by the cheap Xiaomi phone in terms of overall image quality. This makes the 3x optical zoom support the only weapon in the hardware arsenal of the device. What about the laser autofocus you ask? Well, it’s kind of a hit-or-miss. It claims to achieve focus on subjects within just 0.03 seconds, but that’s not always the case. More often than not, we found ourselves with completely off-focus clicks.

The Camera app of this Asus offering presents you with a plethora of different modes to play around with. You have a mode which lets you create GIF images, a Smart Remove mode which intelligently gets rid of moving objects from your landscapes, a customary night mode and many more. And then there’s of course a Manual mode which gives you control over everything from white balance and ISO to even the shutter speed. Yes, the Camera app is extremely versatile, but it is not at all helped by the flaw which the camera itself suffers from. 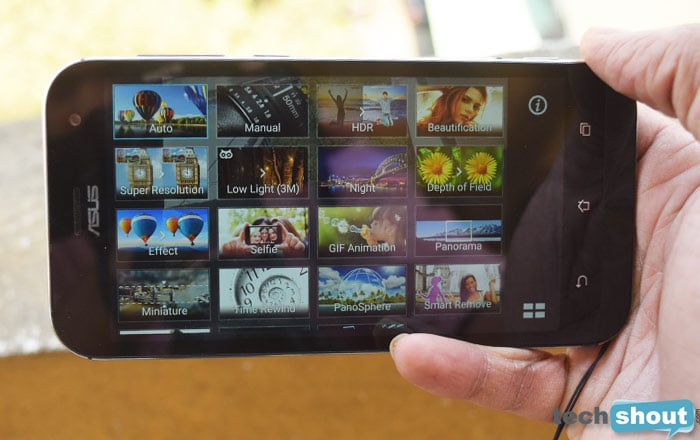 Coming to video, this is yet another aspect of the phone which we haven’t found to be exciting. It does maintain a pretty steady framerate, but the amount of detail you’d expect from such a phone is again absent. 4K video recording is unavailable, as the videos can go up to 1080p full HD at the most. Timelapse and Slow Motion modes are included to add to the variety. The front on this Asus handset offers 5MP photographs and features a nifty timer button for clicking selfies. Here too, the Camera app impresses with tricks such as panoramic selfies, slow motion video and more.

With 4GB worth of RAM riding a quad core Intel Atom Z3590 processor, there is absolutely no need to worry about the performance of this device. It offers silky smooth operations even in the most demanding of conditions. One wouldn’t expect this with the heavy ZenUI layer and the pre-installed apps, but the phone does return remarkable performance. Games like Leo’s Fortune and Asphalt 8 ran without any hiccups and any heating issues. It scored an impressive 62801 on AnTutu. 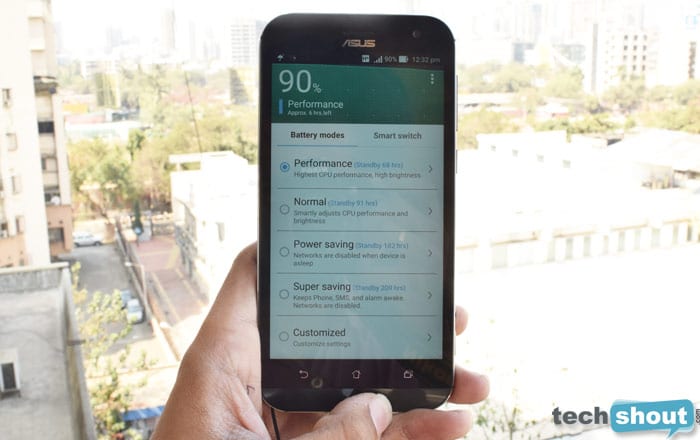 You can expect pretty impressive battery life from this phone. It provided us with some rather long hours of usage, and even when the battery was about to die, the device’s diverse and customizable power saver modes came to our rescue. You can easily expect to grab around 15 to 16 hours of juice from a single charge. And to top it all off, Asus has even blessed it with fast charging support.

The Asus ZenFone Zoom seems like a phone lost in time. It would have been a great flagship offering back in 2014, but it will find it incredibly difficult to compete against devices of today; especially due to its high asking amount of Rs 37990. There are a number of cheaper phones out there which can click far better photographs than this one. The only factor it has going its way is that its 3x optical zoom functionality, which we doubt is being demanded by a considerable chunk right now. It does feature great battery life and remarkable performance, but that’s again something you find in cheaper devices out there. We’re going to give it 2.5 out of 5 stars.