We’ve reviewed the Motorola Moto X (2014) by employing it our daily driver for the past two weeks, which effectively means we have a lot to talk about it. And since you’re game to be the audience, we should get going with the observations quickly. But first, a little introduction. This smartphone succeeds the first Moto X, and naturally gains some upgrades over its predecessor. It’s still ultra-customizable in terms of colors and materials, but you still cannot get all that in India. Here, a 16GB black model with a normal back (Rs 31999), a 16GB white one with a bamboo back (Rs 33999) and a 16GB black one with a leather back (Rs 33999) can be bought. Not to mention, Flipkart is the only place you can purchase it from. 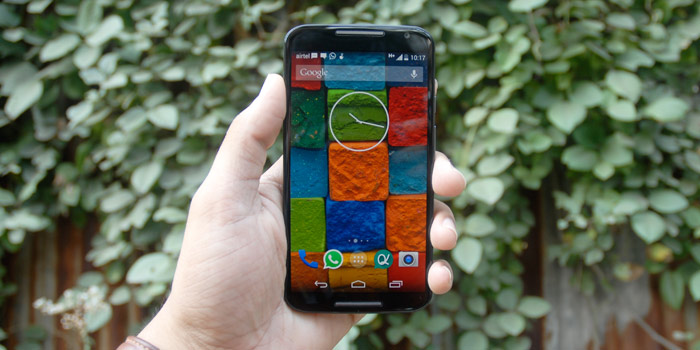 To gain a perspective, let us first see what we loved and loathed about last year’s Moto X. This innovative smartphone from the rebranded Motorola was distinguished by its simplistic choices. While other companies were opting for high-end specs on their flagships, this one impressed even with its mid-range components. What set it apart were its awesome software additions like Touchless Control, Active Display and more. The camera was something we weren’t quite happy about, apart from the fact that there was no expandable storage. While the latter gripe still exists on the 2014 model, let us see if Motorola has succeeded in improving upon its predecessor and giving us another awesome phone or not.

On paper, this year’s model is a lot more eye-grabbing than the one last year. The 720p HD display has been turned into a 1080p full HD one, while its size has been increased from 4.7 inches to 5.2 inches. The technology powering the panel is still Super AMOLED though. One more big change is the 2.5GHz quad core Qualcomm Snapdragon 801 processor. This is something worth turning your attention towards, since the previous version housed a custom-designed chipset featuring a dual core processor, a quad core graphics unit and two separate cores to take care of the always-on functions of the device without draining the battery. It’s hence a concern that Motorola has decided to add just a slightly upgraded battery in the form of a 2300mAh unit as compared to the 2200mAh power pack from the 2013 model. 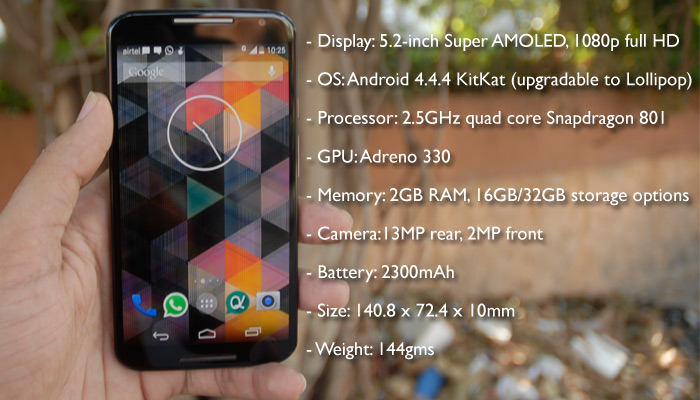 Anyway, the insides of this device also include 2GB worth of RAM, while a 13MP rear camera that’s accompanied by a peculiar dual LED flash ring, forms a highlight on the exterior. Selfie enthusiasts have nothing to be excited about, as a 2MP front-facing snapper has made its way onto the device. It’s no big surprise that a near-vanilla version of the Android 4.4 KitKat has been infused inside the Motorola handset, as it had proved to be one of the key selling points of its predecessor as well as the company’s other smartphones like the Moto G and the Moto E. Apart from the usual array of sensors, the Motorola Moto X (2014) plays home to four infrared motion sensors, the reason for which we’ll be explaining later.

If you’re a fan of metal on smartphones, you’ll be pleased to know that Motorola has blessed this device with a metal frame that binds the hardware together. And more than anything, it contributes a lot towards the feel of the device. Holding the new X in your hands is a joy thanks to its great build and its near-perfect 144-gram weight. The rear surface is also well built, with its neat bulge that most definitely contributes to a better grip. The Motorola dimple has grown in size, and according to us, it has become a bit uglier than the one on the Moto X (1st gen) that we had loved. But like we’ve said about the previous model, placing your index finger in this small pit gives you a subtle sense of grip on it that’s hard to explain. This is especially experienced during calls when your phone is placed on your ear. 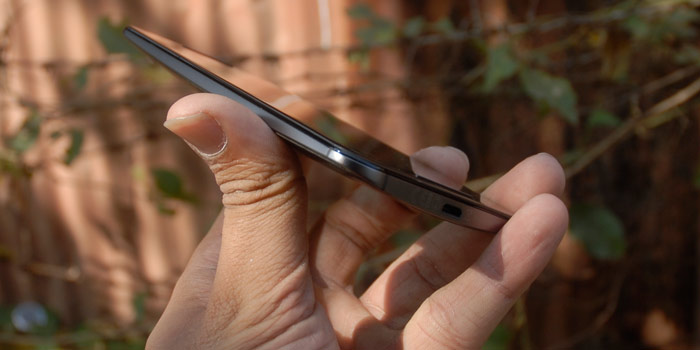 A ribbed power button is a nice change, but other than that, the side surfaces are pretty standard. New on the front surface are what like stereo speaker grills but are actually two separate grills, one housing the earpiece and the other, a mono speaker. With even the new Moto G (2014) having stereo speakers onboard, we wonder why Motorola hasn’t blessed its flagship with the same setup. A new design change is the ring flash that surrounds the camera lens with an aim of diffusing the dual LED flash so that the light is not harsh and does not create a lot of shadows. It’s a good choice since that’s the only reason people usually avoid using the flash while clicking pictures. 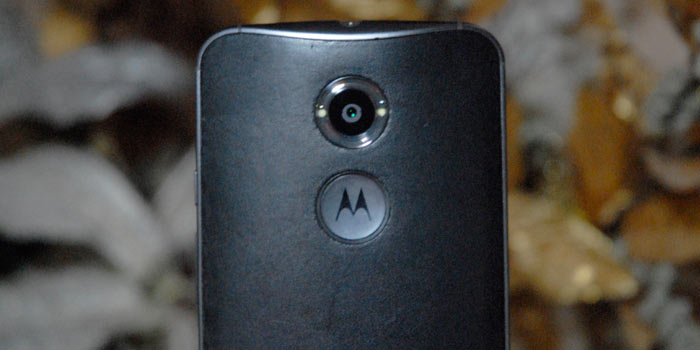 Being a Super AMOLED display, the panel that resets atop the Motorola Moto X (2014) gains perfectly vivid colors that are complemented by great contrast. The visuals seem livelier than ever on this excellent display, and you’ll even be amazed by the viewing angles it brings with it. This 5.2-inch panel is one of the best parts of this phone, and everything about it will keep impressing you time and again. Outdoor visibility is not an issue as well, owing to the awesome color reproduction of the device’s screen. There’s no doubt that we stand extremely impressed by the display on this Motorola device. 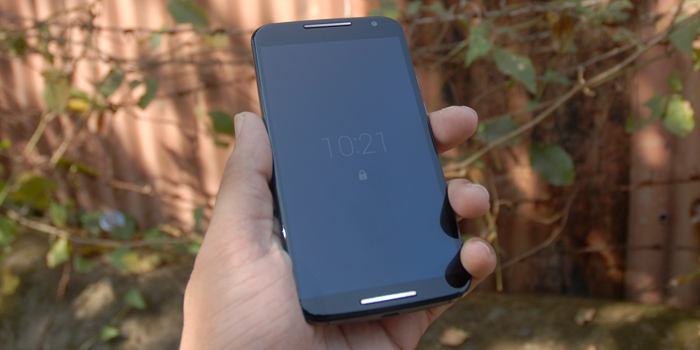 Like its predecessor, one of the strong suits of this smartphone is the fact that it comes with a near-stock version of the Android OS that Google wants you to have. The only software additions it does add to the user experience, actually turn out to be quite useful, as opposed to the tremendously unneeded bloatware which some manufacturers end up tacking their phones with. Along with all the stock features of the Android 4.4 KitKat OS, this 2014 model of the Motorola flagship phone offers a great deal of new software features that expand upon those of the 2013 model in a big way.

So you have Moto Voice which can now respond to customized commands rather than just ‘Okay Google Now.’ This means, you can actually name your device anything you wish to and call out to it when you want it to perform any task for you (even when it’s sleeping, mind you). So, ‘Okay Google Now’ can be replaced now with ‘Okay Sherlock,’ ‘Okay Watson,’ or whatever the hell you want. In the space above, we talked about the special infrared sensors which this handset has been blessed with. They’re there for serving two new features. These nearly invisible units sense the activity that’s happening around your phone. So, if you just hover your hand above the display of the phone, you are able to silence incoming calls or even snooze alarms. The infrared sensors even allow the Moto X to wake up the screen, the second your hand approaches for picking it up. 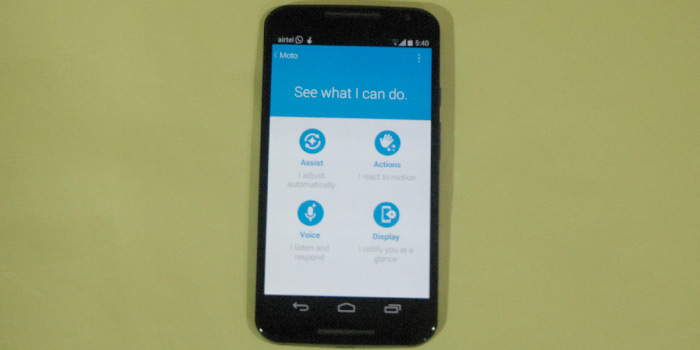 Moto Display is a trait which takes advantage of the Super AMOLED panel to show your notifications without asking you to wake the entire screen up. It has received some minor yet useful improvements on the new model. Two flicks of the wrist will let you launch the Moto X’s camera irrespective of it being in sleep mode or running a particular app. This is made possible by the Quick Capture attribute that we had adored on last year’s phone. Also retained is the Moto Assist functionality which intelligently knows if you’re driving, sleeping or in a meeting, and adjusts your profiles accordingly. What’s impressive is that in Driving mode, you can place or answer calls, send messages, have received messages read out loud for you and more, without touching your device even once. Lastly, the new Moto X has received an ability to launch and control WhatsApp, Facebook and YouTube via voice. This is a pretty neat addition, and we’d love to see other applications being added to the list in the future.

We encountered a major issue with the camera of this phone – focusing. Yes, the 13MP unit on the second-generation Moto X finally gives it the image-quality that the 10MP sensor on last year’s model could not, but its clunky focusing is an issue that cannot be ignored. It is made worse by Motorola’s insistence of minimal UI in the Camera app. Whereas on some other phones you can tap on areas you want the focus to be directed at, this device’s manual focus control is accompanied by an annoying exposure control setting, which makes it a hard task to get things right. We’d hence recommend downloading the Google Camera app for all those who’re fed up of this problem. 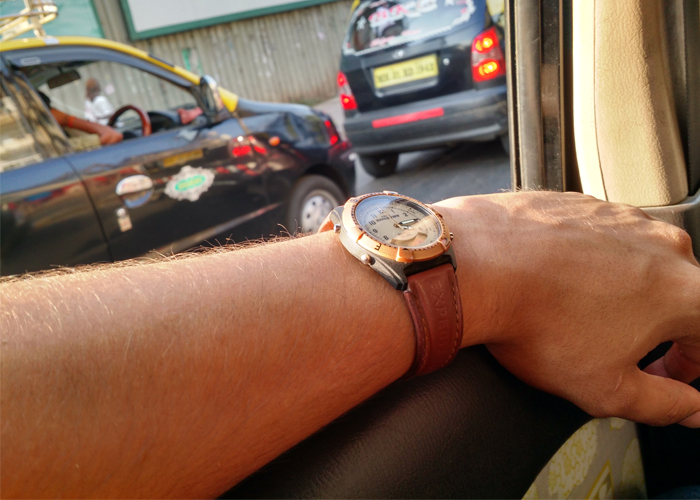 When it comes to photographs in particular, it really excels in its results. Crisp and detailed images are at your disposal through this shooter. There’s a ring flash present on the new Motorola Moto X (2014) which breaks conventions with an aim of delivering softer bursts of light to not spoil your images with harsh shadows. The company gets full marks for innovation here, as not only do the shadows actually get reduced, but it also spreads light evenly on the subjects. Videos can be shot in 1080p, 1080p SlowMo and Ultra HD (4K) modes, with the latter one being a welcome addition. These clips come out brilliantly thanks to some evident exposure optimizations. 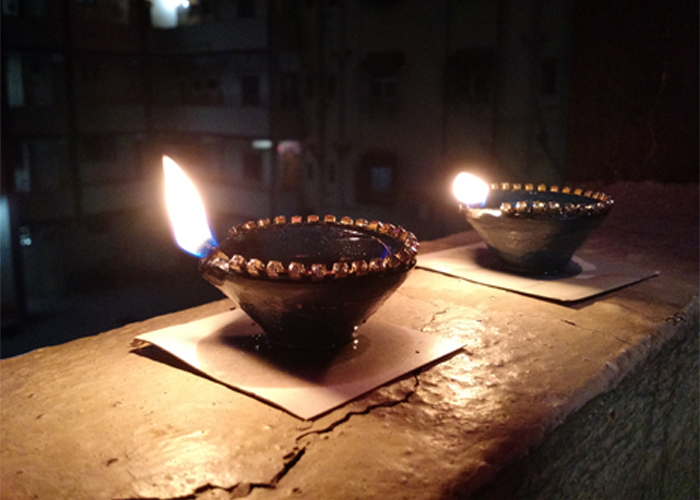 While last year’s X was humble in its internal offerings (a dual core processor with some additional cores for contextual tasks), this year’s model has gone straight to the top of the tier and chosen the Snapdragon 801 chipset as its ticker. So there shouldn’t be any hesitation to compare it against the Galaxy S5, the HTC One M8 or the LG G3 for that matter. AnTuTu gave the device 44356 points in our test, which beats the scores of both the Galaxy S5 and the HTC One M8. On Quadrant Standard Edition too, quite a respectable score of 21455 was achieved. Gaming enthusiasts will be pleased to know that this phone did well of 3DMark as well, with its score of 19031 (more than that of the S5).

Benchmark results aside, using the Moto X is an absolutely fluid experience. The phone almost never drops frames, and responds with vigor to every task you demand from it. This top-drawer performance extends even to the most demanding of games which was evident to us through our swift playthroughs of XCOM: Enemy Unknown. Regarding the battery, we’ll be honest here; you’ll only just manage to scrape through a full day’s use on this device if you use it unsparingly. Yes, we have experienced that a day of normal use tires it out enough to make you cut down on your usage towards the end of the day. Our typical daily usage involved around half an hour of calls (between intervals), lots of WhatsApp chats, a few jumps into Monument Valley or XCOM: Enemy Unknown and some amount of browsing on Reddit Sync as well as the Chrome browser. With such a usage, we used to manage to get a 24-hour battery performance but not without lowering the brightness and avoiding the games towards the end of the day. This shouldn’t be a deal breaker for many, but for those religiously seeking great battery performance on their smartphones, there are indeed better options available in the market right now. 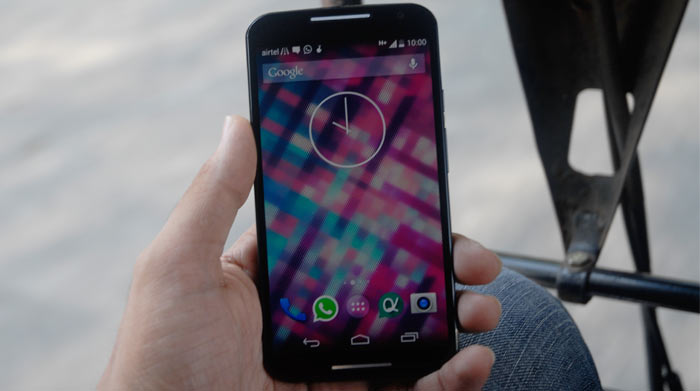 Almost stock Android experience is garnished with some actually useful software traits, just like its predecessor.

Remarkable performance even under the most taxing of situations.

Battery life is a tad towards the unimpressive side.

If compared against its predecessor, the Motorola Moto X (2014) is true winner, because its makers have analyzed and improved upon almost every aspect of last year’s model. Its vanilla user interface and its various unique software features combine to provide an overall satisfying experience that’s blighted a little by its unimpressive battery life. But for a price of Rs 31999 or Rs 33999 (leather or wood back) this Flipkart-exclusive device really does deliver a serious bang for buck. Our score for it is a good 3.8 out of 5.