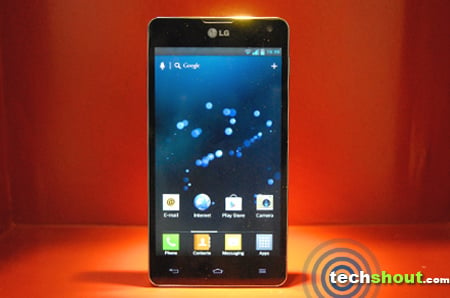 The LG Optimus G is a biggie for the company as far as its operations in India are concerned and we’re putting it through its paces in this review, so you can have a fair idea of whether or not to drop your hard-earned dough for it. With a quad core processor at its heart and a host of advanced specifications and technologies for us to dive into, it is a smartphone with immense power at its disposal. What remains to be seen however, is how it holds up against its contemporaries. Read on further as we give you a detailed breakdown of all its aspects.

On paper, this handset does radiate a lot of exuberance with its 4.7-inch IPS+ screen and its 13MP primary camera which has become a standard addition for high-end devices these days. Its display offers a WXGA resolution of 1280 x 768 pixels; something that might be unacceptable for those observing the rapid evolution towards full HD. A front-facing shooter has been thrown into the mix as well, with its 1.3MP sensor serving as a decent companion for video calling as well as HD video recording if need be. The 4.1 version of Android Jelly Bean has been infused into the smartphone and has of course, been garnished with the latest version of the company’s user interface which renders before you a plethora of ways to personalize your experience. 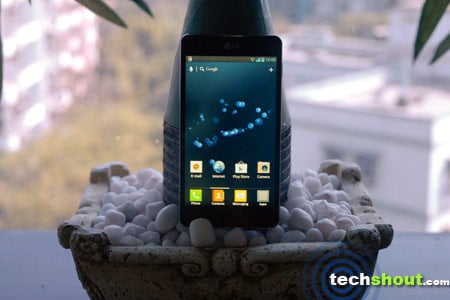 Handling the load of its operations is a quad core monster clocked at 1.5GHz. This Qualcomm Krait processor is accompanied by 2GB RAM and Adreno 320 graphics as well. Furthermore, there’s a 2100mAh Li-Po battery providing the juice for the Optimus G. Although it comes instilled with 32GB worth of internal memory, it is able to render just about 25GB for actual usage. And you’ll have to make do with that much as there’s no provision for any sort of an expansion, as opposed to some North American models of the same device which do offer microSD slots. Like we said, the smartphone’s hardware components are a solid deal at the price it’s selling at. The large screen and the advanced processor are quick to grab one’s attention at first glance, and we’ll be seeing how both perform in the latter part of the review. 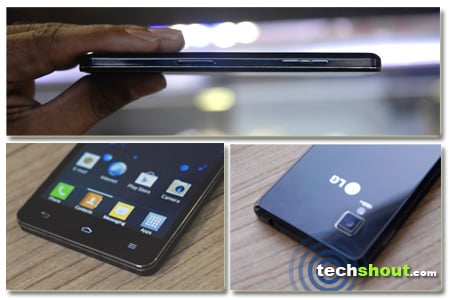 The first time we held this handset in our palms, we knew we were holding something premium. The exotic feel is given to it collectively by its unibody design, its slim profile and its minimalistic bezel. A lot of the credit for this look goes to the company’s Zerogap Touch feature which basically integrates the capacitive touchscreen with the phone’s display to deliver a slimmer surface. And though it feels quite nifty to hold, the device does not exude the looks to match this trait. It adopts the basic candy bar form factor with slightly rounded edges and no physical buttons on the front. Sitting atop the LG branding is its beautifully etched out receiver, while exactly to its right is a 1.3MP camera and a notification LED. The Back, Home and Menu capacitive keys rest at the screen’s bottom, and are invisible when not backlit. 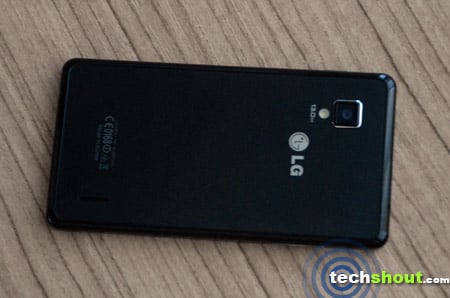 Nothing out of the ordinary lies on the phone’s chrome-lined side surface, with standard additions like the volume rocker, a 3.5mm jack, the power key, a micro SIM slot and a USB port occupying their spots. The rear surface of the Optimus G seems to have taken a leaf from the Nexus 4, with its sparkling dots. The speaker, a slightly protruding camera and an LED flash stand grounded on the device’s flip side. What matters is, despite so much being crammed into it, it doesn’t for once feel like a load to hold. The 145 grams of weight it acquires is something which feels extremely balanced once you hold it in your palms. Its unibody design acts in its favor as well, in terms of the overall feel.

One expects a device of this caliber to present its visuals with sparkling quality. This phone does just that. Its 4.7-inch screen grants a resolution of 1280 x 768 pixels, resulting in a truly radiant experience. And it’s the True HD IPS+ technology that helps it achieve this feat. Now the company claims that this addition helps the device deliver 1.6 times clearer visuals than Super AMOLED-equipped gadgets. Honestly though, nothing of that sort was experienced by us. The viewing angles are sharp, although they’re more or less similar to those of the Samsung Galaxy S3 which we compared it to. 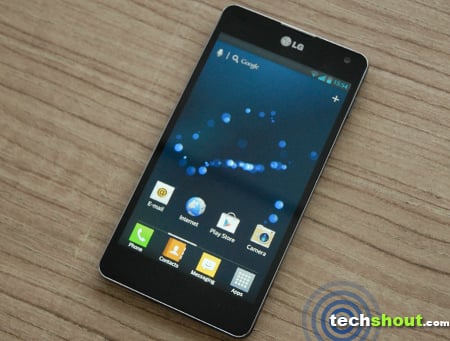 And as far as the capacitive touchscreen is concerned, we didn’t encounter any issues apart from one trivial one. While connected to a supported charger of any other company’s products, the screen becomes utterly unresponsive. But such an issue never arose when it was being charged with its own charger. Anyway, all throughout the time we got to spend with this device, its smooth and responsive nature was highly apparent, making it fit for gaming as well as the usual tasks. The surface is a bit reflective in sunlight though. 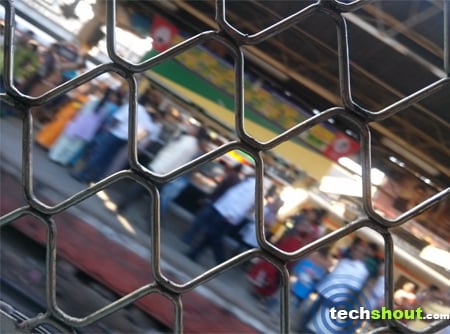 A 13MP sensor is something that’s become customary these days. So, there’s no real surprise in the fact that this phone comes with one pinned to its rear side. A plethora of features find their way into this tool, which too is routine for smartphones belonging to the price range this one hails from. Apart from the usual ones, there’s Cheese Shutter which lets you click pictures by uttering pre-defined words like cheese, whisky, kimchi and more. You would also find the Time Catch Shutter which is basically a burst mode allowing you to select the best shot from a set of five. 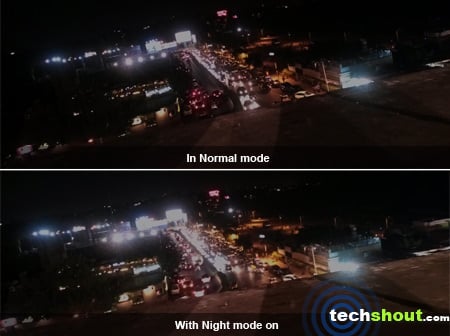 In terms of camera quality, the phone brings forth extraordinary crispness to its photographs and videos. This can be judged from the sample images we’ve embedded here. Surely, the sharpness speaks volumes about what a superb snapper this baby is. Even in low-light, it doesn’t quite lose it sheen, delivering astoundingly less amount of noise, be the picture clicked in normal mode or Night mode. The camera is one department in which this phone grabs an undisputed podium finish. As for the front-facing shooter, it is at its decent best during video calls as well as 720p video recordings, so there are no complaints there as well.

Fast is one adjective that cannot be ignored while talking about the Optimus G. The Android OS has come a long way, and yet, it is only these days that we’re seeing devices letting go of those annoying mini lags. For this phone, its 1.5GHz quad core Qualcomm Krait chipset does this job. There’s major delight in handling the interface, for you know that it isn’t going to make you wait for long to get what you wish to see. And the Adreno 320 chip only adds to the brilliance with its graphical performance.

To give you a few numbers to crunch, we ran the device through some tests. AuTuTu Benchmark gave it a humble score of 17,735, and its comparison with other devices can be seen in the image below. On GLBenchmark’s 2.5 Egypt HD test, a result of 32fps was achieved, while on SunSpider 0.9.1, 1862.7ms was gained by the smartphone. This score exceeds that of the HTC Butterfly we reviewed recently by 438ms. This goes on to prove that those looking for a handset to handle the heaviest of tasks with ease can indeed go for this phone with eyes wide shut. 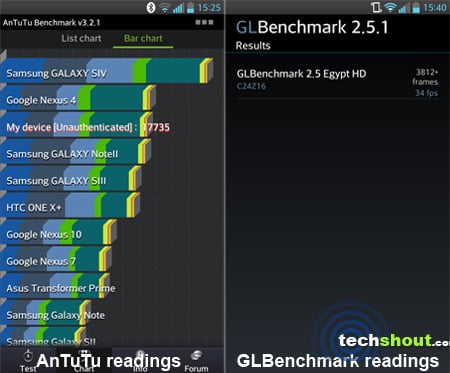 Android 4.1 is the core software on this device, whereas a layer of the company’s own UI has been granted to it. Fraught with customization options, this interface comes across as quite a flexible one. It is smooth, yes, but styling isn’t something the maker seems to have paid much heed to. Familiar effects, icons and other aspects fail to lend the novelty it deserves.

Competing with Samsung’s Smart Screen and Multi Window are the Wise Screen and QSlide features of this phone. Wise Screen keeps the display backlight on for as long as you are looking at it, while QSlide allows you to run two select apps at a time in window form, while also letting you control other functions. You can at the same time, even adjust the transparency of those windows, thus enjoying some true-blooded multi-tasking. Other than that, there are other exclusive features as well, like an enhanced QuickMemo option for taking down notes easily, SmartShare for allowing wireless sharing with big screens and more. 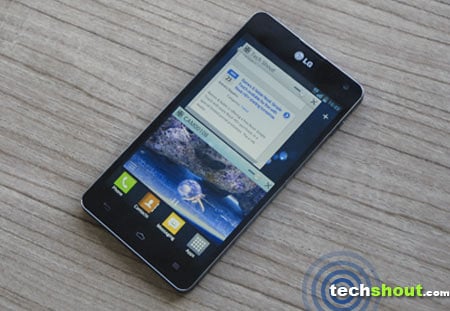 Super fast operations no matter what you’re trying to run on it.

Sort of a dull interface.

The LG Optimus G should definitely figure in your list if you’re looking for commendable performance at a price of around $550, or Rs. 30,000 in India. This ultra-fast smartphone doesn’t compromise on battery life either, as it lasts a good deal between full charges. Our unit ran for almost 22 hours of asynchronous usage while we employed it for tasks like photography, messaging, surfing, gaming and some calling as well. At the price for which it is being sold right now, this device is a superb option, especially for its lightning fast processing speeds. We’re going with 9 out of 10 for this one.