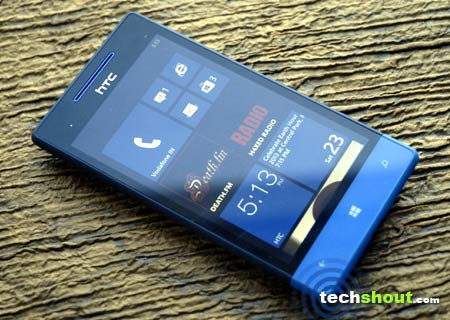 The HTC 8S we’ve picked up to review is the second addition to the company’s Windows Phone 8 portfolio. While Nokia has the upper hand in the game, other manufacturers haven’t backed off. And the Taiwanese maker seems to have gone all out with its latest offerings. The smartphone in question caters to the entry-level segment much like the Lumia 620, but the Finnish manufacturer isn’t the type to go easy on the competition. As a result, the device will be facing tough rivalry from not just one, but a total of 3 handsets (including the 520 and 720) that offer similar or even better features at a lower or comparable price range. What we’re looking forward to seeing is whether the handset has a chance of survival in the Windows Phone 8 ecosystem.

Where the design is concerned, the manufacturer has gone with none other than a unibody form factor for the 8S. The very same approach has been adopted for the current flagship and what’s pleasing to know is that this piece of hardware has received similar features as found on its larger sibling. For starters, they both flaunt a comparable appearance. The rear is constructed from polycarbonate with a soft touch paint finish layered over it, and is given the same design language where the edges are curved inward. However, this one has a removable panel located on the lower-half for housing the microSIM and the microSD card. We last saw a similar approach like this on the company’s Windows Phone 7-touting Radar device. The handset basically has a 2-tone finish and you can choose between various eye-catching colors such as domino, fiesta red, high-rise gray and Atlantic blue.

The unit we received was drenched in the last hue on the list. The majority of the flip side flaunts a dark purple tone, while the removable cover on the lower-back is sprayed with blue that also spreads over the capacitive buttons on the front, the area below the display and the bezel surrounding the earpiece as well as the rear camera. The touchscreen is coated with a scratch-resistant Corning Gorilla Glass layer and there’s a tiny notification light placed within the ear piece cutout. Slim as it may look, the phone is 10.28mm thick, but carries only 113 grams of weight including the battery. It also proffers a minimalistic appearance with the volume controls as well as the dedicated camera button on the right and the headphone jack as well as the power button on the top, while the microUSB port sits on the lower edge. The camera with its LED flash and the loudspeaker can be found on the rear accompanied by the company’s logo which made from metal, is engraved at the center. 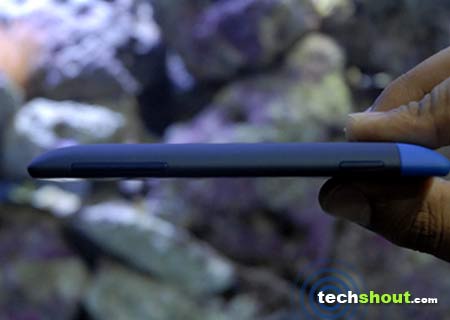 Powering up the 8S is a Qualcomm Snapdragon S4 processor that has dual cores, each operating at a clock speed of 1GHz. You’ll also be treated to 512MB of RAM which is apparently sufficient enough to get the OS functioning smoothly. Even with low-end specifications, we noticed no hiccups while navigating through devices powered by WP 7.5. Well, we wish we could say the same about the latest edition. There were times when we came across a little lag during app transitions and wile inserting text (mostly delays of a second or two). On the bright side, the overall experience which includes navigating though the interface and carrying out daily tasks isn’t much different in comparison to carrying out the same on the high-end 8X. But if you were to resort to benchmarks, it’s clearly visible how dissimilar both smartphones are.

Take a look at the scores and judge for yourself – SunSpider 0.9.1 came up at 1587.2ms, which isn’t all that impressive, but stacks up well against the 1221.6ms derived by the quad core Note 10.1 tablet and the 1862.7ms scored by the Optimus G. WP Bench Free gave it 177.41, while AnTuTu Benchmark rendered 7152 points. Compared to the 231.96 and 12249, respective scores obtained by the current WP8 flagship, the cost-friendly option isn’t far behind, but the lower end hardware does take a toll in certain aspects. The WP8 platform has an app ecosystem with plenty of room for more offerings, meaning you will feel the strain of the lack of choice when the insufficient RAM renders several titles unsupported on the smartphone. 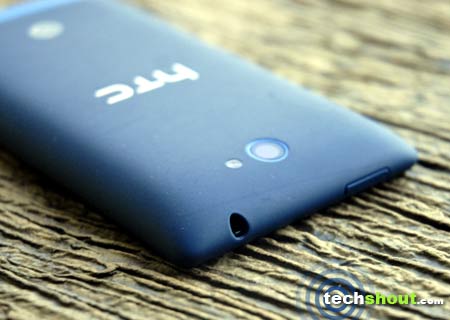 Other devices having similar entry-range specifications are likely to endure the same limitation. But wait, there’s more – Out of 4GB of internal storage, only 1.55GB is accessible for applications. This reminds us of the old Android days when applications couldn’t be moved to the SD card. What’s really annoying is that we quickly ran out of memory and couldn’t download more content from the store. External storage is mainly for hoarding multimedia files like music, videos and images. On the other side, it’s not like we could try out various high definition games from the Windows Store anyway. 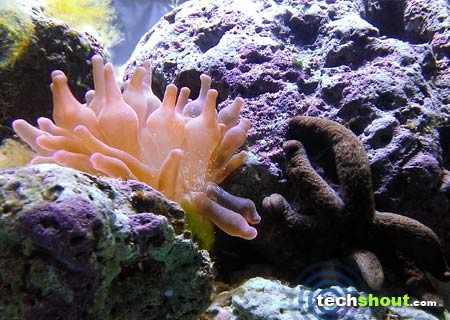 The 8S houses a 5MP AF snapper that possesses an f2.8 aperture and a 35mm lens. The camera UI implemented here is basically the same interface you’ll find on most WP8 devices. So yes, there are no enhanced features onboard, but you can always resort to third party lenses. In bright areas having ample amounts of light, the images produced are beautiful, vivid and rich in detail. However, if you’ve got a shaky hand, be sure to expect blurry renders in moderately-lit conditions without the use of flash. Videos recorded in 720p HD appear fine on the smartphone’s display and the results are pretty much decent when it comes to viewing captured clips on an external screen as well. Albeit levels of detail aren’t much, the color reproduction is good. Now, only if we had stabilization to reduce shakes, images and footage would be all the more enjoyable. 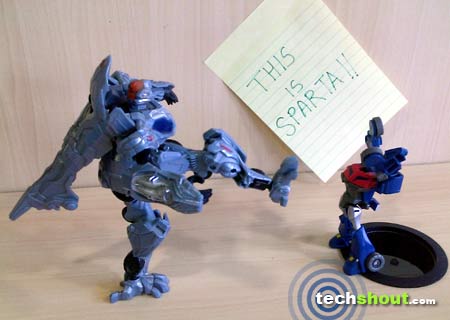 We’ve already gone into detail about the WP8 platform before. So we’re going to quickly brush you through the key features. The OS basically brings in new levels of customization which include multiple size support for Live Tiles. And Microsoft has introduced compatibility for HD screens as well as the much anticipated multi-core processors. However, the 4-inch S-LCD display implemented here has a WVGA resolution. Single-hand use is the prime highlight of the display and the viewing angles are pretty decent.

The Taiwanese company hasn’t provided any official estimate for how long the 1700mAh Li-polymer batter can run on a single charge. The rundown time derived through WP Bench Free is approximately 3 hours and 15 minutes. In our real-life test, we managed to pull through an entire day with moderate usage and around 20% of charge left to spare. This includes around 2 hours of browsing over Wi-Fi, an hour and half of streaming video and a few hours of music playback with a little gaming, while the phone was idle for the remaining time. 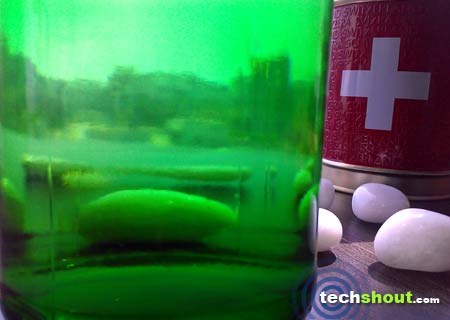 A flagship design and experience delivered through an entry-level smartphone – It was about time this happened.

The phone packs in a 5MP camera that can click beautiful pictures and shoot decent HD videos.

Until and unless Microsoft’s mobile platform supports installing applications on an SD card, 4GB of internal storage just isn’t satisfactory.

There’s no front-facing camera and this could pose as a letdown considering the retail tag affixed to the smartphone.

The HTC 8S to us is what the Galaxy S3 mini is to the original S3 – a budget-friendly alternative that delivers the same impressive design language without much compromise on specifications. Unlike Android where companies incorporate their own UI and UX as well as rich features, the WP platform is basically the same on all devices. It’s the design and the bold new colors that draw people in to buy handsets powered by Microsoft’s mobile OS, so implies Larry Meadows, Managing Editor of Social Media at HTC.

Well, it looks like the company has done a fabulous job here. But then again, Nokia is giving its all into delivering attractive form factors and attributes like wireless charging, not to mention slightly better specifications and low price points. We’re certain that the Taiwanese manufacturer is in for one tough ride. We’re ending this review with an 8 out of 10 rating for the handset which is currently retailing in India for around Rs. 18,900.