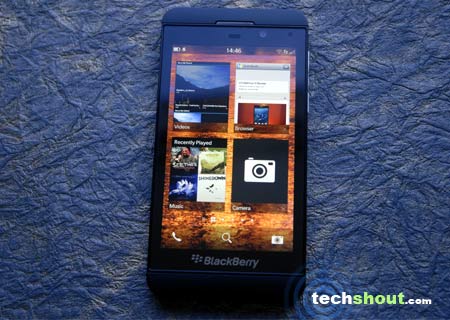 We’ve invited the BlackBerry Z10 over for a review, which is the first re-designed, re-invented and re-engineered smartphone from the Canadian company’s 2013 lineup. Apart from a new design approach, the manufacturer has also decided to drop the RIM moniker and it now operates under the same identity as its brand. BB10 is the name given to the fresh platform and the giant hopes that its latest initiative will help recover lost ground in the smartphone race. So can the new entrant reign supreme over well-established ecosystems that have been around for years? That’s what we’re longing to know and by the time we’re done with this review, you can expect a fairly good idea as to where the latest OS and handset stand amongst its peers. 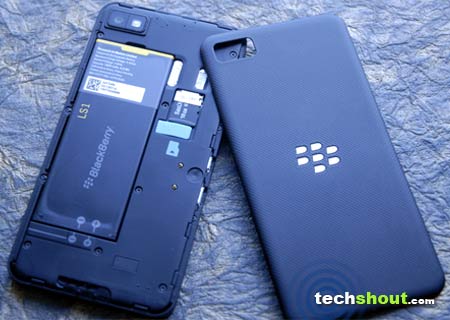 We first got a glimpse of what the company had in store when the Dev Alpha prototype was introduced. Well, a lot has changed since then, structurally and software-wise. The new addition not only has a more stylish appearance, but is slightly higher in specifications. Below the 2MP fixed focus camera on the front rests the display which measures 4.2 inches wide, proffering a resolution of 1280 x 768 pixels and a 356ppi density. Layered over it is a protective glass which isn’t the usual Gorilla coating from Corning. It turns out that the company has adopted the touch-on-lens technology for the screen which is quite similar to the Xperia V’s sensor-on-lens approach.

What this attribute does is it eliminates the need of a sensor layer. So that’s one sheet less in the design, resulting in a slimmer form factor. On the downside, if the lens film gets shattered, the touchscreen might lose responsiveness. What the maker has left out is an oleophobic coating. The display is hot for smudges and it doesn’t know how to let go either. Even after a few wipes across the screen with a microfiber cloth, it’s still not a pretty sight. Alluring as the design may look, the exterior appears to have been dressed with excessive clutter. 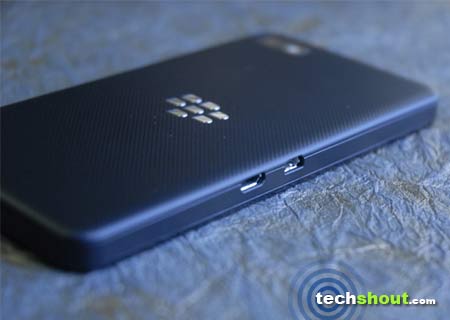 Firstly, there’s a thick bezel surrounding the screen and the top as well as bottom extensions portray a stylish appearance, but make the phone look unnecessarily large. The handset reminds us a lot of the iPhone 5. That’s probably because of its smooth edges and curved sides. If there’s anything in the design that impressed us, it’s definitely the removable back panel. The polycarbonate cover features a soft touch mesh-textured finish and is highly flexible. Engraved at the center is the BB logo with a chrome finish, above which you’ll find a cutout for the camera and LED flash.

On the flip side of the panel you’ll be presented with 2 contact plates which are for the integrated NFC antenna. And on the handset’s rear, there’s a housing for a rather long Li-ion battery that has an 1800mAh capacity, in addition to a microSIM slot and a microSD card port. The loudspeaker is on the lower-end and there are aluminum-made hardware buttons. They include the volume controls on the right and the power button on the top that’s accompanied by a 3.5mm audio jack. Aligned to the left are the microUSB and microHDMI ports. In terms of dimensions, the device measures 130mm x 65.6mm x 9mm and it weighs a good 135 grams. 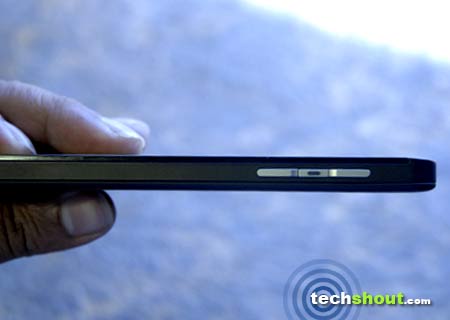 Unlike most reviews where we conduct various benchmark tests to determine performance and compare it with other devices, the BB10 platform is awaiting the release of such utilities. However, by taking the hardware into consideration and comparing it with other gadgets carrying similar specifications, we could determine the potential hidden within the Z10. By the look of things, the handset carries almost the same specs as the LTE-equipped Galaxy S3.

From a single core Qualcomm Snapdragon processor which was implemented in previous generation models, the latest device packs in a dual core SOC which is based on the Krait architecture, instead. The CPU here is clocked at 1.5GHz which is the same as the chip inside the HTC 8X, and is accompanied by 2GB of RAM. These specifications are enough to get things moving at a speedy pace, but compared to todays standards, the handset would be positioned as a mid-tier contender. 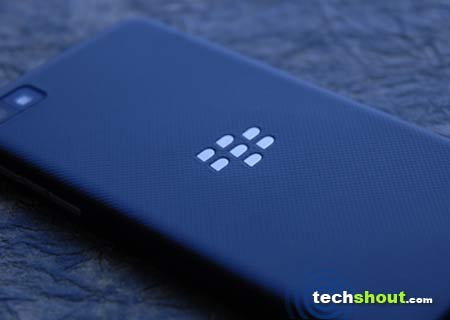 In browser performance, the BB10 OS comes up top on HTML5test, scoring 485 points. Chrome 25 comes in at second carrying a score of 417 followed by Opera Mobile 12.10 at 406. In SunSpider 0.9.1 JavaScript Benchmark, the phone managed to acquire 1587.5ms. The default web application however, doesn’t fare quite well when it comes to streaming smartphone-friendly MP4 files in various instances. The Z10 is hot, we mean seriously hot – So much that we had to get a replacement unit due to excessive overheating. With only a few minutes of gameplay, the phone’s temperature rose drastically and holding it wasn’t a comfortable feel. And to our luck, the substitution was running a fever too, but not as bad as the first unit.

Our initial battery tests derived over 5 hours of heavy usage. Well, that was before the BB10 10.0.10.82 update popped up bringing improvements to the activity life. After downloading the latest firmware and charging the device once again, we conducted a second analysis. The result was a little less than 6 hours of serious usage which includes browsing over Wi-Fi for 2 hours, continuous music playback (streaming) and approximately an hour and a half of alien-slaying in N.O.V.A. 3. You can expect the Z10 to last an entire day on moderate consumption. 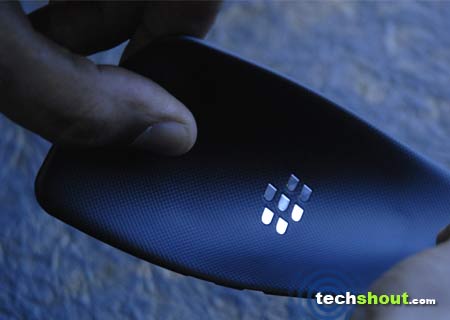 Launching the camera from the lockscreen is bit of a hassle as you have to wait for an animation to complete, then for the app to load – It’s not quite an apt method when you need to snap up moments as they happen. On the bright side, we did notice that getting into the camera app by unlocking the screen and then hitting the icon in the main UI is much faster, that’s if mere seconds matter to you. The companion tool isn’t high on features, but it does have the basic options that are mandatory.

For lenses, effects, HDR and Panorama, you’d have to resort to third-party apps from the store, if there are any. What you do get are pre-loaded shooting modes like action, night, beach/snow and white board as well as stabilization and burst capture options. Let’s talk about quality now – Images and video produced from the 8MP snapper provided a good amount of detail, but fell short on reproducing colors, leaving us with slightly dull pictures and clips. 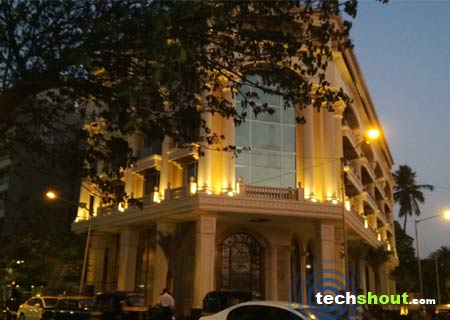 Hardware isn’t much without the appropriate software in the driver’s seat. And the company has employed the BB10 platform to steer its way down the long and winding road with a lot of catching up to do. For starters, the OS is definitely no threat to Android or iOS, but it could stack well as a competitor to Microsoft’s Windows Phone. If you’ve used Google’s and Apple’s mobile platforms before, the BB10 UI is somewhat similar to the interfaces on both OS’. On the top of the phone’s display, you’ll find the status bar displaying the signal strength and other indicators, which also can be dragged down to reveal quick setting options. On the lower part of the interface, the company has placed 3 non-changeable keys, namely call, search and camera. Browsing through the environment is fairly easy. The Hub is located on the left and applications to the right.

For those who aren’t aware, the former displays all notifications in a list format which can be refined based on account and type by further swiping to the left. As you already know, there are neither any physical navigation buttons on the phone, nor in the UI. So carrying out certain functions is completely dependent on gesture swipes. Launching any application will render it in a full screen layout. Here, you can either swipe up from the bottom frame and hold the position to get a quick peek at notifications and alerts or leave the app to minimize it. The OS basically freezes the tool and makes it quickly accessible from the Active frames page. 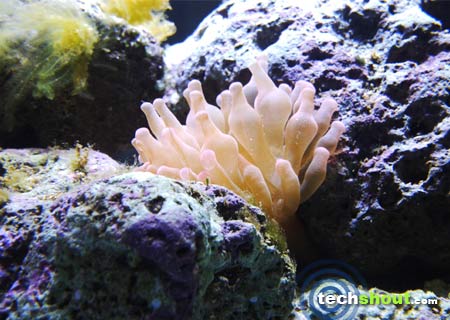 Where customization is concerned, there isn’t much you can do to alter the UI’s appearance to your liking. What the platform does permit is the ability to rearrange icons into different screens and in folders. Additionally, you’ll be able to set a personal message for the lockscreen and even change the wallpaper which will be displayed throughout the interface. Carrying out a few tasks tend to be time consuming. For instance, to shut down the phone, you’ll need to keep the power button pressed for 3 seconds, or until the timer hits zero.

Other drawbacks we came across include the inability to launch notifications from the lockscreen and the on-screen volume controls should have been transparent. If you change the levels during video playback, it occupies a lot of the display which isn’t quite efficient during video playback. Well, there were fun times as well. One attribute that we’ve gotten quite fond of is that you won’t need to press the power button to unlock the phone. A simple upward swipe on the screen while the display is off provides access to the device. BlackBerry has also introduced a do not disturb mode dubbed Bedside which silences all notifications, like in Apple’s iOS platform. It can be activated through a drop-down menu from the lockscreen.

The tiny button in between the volume keys not only acts as a play/pause button, but on long pressing it, the key also brings up a Siri-like voice assistant which can send texts, emails and BBM message as well as call someone. It’s even capable of searching the web, creating an appointment or a note and setting a reminder. The keyboard is our most favorite feature in the Z10, not only does it beat the stock Android and iOS ones, but also doesn’t make us miss the existence of the company’s conventional QWERTY keypad offering. 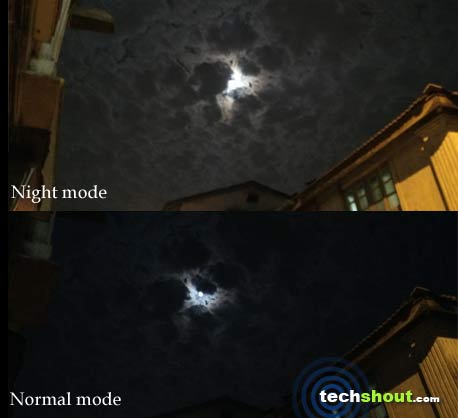 The BB10 platform comes with a unique set of features such as the Hub, Time Catch, BBM Video, BES 10 and a lot more with a full touch UI and a full screen experience.

The BB10 OS has a lot of issues like apps freezing up and randomly closing. Much needs to be fixed and refined to deliver an optimal user experience.

No one likes handling a phone that cannot keep its cool.

The battery life doesn’t deliver as to what we anticipated. Pre-built management tools should help enhance activity time.

We’ve seen quite a lot of potential in the latest OS and clearly, it’s a make or break situation for the company. There’s a lot to love and dislike in the platform as well as the BlackBerry Z10. Well, the former is still the first batch and there are a lot of tweaks and fixes required for it to match up to today’s standards. We’re hoping that most of the bugs and glitches we encountered get fixed in BB 10.1.

So this brings us to the question – Are there any takers? This would be heaven for BB fans, but if you’re coming from the likes of Android or iOS, we doubt that you’d be much pleased with the OS. An 8.3 out of 10 rating is what we’re leaving the smartphone with. For an unlocked price of around $600 in the US and below Rs. 45,000 in India, the handset is retailing for almost the same amount as the SIM-free iPhone 5.