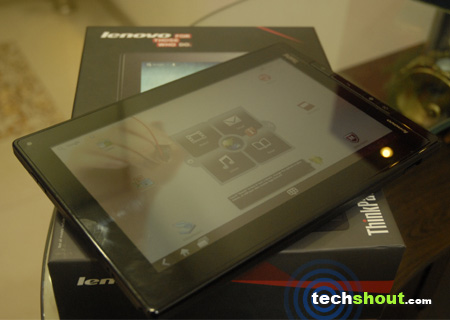 The Lenovo ThinkPad Tablet recently dropped by our HQ and we’re about to go hands-on for a full scale review. This 10.1-inch slab looks like it’s built for business. And the Beijing-based manufacturer doesn’t seem to be kidding around. ‘The business tablet that can do it all,’ as they’re describing it, is filed under the company’s professional-grade section. To honor such claims, the device in question comes with a good offering of specs and an accomplice to enhance productivity while on the move. If you haven’t guessed by now, we’re referring to the Keyboard Folio Case add-on which we received bundled with the slate. 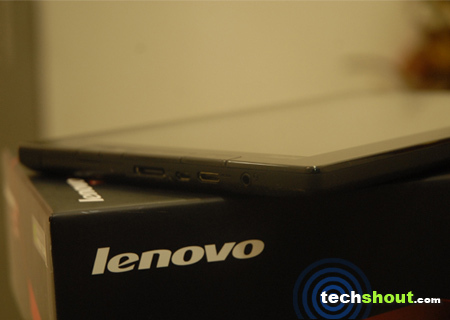 At 14mm thin, the tablet flaunts the traditional design most slates encompass. It may not have the looks to drool over, but the hardware could be able to make up for the loss. Drenched in black, we received the device in a neat package, accompanied by a pair of earphones, a micro-USB cable, an AC adapter, a stylus pen and various other goodies including the Keyboard Folio Case add-on. Based on our design ideology, nothing shouts out a more professional look than a gadget coated with an aluminum casing and a brushed finish. But in this case, the dark glossy shade should do pretty well too. The rear has somewhat of a rubberized feel to it and it provides a decent grip. And although the device is on the bulky side, it’s not all that heavy and you most probably won’t have a problem carrying it around. Well, at least we wouldn’t. 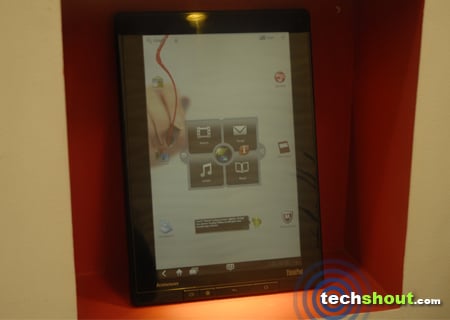 We took a quick whirl around the 260.4mm x 181.7mm x 14mm Lenovo ThinkPad Tablet to uncover the components it tags along. On the left, you’ll find a full-sized USB 2.0 port and a stereo speaker, while the right plays house to the power button. And besides the volume controls that are allocated to the top, all the I/O ports are situated at the bottom. First in line is the dock connector which is closely followed by a micro-USB jack, a mini-HDMI output, a 3.5mm headphone jack and a full-size SD cum 3-in-1 media card reader as well as a SIM card slot, enclosed within a separate compartment. Embedded onto its rear is a 5MP camera, while the front boasts of a 2MP snapper alongside the 10.1-inch IPS touch panel. Just above these is an assortment of physical buttons such as a display auto rotate on/off toggle switch, a quick access key for the web browser, a back button and the home key. The Wi-Fi only variant weighs just about 715 grams, while the Wi-Fi and 3G version comes with a total mass of around 730 grams. 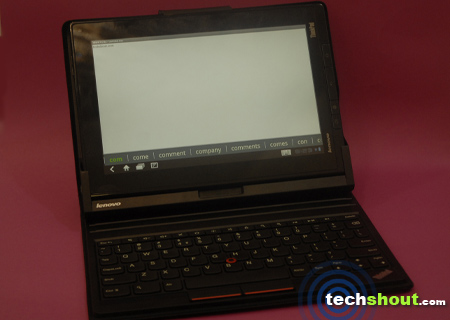 Being business-oriented, the manufacturer has fitted the tablet with some pretty good specifications. When the need for processing power arises, the dual core Tegra 2 SOC is first that comes to mind. And it didn’t surprise us to know that the device in question employs the very same Nvidia CPU along with 1GB of RAM. Well, Lenovo seems to have the performance side nicely covered. For visual experiences, there’s a WXGA multi-touch LCD screen with the IPS technology that proffers resolutions of 1280 x 800 pixels, 178-degree wide viewing angle and support for the ThinkPad Tablet Pen input. And for enhanced durability, the display sports none other than the Corning Gorilla Glass protective coating. 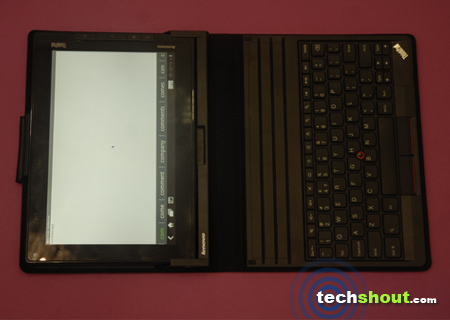 The unit sent over to us for a review incorporates 32GB of built-in flash storage, while 16GB and 64GB options are also available. And like most tablets, the external SD card bay serves the purposes of accessing and transferring files only and not as a means for memory expansion. Then there are the usual components such as the accelerometer, gyroscope, A-GPS and ambient light sensor. With Wi-Fi and 3G capabilities for going online, the tablet is touted to deliver approximately 8 hours of activity through the 24.1W 3,250mAh Li-polymer battery. 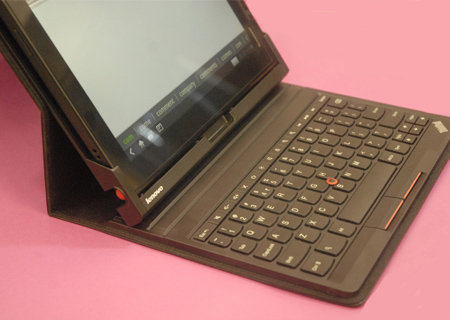 To put the device to the test, we ran it through a few benchmark tools. The AnTuTu application derived a score of 5110. Based on rankings, the Lenovo ThinkPad Tablet stands tall against the Amazon Kindle Fire, but falls under the shadows of other dual core devices such as the LG Optimus 2X (also Tegra 2 powered), the Samsung Galaxy S II and the recently launched Samsung Galaxy Nexus. As expected, Tegra 2 optimized games such as Riptide GP and Galaxy on Fire HD run smoothly without any sort of problem. The company has even thrown in a number of business-oriented applications along with the Lenovo App Shop. The stylus pen makes it easy to jot down notes and even personalize documents to a great extent, while both cameras snap up average quality pictures. The rest is pretty much the same as you would expect from the Honeycomb OS. A little over 7.5 hours of continuous video playback is what we derived. We’re expecting 1.5 hours of additional activity on normal usage and web browsing. For reminder’s sake, the ICS update is scheduled to roll out in May. 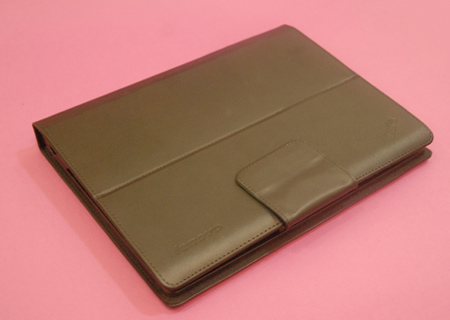 The Keyboard Folio Case is well designed. However, navigating through the tablet’s interface or the web browser for that matter, is more annoying than simple. Firstly, the trackpad or more appropriately, the mouse sensor, is placed in the middle of the keyboard. Not only is it hard to control the cursor and move it to a precise location, but it also takes quite a while getting used to. If anything had to be changed here, it would indefinitely be the mouse sensor. Instead of the small controller as well as the left- and right-click keys, a multi-touch trackpad would have played well. The keyboard is well equipped for carrying out tasks, while the case presents itself as protective cover for the tablet. By the looks of it, someone would actually think you’re carrying around a diary.

We really love the Keyboard Folio Case and the professional appearance the Lenovo ThinkPad Tablet flaunts.

It’s a good combination of a beautiful 10.1-inch screen with the least amount of compromise on performance or battery life.

For some unknown reason, we couldn’t get the tablet connected to a computer for transferring files over mass storage. And file browser applications don’t seem to recognize flash devices attached to the USB port.

The physical keys besides the one for volume and power aren’t of much use and they tend to get pressed accidentally very often, mostly while we’re operating the device in the landscape orientation.

The Lenovo ThinkPad Tablet is indeed a noteworthy pick for potential business users constantly on the move. And the combination of the stylus pen with the case makes it even more of an ideal companion. We’re happily giving it an 8.4 out of 10 rating. The device can be picked up for a starting price of $429 in the US. All in all, nicely done Lenovo, but you’ll really need to cut down on the mass next time.