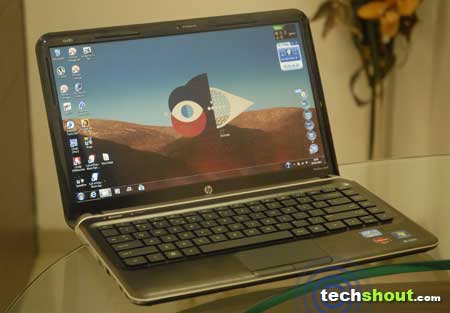 The HP Pavilion dm4-3010tx laptop from the California-based technology corporation is the latest refresh in its series, one of the many reasons why we’re putting it through a review. This piece of machinery along with its Beats Edition counterpart made their debut back in December. And based on what we know so far, the dm4 comes packed with a number of added features and high-end components essential to cater the needs of demanding users. So read on for a full analysis. 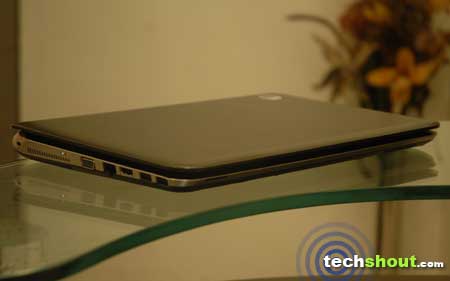 We love elegant designs and so does HP. Well, that’s clearly shown through its latest dm4 laptop. Like every other notebook, this one is crafted around a rectangular cutout, but has somewhat of a sophisticated look. Built around dimensions of 33.78 x 22.48 x 2.44 centimeters, the manufacturer has sprayed it in a Dark Umber shade that flaunts a blackish-brown glossy hue and a brushed finish which covers the top lid and the entire surface around the keyboard and trackpad. Unlike the aluminum-crafted exterior, the bezel surrounding the display is built from hard plastic and incorporates the webcam as well as WLAN antennas.

All ports and sockets equipped onto the HP Pavilion dm4-3010tx are placed on a sliver-coated frame that spreads across the front as well as side edges and the surface just above the keyboard. On the right, you’ll find the power connector followed by a USB 2.0 port, an Audio cum microphone jack and an optical drive, while the left employs a security cable slot, air vents, power and HDD LED activity indicators, a VGA port, an Rj-45 jack as well as an HDMI output and 2 USB ports with the 3.0 interface. Moving to the notebook’s front, there’s a digital media card reader and a set of Beats Audio speakers with an HP Triple Bass Reflex Subwoofer. Taking into account all aforementioned components, the dm4-3010TX weighs approximately 1.9kgs with a 6-cell battery in tow. 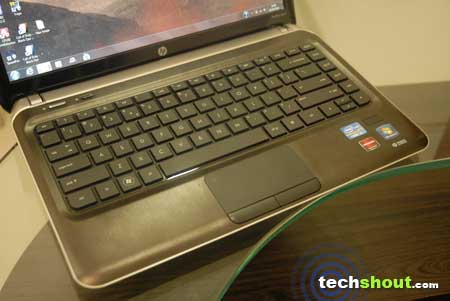 They say ‘never judge a book by its cover.’ So keeping that in mind, we’re going to have a look at what the dm4 has employed within its chassis. To begin with, the laptop sent over by HP embeds a dual core second generation Intel Core i5 2450M Sandy Bridge processor that’s based on the 32nm technology. Clocked at 2.5GHz, it’s most likely to top at a maximum frequency of 3.1GHz with help from the Turbo Boost. Accompanying the CPU is 6GB of RAM, the Intel HD Graphics 3000 and the switchable Radeon HD 7470M GPU that brings in 1024MB of GDDR5 memory. To beef things up, you can select between various processors starting from the Core i3 series to the high-end Core i7-2640M CPU, with 16GB of dual channel memory on the Intel HM67 Express Chipset.

For visual pleasures, the display panel affixed onto the HP Pavilion dm4-3010tx is an HD BrightView LED-backlit screen which stretches up to 14 inches diagonally with a 1366 x 768 pixel resolution. For hoarding needs, our review unit houses a 640GB HDD. However, the company is offering a variety of storage options including 320GB, 500GB, 750GB and 1TB drives or a 500GB 7200rpm HDD as well as a 20GB SLC mSATA SSD with the Smart Response technology. Additionally, it comes with the HP ProtectSmart which apparently locks the hard drive to prevent data loss and damage to hardware if dropped. There’s also the HP CoolSense for maintaining a stagnant temperature and avoiding overheating. Connectivity-wise, your options lie at a Wi-Fi b/g/n standards or Ethernet LAN. Powering all these components are choices of a 6-cell or 9-cell Li-ion battery. 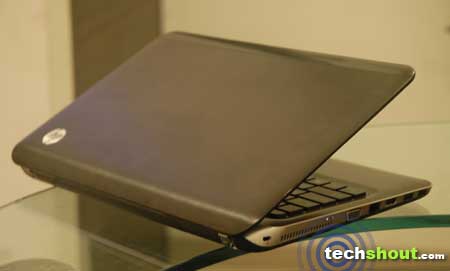 On the software front, you’ll basically be able to boot into either Windows 7 or the HP QuickWeb 3.1 OS that’s an highly customized version of the Splashtop platform. Besides HP, various other manufacturers and OEMs have their own version of the Instant On technology like the Acer Insta-boot, Dell Latitude ON and LG Smart ON. We’re sure everyone’s quite familiar with Microsoft’s offering. When it comes to the QuickWeb utility, the platform does just as its name suggests. With the simple press of a button (this one’s located just besides the power key, above the keyboard), we managed to boot up the OS in just under 20 seconds. Being simple and lightweight, it places itself as a convenient and quick way of accessing the web without the need of booting into Windows. Almost all websites worked smoothly. It even supports Adobe Flash and comes preloaded with Skype. However, the lack of multi-touch gestures for the trackpad and compatibility for media files drastically weigh it down.

The combination of an Intel Core i5 2450M Sandy Bridge processor with the Radeon HD 7470M graphics and 6GB of RAM makes no compromise on performance. From a swift boot-up time to a lagless experience, the HP Pavilion dm4-3010tx is exactly what you would expect from a multimedia rig. To put these components to the limit, we ran a few tests. Call of Duty Black Ops with all settings on high, derived an average of 30FPS to 35FPS. The lowest frames we recorded were above 25FPS during certain events, while the maximum rate went well over 40FPS that’s pretty good for a configuration of this sort. 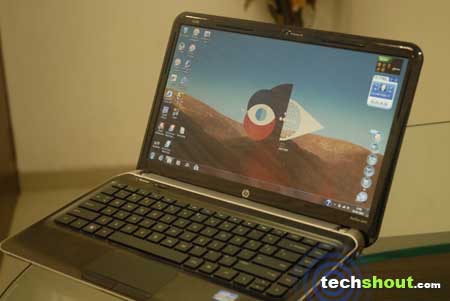 Similar to the Nvidia Optimus technology, AMD has a battery saver gimmick of its own. For software and games which have high performance needs, we could conveniently add each application into an exception list and adjust the energy consumption preference to either power saver or high performance modes, through the Catalyst control center. For entertainment buffs and audiophiles, the Beats Audio combination with the HP Triple Bass Reflex sub-woofer delivers rich audio output. And the volume levels are loud enough to fill up an entire room. The Battery Eater Pro tool provided an estimate of 55 minutes, while our video playback best rendered a little less than 2 hours of activity.

The dm4-3010TX is a brilliantly crafted laptop, and that alone places it as a noteworthy companion.

The HP QuickWeb provides a convenient and quick method of accessing the web without booting into Windows.

The touchpad affixed onto the laptop is rather small and makes navigating through websites a bit uncomfortable as well as annoying at times.

If HP can drop in a good offering of hardware components, is a backlit keyboard too much to ask for?

The QuickWeb utility could use some more features like support for media files.

The HP Pavilion dm4-3010tx comes high in customizable options and with a wide catalog of Intel processors, RAM, storage and various other components to choose from. Not only did it deliver a splendid experience, but also earn a spot amongst our favorite notebooks. Taking all these into consideration, we’re giving it an 8.7 out of 10 rating. Potential users in India can pick up this entertainment rig for around Rs. 52,000.