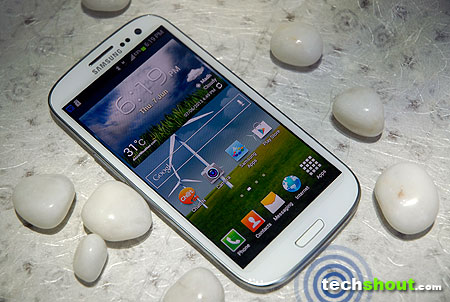 The Samsung Galaxy S3 has certainly enjoyed its fair share of speculation over the past few months and in this review, we’re going to find out whether it was worth all the hype. The device in question has earned its place amongst the first wave of quad core smartphones and it’s the first in the series to roll out with several ‘human-centric’ attributes. Moreover, it’s even touted to be capable of taking the iPhone 4S head-on. Apart from high-end components, the handset packs in an arsenal of features including S Voice, S Beam, Smart Stay and much more. So can it reign supreme in the smartphone ecosystem? We’re more than eager to find out.

‘Designed for humans and inspired by nature’ – with a statement like that, Samsung seems to have been all too enthusiastic while advertising its latest Galaxy phone. Well, that doesn’t bother us at all, considering the fine-looking device they’ve laid down. Drenched in marble white, the S3 is just about 8.6mm thick and weighs not more than 133 grams. Minimalistic is how the handset is designed to appear. For the size and weight specifications it carries, this little slugger feels pretty light in the hand. A thick silver metal bezel surrounds the edges, while the slim rear panel is crafted from polycarbonate. Not to mention the gleaming effect given out from almost every nook and corner through the glossy finish. 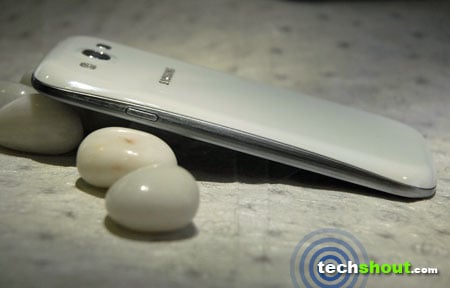 The components that persist till date are the home, back and menu buttons which sit in their usual spot, just below the display. On the top of the Samsung Galaxy S3, you’ll find a LED notification followed by the front-facing camera, a couple of sensors and the receiver. Flip over the device and you’ll be presented with the primary camera accompanied by a flash, a loudspeaker and a silver Samsung banding, which dominate the rear panel. Volume controls and the power button are placed on the sides, while the mini-USB port and 3.5mm jack are allocated to the lower and upper ends, respectively. Pop the hood to find the removable battery, the microSD expansion bay and the mini-SIM card slot. 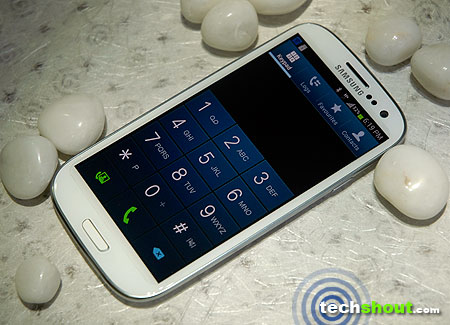 Similar to the HTC One X handset, the US-bound Samsung Galaxy S3 will also be dropping off the quad core processor to make room for 4G LTE network support. The replacement SOC for the variant lies in the hands of Qualcomm with the 1.5GHz dual core Snapdragon S4 taking charge. Well, our review unit packs in none other than the 1.4GHz Exynos 4 quad, the company’s latest chipset that’s designed around the 32nm process and based on the quad core Cortex A9 micro-architecture. To top it off, Samsung has thrown in 1GB of RAM. A gorgeous 4.8-inch HD Super AMOLED display sits pretty on the front delivering a 1280 x 720 pixel resolution for the eyes to feast on. Compared to the 4.3 inches on the S2 and 5.3 inches on the relatively large Note, the touchscreen on the S3 is generously-sized and feels like a right fit for smartphones. You could say that it’s not too large and at the same time, it isn’t small. A protective layer of Corning Gorilla Glass 2 is laid over the display for enhanced durability against the dreaded sight of scratches and cracks. 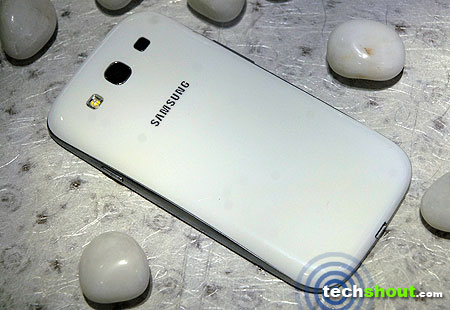 By the looks of things, the company seems to have balanced out the Galaxy S3 specifications pretty well, Kudos to that Samsung. The Android Ice Cream Sandwich OS runs the show here and the TouchWiz 4.0 UI is coated over the platform to deliver a more streamlined user experience. For photography buffs, an 8MP camera with ‘zero shutter lag,’ is fitted onto the device proffering full HD video capture, supported by attributes such as AF and flash. A 1.9MP snapper accompanies its rear-facing counterpart with recording capabilities in 720p resolution. Where memory is concerned, you’ll have options of a 16GB or a 32GB version, while a 64GB is in the pipeline. Combine the built-in storage with an external memory card and you could go up to a whopping 128GB of hoarding capacity, that’s 64GB integrated, plus a 64GB microSD card. On the connectivity front, there’s a Wi-Fi b/g/n module, GPS, NFC, Bluetooth 4.0 and HSPA+ network support with 21Mbps downlink speeds. The device even packs in the usual dose of sensors comprising of an accelerometer, RGB light, digital compass, proximity, gyro and barometer. Powering up this beast is a 2,100mAh battery. 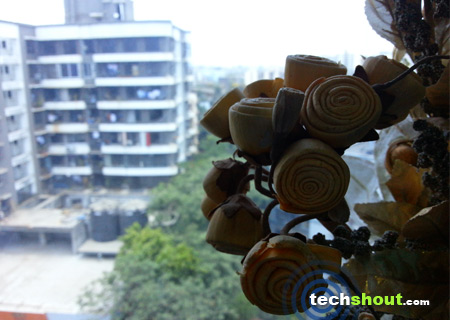 While our first impression had us going ‘Wow, look how hot the phone is,’ the real surprise came when we powered it up. A beautiful interface that’s intuitive and convenient to navigate, presents itself in a very streamlined layout. The display is nothing less than brilliant, portraying smooth HD video playback and images in bright as well as vivid colors. However, the screen doesn’t perform quite well out in the wild when dealing with harsh sunlight, even if the brightness is set to full. As advertised, the camera on the Samsung Galaxy S3 is quick and captures images in the blink of an eye. Photos snapped up appear superior in all means as compared to the HTC One V, the smartphone with the ‘best-in-class camera.’ Crisp and clear as they are, lowlight stills appear at par with what we anticipated. Video recording on the other hand, isn’t up to the mark. Set at full HD resolution, the footage we derived was a bit grainy and dull. 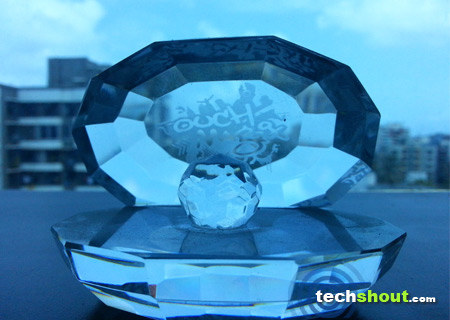 Based on the results from the AnTuTu Benchmark application, our review unit stands second just below the Transformer Prime, tipping the scale at 10069 points. However, the difference in scores between the two is minimal. We decided to put it through a few pressure tests of our own. Similar to most Android phones, the S3 also tends to suffer a virtual breakdown when under immense stress. The testing formula is pretty much simple – multiple tabs with active Bluetooth file transfer and music playback running in the background. In our case, the music app stopped responding, while all tabs in the browser closed down automatically. On the bright side, at least there wasn’t any lag. Demanding titles like Riptide GP make the most out of the S3’s quad core processor. Console-like quality graphics and smooth gameplay combined with the 4.8 HD display are quite the treat. After fiddling around and carrying out our tests, we managed to pull through approximately 6 hours of battery life on high usage. 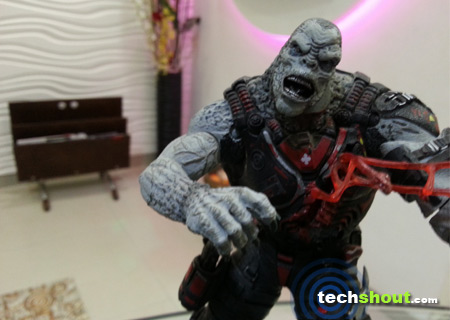 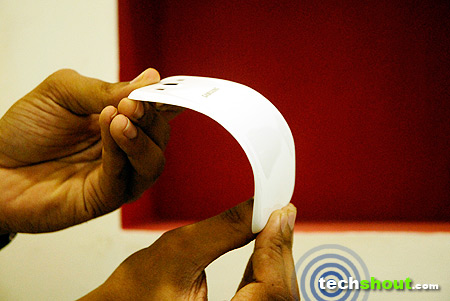 For the money you’d be shelling out, it’s good to know that the handset comes with some great features.

The smartphone is elegantly designed and sports the most gorgeous touchscreen ever.

Performance is not compromised on all the important fronts, neither is the battery life.

The Direct Call feature which allows you to respond to an open message by calling the sender, upon swinging the device to your ear, is simply splendid.

The glossy thin polycarbonate rear panel looks good, it could break easily though.

Be it dual core or quad core gadgets, the sudden lag in the Android UI still persists.

The S Voice attribute is pretty much a sales gimmick to counter the iPhone 4S’ virtual assistant Siri.

We’ve waxed eloquent on everything we need to say about the Samsung Galaxy S3. What’s left? The South Korea-based conglomerate has certainly hyped things up a bit, but it’s totally worth the smartphone it has rolled out. We’re giving this proud member of the Galaxy family an 8.9 out of 10 rating. Potential buyers in the US can pick up this ICS-powered handset for $694.99 through Expansys, while it is available in India for just about Rs. 39,000 or lower.