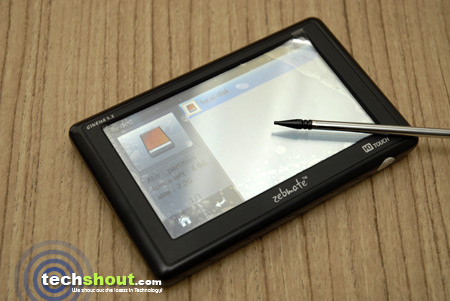 It is debatable whether touchscreens would overshadow physical buttons, owing to a fair number of loyalists on each side. However, markets across the globe have seen a drastic increase in the number of touch devices. We have seen Zebronics scoop out its offering for music bugs in India and now the company takes a plunge into the touch scenario. Employing its latest rhythmic creation with a touchscreen display, the Zebronics Cinema 4.3 Zebmate recently hopped onto Indian store shelves. As it now reaches our review desk, here we present the highs and lows of the Cinema 4.3.

The device reached our abode in the usual zebra-striped packaging. The packaging takes the similar form like the company’s previous devices albeit the box is a little larger this time. It accommodates the 121.0mm x 75.0mm x 13.7mm device along with USB cable, charger, stylus, stand, earphones and user guide. The device poses a simple look with a frame carrying its 4.3-inch widescreen display. Above the screen on the extreme left, the company has scribbled Cinema 4.3 while below the display is Zebmate and HDTouch. The upper edge embeds the power button while the left one affixes microSD card slot, headphone jack, USB connector and 3.5mm TV-out jack. The back side reveals the speakers with a few letterings above it and also a reset button.

The Zebronics Cinema 4.3 leaves us with really few words to pen down about its design which is quite plain Jane. It is considerably light in weight but the frame area does not appear sturdy. The all-plastic black look isn’t appealing but we won’t say it’s bad either. However, we wouldn’t say the same about its ruggedness. On holding the device in the horizontal position, one will notice the provision made on its upper and lower edges to attach the stand. Thus, it comes handy while watching content especially movies.

This music player’s resistive touchscreen display measures 4.3-inches. The navigation is enabled with the included stylus (do not even try using your fingertips), offering moderate response. The stylus has a steel body with the tip and back crafted of black plastic. Moreover, neither has the company carved any space within the device to insert the stylus nor does it come with a lanyard slot or any other attachment. So, one will have to carry it along separately and keep a keen eye to avoid misplacing it. The screen features 480 x 272 resolution. The low resolution does not render the screen eye-pleasing.

Moving to the user interface, Zebronics keeps it simple and straight forward here as well. Ensuring ease of use, the interface shows basic Video, Music and eBook icons. Tapping on the arrow on the left side pulls out other icons like Photo, FM, Record, Resource, Setting, Light and Theme. The company lets device owners choose from three infused themes. However, the device does not allow viewing all three themes in a single page and have to switch through two themes to select the third one. 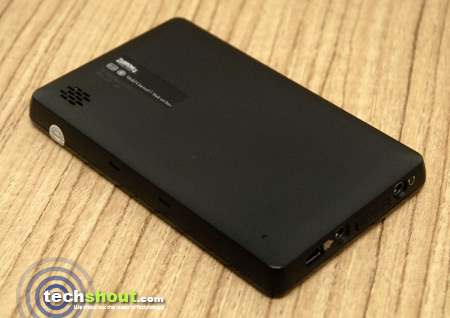 First we tested its audio quality that seemed pretty decent. The device supports FLAC but does not come with support for AAC format. The music interface is neat and simple to use. Apart from the bundled earphones which were fairly good, we used the Bose AE2 headphones and the audio quality was maintained. On enabling the loudspeaker, the maximum volume level matched to one of the not-so-high-end phones. However, do not expect much from its loudspeakers. Under settings, we could get our hands on EQ mode, playing mode setup, lyric color and lyric display.

We also played a couple of videos and a 720p movie which were handled pretty by the device, we must say. The interface was smooth to tackle and we could effortlessly move to any part of the movie or video. The device adheres to several video files such as AVI, MOV, MKV and more. Moreover, it also supports lyrics and video subtitle display.

While using the e-book feature, one can add data only in .txt format which may turn out to be quite annoying to many. Besides, we could bookmark a particular page, change the font size, switch to the reading mode as vertical or horizontal, and also choose from four distinct backgrounds. The device comes with a decent recording capability. The interface displays huge buttons for easy access such as record and stop, alongside the recording time, file size and touch volume controls.

The 8GB of built-in memory spruced up with support for a memory card further helps elevate the user experience. We could load it with most of our favorite music, videos and photos. The battery life let us use the device for over four hours. You could also take advantage of the energy saving options and stretch it further. One of its unique features is the Light icon which let us adjust the brightness levels by clicking on the icon embedded on the screen. The device supports TV-out functionality but it does not pack a cable which users need to be purchase separately.

Zebronics has crafted a simple, easy to use device at an affordable price tag.

The 8GB of built-in memory (for the price tag attached to the device) is a good inclusion.

The device does a good job on the audio front.

The included stand turns out to be helpful while watching content.

We wish Zebronics starts adding a dash of color to its products. It would have helped Zebronics Cinema 4.3 shed off its plain Jane look.

The resistive screen integrated by the company does not respond that well. Further, the device leaves no room for a stylus and it needs to be carried separately. This could be even more tedious for the clumsy ones who are likely to lose it.

We really missed physical volume controls as the touch volume scale wasn’t smooth to use.

Portability has become the latest fad with a wider desire for on-the-go entertainment. Zebronics may have extended its portfolio with the inclusion of this touch device but we think it hasn’t hit the right chords with the infused touch functionality. Nevertheless, the device works relatively well at delivering tunes and even 720p videos. Besides, it packs in several other features, all under an affordable tag of Rs. 4,200. The Zebronics Cinema 4.3 gets a rating of 7 out of 10 from us.