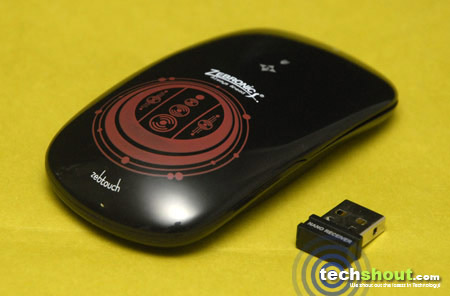 The penetration of nanotechnology into engineering labs has chipped huge machines into miniature figurines. Be it the transformation of a super computer into a desktop and netbook or a mouse into an even tinier vermin, we’ve been witnessing dramatic changes in the sphere. Adorning our desk is one such creation namely the Zebtouch 2.4G Wireless Mouse from the house of Zebronics. A compact and condensed mouse, it seems to have undergone major alterations of the times. Almost as flat as a wallet without a penny, the appearance of this offering differs severely as opposed to the pebble-like structure on the company’s official website. Here is a comprehensive review outlining the Zebtouch 2.4G mouse’s performance as it helps us make our way through the clutter of content on varied computing systems.

Following the advent of motion sensing technology in the gaming sphere, several innovators have been on the move to tap functionalities with ‘senses’. This offering from Zebronics comes across as a product of similar ideas, though strictly for routine computing activities. The upper surface of the mouse has been sculpted in an arc-like design with an extremely diminutive curve. Painted with a black tint, its enclosure sports a glossy texture but falls short of throwing a shiny blink. Some indications on this panel highlight paths for using its navigation tools like the left, right and middle click as well as scrolling options on the frontal posture. This surface has also been entrenched with a circular design splashed in a maroon-like hue.

The lower half of the mouse has been carved out from a black-colored plastic material which cries off the device’s architectural standard. A major portion on this end is occupied by a battery flap with two cutouts, one opening up some space for the on/off switch. Whereas, the other outline makes way for an optical sensor which blinks red while the mouse is turned on. The peripheral is also wrapped up with a USB stick that can be plugged into the allotted port on your desktop or laptop. Once the stick is inserted and the power button turned on, you can surf along the computing wave without looking back. Its compatibility with Windows 7 and Mac OS X is an added advantage along with a switch and touch scroll sensor life of 30,00,000 cycles each. 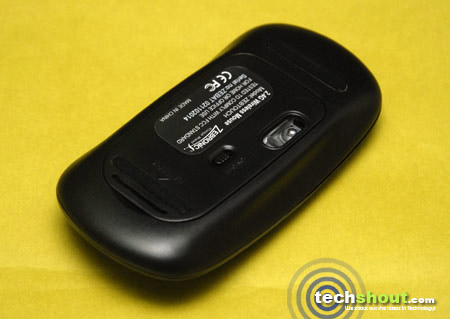 As you ride with the peripheral, its agility and feather-light weight initially tends to grab attention. What also caught our interest through the process of using it is that the construction of the mouse does not sport even a single distinctly carved out button. Although our consciousness retained this aspect of the structure, the absence of conventional buttons did prick us a bit when we actually got down to employing it. Not that it completely eliminates these keys but the flat surface of the mouse can be troublesome for those who prefer or are accustomed to the usual elevated hinge. The switch force of 60±15g is fine but at times, it could get a little difficult while editing images on Photoshop. In fact, there were times when it tested our patience but the wait seemed like an endless road with no refuge. Nevertheless, the 1200 dpi resolution of the mouse engineers a satisfactory performance on the whole.

The overall design of the Zebronics Zebtouch mouse is, to say the least, unimaginative. It may be expedient for palms of a smaller size. However, those with large palms could face a problem while bringing the mouse into play. We found it somewhat uncomfortable while the touch-enabled middle button only added into this disappointment. All the same, it is not as disoriented as the dimension functionality since the scroll ability ensures smooth navigation for vertical movements. Its touch scroll force of 2 – 5g and middle switch sensor need quite some tweaks. As we move our eyes over its Rs. 850 price tag, it seems like the company has justified the ZebTouch 2.4G wireless mouse’s unimaginative attributes. 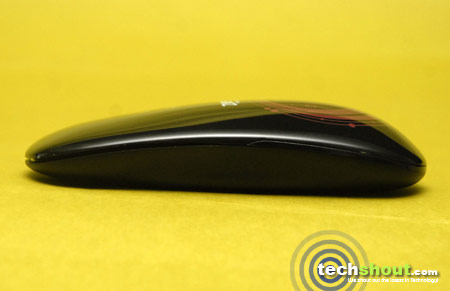 We liked the fact there is no need of installing additional software on the computing system while getting started with the mouse.

The clumsy construction kicks off a string of issues with the peripheral’s fragile structure.

The scroll function can be deemed to be weaker than expected which adds to its woes.

The idea of wireless devices has been more than just appealing to many. The product’s ability to capture the essence of the concept at the baseline is undoubtedly appreciable. However, the tech realm has been inundated with wireless mice which when compared to this product could score extra points. What stands in its way to beating some of the leading innovations across the same segment are its plastic-based architecture and miniature size. Few tweaks to the middle button too are necessary if the company intends to take the mouse onto a newer level. Nevertheless, we liked the simplicity with which it connects to a computing solution as well as its Rs. 850 pricing. Finally, the Zebronics Zebtouch has bagged a rating of 6.5 on 10 on our shout chart.