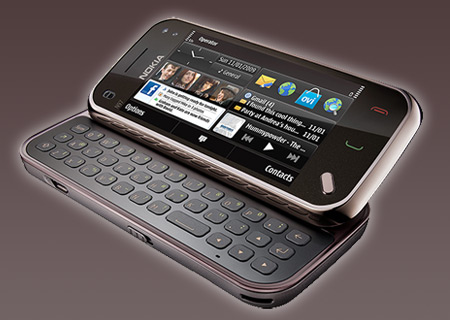 Nokia had managed to turn quite a few heads around in December 2008 with its Nokia N97 phone. Amidst the churning of rumor mills we then saw the company launching a sibling to the handset in the form of the Nokia N97 Mini around October 2009. Were mobile enthusiasts pleased? Well, they seemed like, a minor strip down of the original slide-out phone minus its ‘bulkiness’ sure seemed enticing. And that’s exactly what we got our hands on lately, the Nokia N97 Mini, all geared up to show us what its all about.

With two siblings around, comparisons are bound to happen. So for those who are wondering, just replace the original phone with an 8GB storage memory, a 3.2” touchscreen and a seemingly shorter battery life with a few more tweaks here and there and voila the compact Mini is what you get! Well, the younger sibling though is not a complete downsized version. Much unlike popular belief, besides being obviously more compact in terms of form factor, the phone certainly creates its own distinct identity.

A date with the Nokia N97 Mini phone got us excited and we couldn’t wait to open the black recycled packaging that held the phone and its accompaniments. The box included a USB cord charger, earphones with replaceable earbud options, user guide and a couple of other assortments. When the box was opened, we were almost instantly allured by the elongated yet compact form factor of the cherry black Mini. Despite the large 3.2” screen, the handset was not that bulky. The phone is around 113(h) x 52.5(w) x 14.2(d) mm in dimensions and weighs 138g.

Once in the hands, the most noticeable part of the phone is its bare naked appearance that reveals just the 3.2” touchscreen having 640 x 360 pixels, 16.7 million color resolution. Yes, there are just three buttons below the screen namely an interestingly fashioned metallic oval-shaped physical button for the menu followed by a call answer and call reject button. Sliding the phone pops up a QWERTY keyboard hinged to the tilting screen. When you slide out the keyboard, you are sure to get a ‘netbook-like’ feeling.

The panel on the left of the QWERTY keyboard houses a USB port and a keyguard switch which can be slid to lock and unlock the phone. The phone’s right panel includes a dedicated camera key and a volume adjustment button. We liked the details on the volume button with a raised and fuller circle for increasing the sound and flat circle for lowering it. The power button is right on top, followed by a 3.5mm headphone jack.

Turning the phone to its back reveals a brown black back panel. Featuring the camera’s lens and flash, it’s quite a neat back panel, something we can claim to have not seen in a long time. The overall appearance of the phone is simple yet alluring making it great to tag along in both important business meetings as well as the most happening party in town. You can charge the phone through the USB cord by connecting it to your computer or notebook. A light blue light glows at the port indicating the USB cord is connected.

A rather clustered homescreen welcomed us when we first switched on the phone. The touchscreen of the phone was very much alive quite unlike other touch-enabled phones and responded at a mere touch of the finger. The widgets on the homescreen can be customized as per your preference and yes the very first thing we did was declutter the phone’s homescreen. A total of six widgets contained on the homescreen allowed us to add a host of useful shortcuts like Web, Messaging, Clock, Facebook and more. The bottom of the homescreen includes three functions namely Options, Numeric Keypad and Contacts. Clicking on options lets you Edit and Hide the widget content while also being able put it in the online mode. 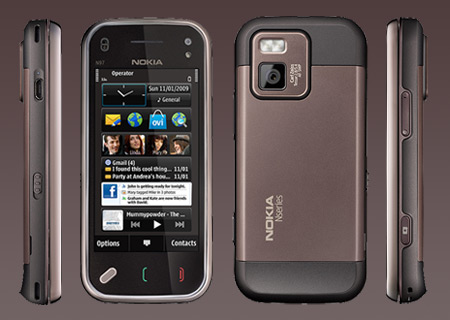 Once you dive into the Nokia N97 Mini, each feature is accompanied by a ‘Show open apps’ function that reveals the applications that are currently opened. Just like when you are on a desktop, the phone lets you effortlessly toggle between various activities like listening to music, writing a message or even playing a game. Using the dedicated menu button to hop on to the menu reveals a very organized menu. The menu can be personalized in either a list view or a grid view. Clicking on the organize button will allow you to shift the various functions as per your choice. You can even move functions to a folder.

With the slide out QWERTY keypad, a host of activities including typing messages and surfing the internet were hassle-free. In fact the phone’s keypad gives a feeling that you are typing on a netbook. With the keys optimally spaced out and brightly illuminated, this was one quarter where the phone gets a huge thumbs up from us. The high resolution screen ensures watching videos is a thoroughly enjoyable experience. The phone also included a DJ Hero Mix game which uses the touch capabilities of the handset to the maximum. You can wear the cap of the DJ and get the party rocking to your beats. Though we wonder why getting in and out of the game was so annoying as the loading appeared to go on forever.

The slider when closed displays the homescreen in the portrait mode and opening it switches it to the landscape mode. The very first feature we checked out in the phone was its Music player which we were actually tempted to thanks to the super-chic earphones bundled. The player includes the music library, the music store and Radio with RDS. The player’s equalizer let us tap to the beat by choosing between six presets namely Default, Bass Booster, Classical, Jazz, Pop and Rock. While being able to create our own playlist we could also set the balance, loudness and stereo widening of the audio. More than enjoying the music, we were quite enthused by the 3.5mm earphones. Well, they were screaming style and were we impressed? A big ‘Yes’! Endowed with replaceable silicone eartips that lodge deep in the ears, you are ensured a clear and seamless audio experience. An elongated flexible clip in the center houses rewind, play/stop and forward buttons. Its edges have neat volume increase/decrease buttons and a call answer button in metal.

Next, we couldn’t wait to give the phone’s web browser a test. We realized pretty early that it’s really difficult to get off the browser. The N97 Mini acts weird when you try to exit the browser, (probably wanting you to stay longer). Also exiting from applications is quite a task sometimes and the phone behaved rather funnily when we had many applications open and we tried exiting from one. Clicking on the Ovi application required us to download an update to the Ovi store which surprisingly completed with the installation even before we could snap our fingers. Besides enabling us to download a couple of applications and games, opening the Ovi store on this phone was certainly a visual treat. WLAN connectivity is quick including identification of networks and web browsing. The inbuilt Ovi Maps application was quite helpful. With three modes namely Map, Satellite and Terrain, locations could also be stored as Favorites.

The incorporated 5MP camera included a Carl Zeiss Tessar 2.8/5.4 lens. Including zoom, it’s endowed with a number of interesting attributes. While we could choose to keep Flash On, Off, Automatic or Reduce red, the camera also includes a host of scene modes from close-up, portrait and landscape to automatic and sport. With a self-timer that can be set up to 20 seconds, users can bring alive the photographer in them by also tweaking the color tone, white balance, exposure or light sensitivity of the image to be captured. While being able to set the contrast and sharpness, you can also click photos in sequence or as a single shot. The former helps capture many images of the subject in succession unless you actually click stop. There’s also a front facing secondary camera.

A refreshing list of software updates further keeps you posted about any new versions of applications housed by the phone which were actually quite a wide list. With Office managing work files is a breeze while the Search tool lets you search through the contents of the phone and online. The Location application lets you gain landmarks while also offering GPS data and positioning information. You can also use the MyNokia app to sign up to your Nokia account. As the N97 Mini phone seems to include an application for every need, a Msg Reader application reads out text messages. Some other applications the review unit we received included Drawing, JoikuSpot, Qik, Boingo, Traveler, YouTube, AccuWeather, Amazon, AP Mobile, Bloomberg, CNN Video, Elle, ESPNsoccer, Facebook, Friendster, Hi5, MySpace, Slideshow and Vlingo.

The high-spot of the phone would definitely be the slide-out QWERTY keypad that ensures typing is as effortless as it can get.

Screen is optimized for an enjoyable imaging experience.

The camera could easily give entry-level digital cameras a run for their money with its clarity.

The earphones were certainly one of the best inclusions offering enhanced sound and functionality.

Battery life is pretty good as the phone lasted around 1.5 days on a single charge.

The phone could have been a little lighter than it is currently. A wee bit of styling on the front chassis would also help.

Like a ‘typical’ Nokia smartphone, we were quite disappointed to see the interface lagging. Though rare, the phone did freeze when we tried switching between multiple applications.

We would have also liked the phone to be tagged with a lower price.

Lastly, we found the phone heated up too quickly.

If you strongly believe that ‘An application a day will keep your worries away’, then the Nokia N97 Mini is sure to grab your attention. After all not many stylish phones can claim to offer a truckload of software with its efficient operation. The price though might find you fuddled on whether you should actually buy the phone. The handset will cost you approximately Rs 30,939. As far as rating is concerned, we’d give the phone an 8.5 out of 10.