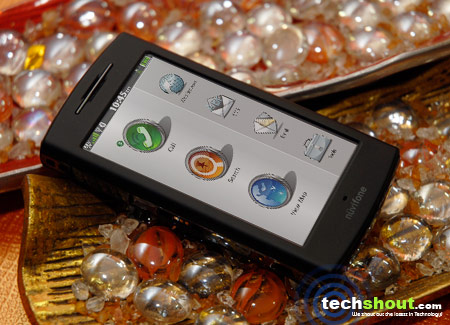 Most of us will remember Garmin actually announcing the nuvifone way back in 2008. ‘Like they say better late than never’, early in 2009, we saw Garmin teaming up with Asus to announce a series of location-based phones under its nuvifone label. By the time we reached the third quarter of 2009, the companies made way for their first co-branded navigation handset named nuvifone G60. This year, the Garmin-Asus co-branded alliance popped up quite a few interesting devices like the nuvifone Android A50 and the M10 specifically, at the Mobile World Congress.

Once in your hands, the size and screen of the phone seem to be just right. It seems to typically fit the bill with being not too big for a phone and not too small for a navigation device. While the candy bar form factor is not really bulky, we would have liked it to be a little sleeker. If you are among those spending most of your time on business trips, you will certainly appreciate the stylish and neat chassis of the phone. The case of the phone is black with a matte finishing in the front and back. While giving it a really nice look, it’s also a nice move away from garishly glossy phone finishings.

The left and right edges holding the front and the back panel are fabricated from steel while the top and bottom part of the chassis is glossy. There’s a microSD card slot on the left edge followed by a USB port. A dedicated camera key is housed on the bottom of the right edge and above it is a button that helps increase or decrease the volume. The front speaker is featured in a slit just above screen while the words ‘nuvifone’ are engraved neatly below the screen. Turning the phone reveals the Garmin Asus logo neatly tailored onto a thick strip of steel which also includes the camera lens next to the logo. There’s a square shaped speaker just above the camera lens while the top portion houses the 2.5mm headset jack. Just besides it is the power on/of and lock/unlock button. Other than this, the front face of the phone is bare with no buttons.

The phone’s main screen comprises of 3 functions namely Call, Search and View Map. A neatly divided scrollable menu lets you browse through the other contents of the phone. The menu can be customized as per your preference by simply going to the Application Settings. With the good old touch of the finger, you can alter the Main Menu Order depending on your choice. We could also adjust the Brightness up to 100% through the Display Settings. There’s also a Color Mode that chooses from the Auto, Daytime and Nighttime options to render the best display resolution. One feature that you would find on most touch-enabled handsets today mainly a shortcut to the home menu has been given a miss on this phone, though.

Each function other than the navigation has been kept to a bare minimum. In fact there are hardly any setting options on most features. The phone’s user interface was nevertheless satiating. All contents in a menu are organized alphabetically, so simply choosing those particular alphabet sets will allow you to effortlessly take your pick. The phone also boasts of an accelerometer that enables it to fit the screen in both the portrait and landscape modes. With neatly designed menus, the tabs for call, contacts, the dialer screen and more stick to basics. The extras option in the interface includes features like weather, flight status, converter, local events, fuel prices and Ciao! The latter is a location-based social networking platform. 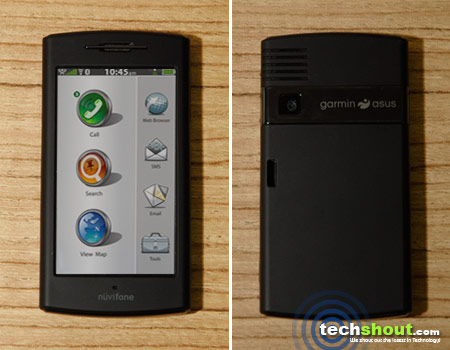 While a QWERTY keypad is displayed in the landscape mode, the phone shows off a standard keypad in the portrait mode. The spacing between the buttons and the buttons by themselves make for very inconvenient typing particularly when using the standard keypad. It seemed to be quite a pain as the keys were too small and more often than not we ended up typing the wrong keys. Equipped with a music player, the phone also includes an Audio Boost feature. Interestingly opting to turn on the feature displays a preloaded warning about the harms of listening to loud sound.

Though the phone supports Bluetooth, there’s no send via Bluetooth option in messages, images or music files. Quite annoying was the fact that even after scanning for the Bluetooth feature, we couldn’t add any device to the phone. It just didn’t seem to detect any. When we tried connecting to a Nokia E63 phone, we were connected as per the status, though the phone seemed incapable of sending or receiving files. The Wi-Fi enabled phone allowed us seamless internet connection only after being persisted long enough. While it took us quite some time to get around the connection, once in, the browsing experience was uninterrupted. Though we did observe mobile optimized sites performed much better than those that were not.

The phone offers more than a decent call reception, though the same can’t really be said about the GPS signal. When compared to another PND device, it showed low signal. As far as navigation through maps is concerned, you are offered in-map navigation options that include ‘Go’ to visit the address that may have been entered recently. There are also the ‘Save’ and ‘Send Location’ options that allow you to do just that. If you’ve used dedicated navigation devices before, the G60 will disappoint you with the absence of the ‘Go to’ option. It’s funny why a device that is navigation-centric would leave that out. As a blend of a navigation device and phone, the G60 interestingly let us toggle between calls and routing without any hassles.

The phone offered us maps of places we were looking for comprehensively. Including key places, it didn’t seem to lack one bit on this front. It’s mainly the entering of an address or trying to search for a place that can be quite troublesome. Having toyed around with quite a few navigation devices in the past, we wonder why the G60 makes it so complicated. Home, Points of Interest, Favorites, Recently Found, and Cities are some other features that essay navigation. Next, we decided to test the device’s navigation skills in the car and might we say we were mighty impressed. When we mounted the device in the vehicle, it was seated neatly as a complete PND. Selecting an address enabled the device to give us voice directions and other instructions which were quite accurate.

The screen is certainly among the best touchscreens we’ve handled so far. Responding quickly to the finger touch, swiping through the phone for navigation was also a breeze.

The surface of the phone can easily claim to be non-slip making the phone suited for the car dashboard.

The rear speaker ensured navigation instructions were loud and clear. Also frittering between applications is pretty quick and the phone can claim to have offered us a virtually lag-free experience.

Navigating through routes using the vehicle was by far one of the best experiences of this phone.

It would have been really nice if there would have been a shortcut to home on the main menu. Incase you dig really deep into a menu or subsequent submenus; you have to make do with the back button on the screen that takes you back in order. There’s no way to jump straight to the homescreen.

The screen though large is not supported by enough potent features. Also the screen seems to align itself as per its own whims and fancies. The switch time between the portrait and the landscape mode seemed like eternity on some occasions.

Even with the case, carrying the phone in the pocket may not be the best option as it’s too wide.

For obvious reasons a 3.5mm headset jack accompaniment would have been preferred. We would have also liked if the phone had a few games thrown in.

On the whole, the Garmin-Asus G60 can be a good choice for those mainly looking at a navigation device that also allows you to engage in conversations. With navigation to its core, despite the complicated functions, it still emerges as a great routing device. If you’ve been caught by the recent smartphone fever, then you may not really be attracted to the phone. As a navigator that also allowed us to make more than a few calls, we’d give the phone a neat 8 out of 10.