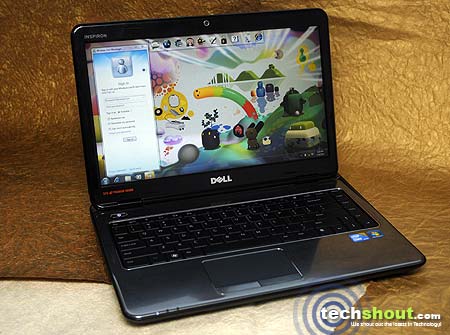 While technology manufacturers are increasingly crowding the tablet terrain, there’s still something about conventional notebooks that can’t be missed. Throw in the now much in demand fuelled processors, rich graphics, a stylish tailoring and a mean machine is what you get to ogle at. That’s just what came to our mind when we spotted the Dell Inspiron 14R-N4010 notebook when it trotted into our environs. A member of the recently launched Inspiron family, the notebook’s sleek profile in a completely alluring fabrication should turn around a few heads. The line-up is said to be an upscale to the earlier launched Inspiron 14 notebooks albeit with better hardware and the much noticeable higher price tag.

‘Designed to Keep Families Organized and Entertained’ is how Dell described this portfolio of hot gear at launch. Unwrapping the Mars black Dell Inspiron 14R-N4010 notebook only had us nodding our heads in agreement. You can’t help but notice the eye-catching argent accent running along the device’s edges almost as soon as you open the box. What seems to set apart this stylish portable computer is its makeup and we instantly spotted the lid hinge integrated approximately half an inch ahead at the back, a by now typical feature of Dell notebooks. The power plug and VGA port find their place at the back panel. The right edge includes a fairly large DVD burner followed by the microphone jack, headset and USB ports. Moving over to the left side and the notebook is outlined with an Ethernet port, the CPU vent, HDMI port, eSATA port and a multi-format card reader. The notebook when shut appears full and its prominently curved edges give it a nice rounded feel.

Fitted with a 14” LCD, the 5.1 pound Dell Inspiron 14R-N4010 isn’t too heavy to tag along. Open the notebook and the keyboard tray in a silver hue is revealed. Keying in content through the keyboard was very comfortable and the soft buttons make typing a breeze. We would have appreciated though if the space bar was set a little higher as the present position of the button wasn’t too convenient. The large and firm touchpad houses two buttons separated at the bottom for right and left click. While the speakers are placed beneath the notebook, Dolby Digital SRS Surround sound is neatly engraved just below the display. The top chassis bears the familiar Dell logo on the center. We thought the edges of this notebook to be a wee bit bulky, considering it didn’t hold much. A close look at the topmost row on the keyboard shows a couple of extra attributes besides your conventional Fn keys. There’s a dedicated button that lets you configure the screen with multiple displays and the options include a computer only, one to duplicate and extend and a projector only. The buttons for volume, forward and back are also located on the top, sharing space with a few Fn buttons. Bringing to the fore Dell’s greener side is the committed Battery Meter key on the keyboard. 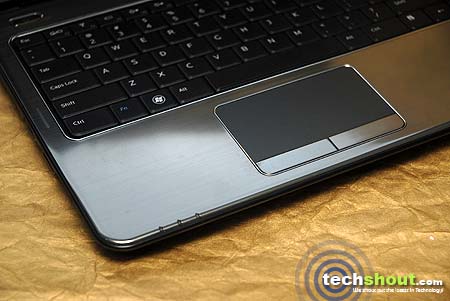 The 14” widescreen display with TrueLife technology is glossy and can be tweaked to a maximum resolution of 1366 x 768p. It’s not the best screen around and though we did enjoy the Inception trailer in HD on YouTube, we would have appreciated if it didn’t show our reflections. Dolby’s expertise comes to play with the SRS Premium sound at its best demeanor when we watched Clash of the Titans. Our only grouse was we could actually feel the sound every time the ‘Olympians’ battled the ‘Titans’. The notebook vibrates vigorously in audio-enriched pieces and we literally rattled when the Argos soldiers ravaged the Zeus statue on declaring war against the Gods. With its virtually sluggish playing of the graphic-intensive DiRT2 demo, it didn’t really satiate the gamer in us. We would have also liked Dell to throw in a few more games other than the plain old titles from Microsoft.

Gliding to the interface, Dell keeps clutter to the minimum with the Dell Dock taking care of key attributes. Seated icons come to the front when you hover the mouse over them, it includes Email and Chat, Internet, Photos, Music, Videos, Office, Security, Help & Support, Recycle Bin and Internet Explorer. What’s interesting is each includes options in a dropdown arrow letting you choose the function for a particular feature. So when you move the mouse over Video you get three options namely Capture Video, Play Video and the Windows Media Center while Office offers Word, Excel, PPT etc. The Dock can be customized to hold functions of your preference. The homescreen can further be personalized with backgrounds (Dell throws in interesting themes) and gadgets like Calendar, Clock, Weather and more.

Internet loading on the Dell Inspiron 14R-N4010 is crisp and downloading files too was not really a task. It took us about a minute and seventeen seconds to download a 4MB file. Enabling the Dell Extended Battery Life allows you to save power and like most other companies toying around with this feature, the screen goes a bit dim with Windows switched in the Basic mode. The incorporated Intel i5 core processor running at 2.2GHz sure seems to be doing its job well while the Windows 7 interface is a neat complement to the bundled hardware. A brief run through the Programs installed on this device reveal the Snip tool and a magnifier too. While we’ve seen the Snip tool in a couple of notebooks earlier, the latter was something new. If our guess is right, it should suit the needs of those short on sight as you can magnify a particular region in the range of 100% to 1000%.

The upper bezel is well-fitted with a 1.3M webcam, the resolution of which surprised us. Both instant image capture and video recording were smooth at the 1280 x 720 resolution. The Dell Webcam Central lets you play around with captured content both before and after. Video effects lets you add a background to captured images and video with options spanning from picturing yourself in a spaceship or just pulling up a bridge (a friend for company will only add to the fun). You can even create a Media show right through the application or tweak the color, brightness and more of recorded videos. Sadly though, only videos below 1280 x 720 can be enhanced with all these attributes. Add to this the fact that the notebook survived just about 2 hours and 45 mins of watching a movie and switching to the Internet until the battery began to flag. 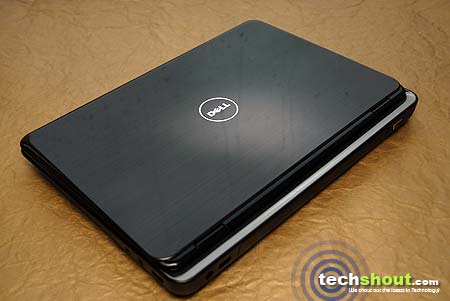 The incorporated Intel processor ups the ante as far as surfing the web and multitasking is concerned.

The notebook does score points on the design front too.

Dolby’s SRS Premium Sound should strike a chord with audiophiles.

The laptop’s side frame could have been incorporated with at least a couple of more USB ports.

Also the interiors of the notebook look a wee bit nude and could have been added with a few more keys say dedicated buttons for the Dell Webcam central.

The device ran out of battery life just too early and won’t satiate those looking for some fun on the run.

The incorporated ATI graphics sure eat up on battery life and it’s a pity Dell didn’t think about fuelling the device with switchable graphics. Nevertheless, beneath the well-rounded bearing there is a suite of features that will excite the average laptop enthusiast. Those on a shoestring budget too might just consider picking up the Dell Inspiron 14R-N4010 for Rs. 42,720. We give the notebook a good 8.5 out of 10.