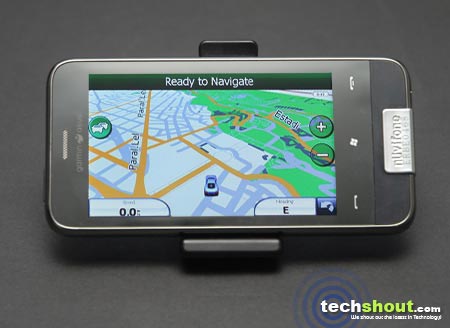 We’re on the subject of finding our way around places because the Garmin-Asus nuvifone M10 landed on our desks begging for a review just this week. It’s a smartphone that comes in black packaging saying ‘Phones for the location-based life’. Personal navigation used to be all about stopping a passer-by and asking for directions until Google Maps became so popular. Trust us on this one, our resident IT engineer’s grandfather hasn’t been spotted with a paper map displaying route information since he got a smartphone and someone to help him operate it. While you can still spot those cumbersome maps flapping in the faces of tourists and random vehicle owners, an increasing number of people are reaching for their smartphones or TomToms to find their way around.

Apart from the nuvifone M10, the packaging housed a car charger, earphones, a Getting Started CD, a quick start manual and a mounting kit. The phone has a special elongated crevice along the right edge for hiding the stylus whose importance we admit to have underestimated initially. Just one look at the handset is enough to tell you that it’s neither of the bulky or slim profile categories. It’s a healthy-sized device that has a 3.5” 800 x 480p WVGA TFT resistive touchscreen, which is a pity. With some applications, it’s difficult to figure if it’s the embedded 600 Qualcomm 7227 processor that’s slow or just the resistive touchscreen which just doesn’t seem to get the message until you’re driven to an elevated state of frustration. This is usually the point where it’s best to whip out the stylus and start tapping it against the display after brandishing it with a flourish like a magic wand. 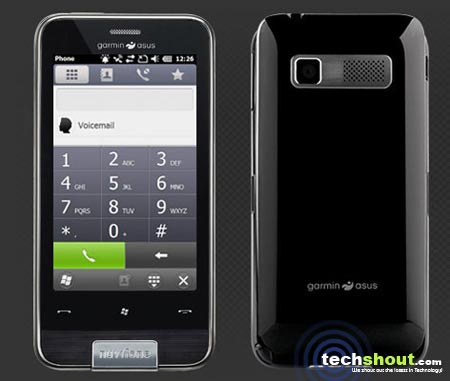 The back panel of the Garmin-Asus nuvifone M10 seems to have a sprinkling of maroonish glitter just below the surface, while a silver aluminum plate sitting on the front panel’s base tells you it’s a nuvifone. The former doesn’t look like a dependable sentinel for the rear compartment housing the battery and microSD card though due to its rather flimsy plastic construct. Three flat tactile buttons just below the screen allowed us to pick up/make calls, cancel calls and navigate to the start menu or homescreen and open/switch between apps. These touch buttons sitting in a row aren’t backlit though, so it’s going to be difficult using them in poorly lit environments. Dedicated keys for volume control, locking or switching the phone on/off, a microUSB connector, a 3.5mm jack and a power connector for the navigation cradle pepper the edges. To sum it up in a single line, the look is fashionably minimalistic with black and textured grey surfaces touched up by the maroon sparkle and silver plate.

We couldn’t help our thoughts from wandering away to the iPhone when we saw the slide to unlock feature, the customizable homescreen interface, including the three fixed icons on the bottom. There are two customizable homescreens in all as well as fixed Call, Search and View Map icons on the dock placed near the base. Since there’s already a call button placed below the display, the permanent Call icon on the touchscreen is too obviously a redundant feature. You know it’s a phone optimized to deliver location-based services from the word go by glancing at the other two fixed icons below the app widgets, but we’ll save that highlight for dessert. Head to the Wireless Manager for switching the phone to Flight mode or enabling Bluetooth, GPRS, GPS, Direct Push, Wi-Fi sharing as also Wi-Fi. The available phone themes boast of fancy designer names such as Isaac Mizrahi purple, Ron Arad orange and Vera Wang red. There are a bunch of other personalization options on the M10 that usually come with most phones. While the screen is viewable in portrait or landscape modes, it takes some time before the phone realizes that it’s been turned on its side and responds in accordance. 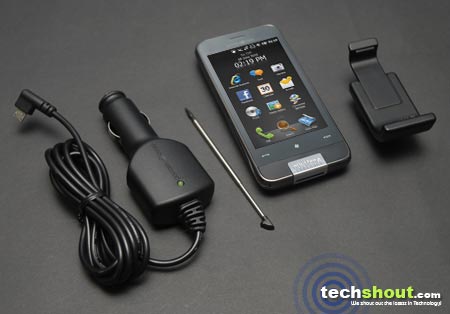 The Garmin-Asus nuvifone M10 connects to the web quite speedily and features a scroll control on the right for zooming in or out of web pages as also controls at the base for going forward or back, summoning the virtual QWERTY keypad and so on. Typing out messages or mails on the virtual keypad seems easier in portrait mode as compared to landscape mode unless you’re using the stylus, of course. The Windows Mobile 6.5.3 Professional OS may not be the hottest mobile OS on the block, but it does look comfortable on the M10 right from the dedicated button below the screen to the Windows interface that it delivers at a touch. There’s YouTube, Facebook, Bing, Windows Media, Office Mobile, a widget for checking flight status or getting to the Marketplace and one measly game of Solitaire apart from other apps. The music and video playback features are of your standard smartphone nature. There’s not much to say about the battery life apart from the fact that it drains away before you know it.

The 5MP camera does not offer flash although it does click images in 640 x 480, 1280 x 960, 1600 x 1200, 2048 x 1536 and 2592 x 1936 resolutions. Content can be captured in MMS video, video, picture and GPS modes along with white balancing, effects, self-timer and various other adjustable features. Its ability to pick up uneven skin tones and the lightest of scars is not really indicative of how adept it is at telling the truth. Better quality cameras should be able to intuitively detect and introduce a subtle blurring effect to even out skin tones. That’s why we love those digital cameras. What we really miss on this phone is a dedicated camera key(ch) on the exterior. Clicking pictures of yourself while keeping a finger on the icon for snapping images is practically impossible with only the resistive touchscreen to aid the cause. Funnily enough, if you forget to put in the microSD card before attempting to take pictures or videos, the unhelpful phone’s going to let you figure out why the camera doesn’t work all by yourself. 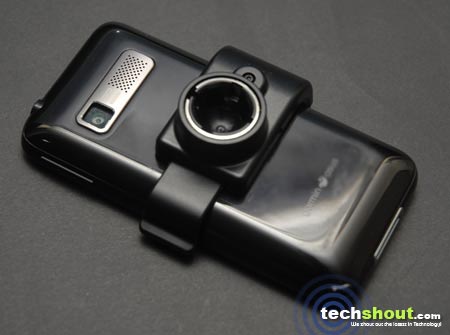 The Search feature has a whole bunch of useful services including a travel guide, routes, coordinates, POI that throws up places to eat or stay at, ATM locations, fueling stations and much more. Want to assure your impatient friend that you are indeed on the way to meet him or her at the restaurant? Just send a visual of your current location as proof via the e-mail or MMS option. This Garmin-Asus nuvifone M10 picks up GPS signals pretty efficiently and provides voice-based turn-by-turn directions, lane assist and junction view. The Garmin location-based service expertise is very apparent once you start relying on these maps for commuting needs. It caters resourcefully to the male ego which forces men to spend more time lost on the road as compared to women. We’re not expressing a bias here, but just repeating a well-studied and non-controversial phenomenon. Then there’s the View Map feature that is simply awesome at offering advice on how to get to the desired destination. All in all, the nuvifone M10 gives the impression of a gizmo specially built to lead the way when it comes down to acting as a GPS navigation device that also works as a smartphone.

The nuvifone M10 presents the best of GPS navigation with the Search and View Maps icons that are fixed at the homescreen’s base.

So what if the chassis is not super-slim, the phone still looks very elegant with the unobtrusive buttons and mostly black color scheme highlighted by the silver plate.

The web browsing facility provided with this handset is pleasingly swift and intuitive in spite of the Internet Explorer browser. Somehow, the browser doesn’t look that bad on this phone.

The touchscreen behaves very erratically at times. Those used to capacitive touchscreens may suffer a little on account of the wayward one on this handset.

The battery life drains away pretty quickly. Three hours of heavy usage is all we got on a full charge.

Rs. 19,990 is not a bad price for the feature-rich nuvifone M10. It’s a phone designed particularly for those obsessed with finding their own way around and discovering new places. It’s a 9 out of 10 rating for the Garmin-Asus nuvifone M10.