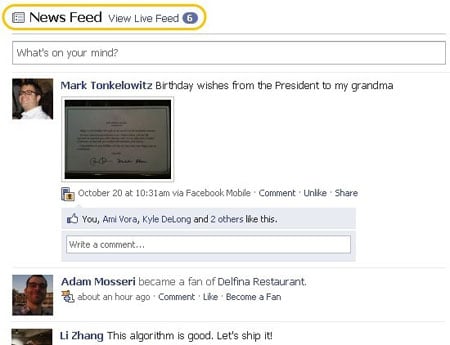 Facebook is planning to launch a new way for people to interact with their News Feed today at a press event and there is a lot of talk and guess work about what exactly it will include. It seems we might be looking at larger photos, an image feed from the site as well as from Instagram, and a new method of updates about the music friends are listening to.

Facebook has barely touched its News Feed since it launched back in 2006 for the web and in 2009 for the iPhone. What we have at present is somewhat bland, with just friends’ faces appearing towards the left with a status update on the right. The rest is just empty space not being utilized for much.

It seems the company wants to change the way people receive content on the social networking platform. The thinking is that content-specific streams will have us more engaged in the site, whether we’re looking at images posted by friends or at advertisements.

Even with what we have now – Top News and Most Recent – things are simply presented in a re-shuffled manner, with not much new and relevant content showing up. The SNS has already dug in, in an attempt to make searching on the site a more fluid experience. Graph Search adds a new dimension to finding information and content relevant to specific events, people and places, and it seems this press event might bring us an extension of the same philosophy.

An anonymous insider has spoken to TechCrunch saying that multiple feeds along with larger images in users’ posts and ads will be revealed today, a line of thinking apparently also corroborated by several developers. Image-based ads are also thought to come to the mobile version of the site.

The company has been steadily making minor changes to its streams, and soon after the September 2011 developer conference we saw the debut of the music feed. This was minimal at first, but gained a little momentum in time. It can be found under ‘Apps’ in the sidebar. A few other update avenues were added such as the Pages feed.

For now there’s no official confirmation on what capabilities the new Facebook News Feed will have. We’ll just have to wait a little longer to find out exactly what the company has in store for us.