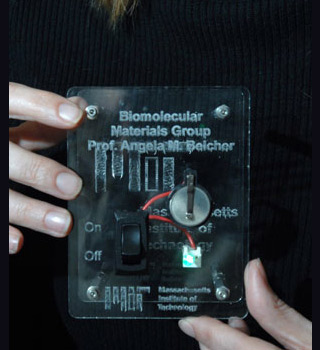 With natural resources depleting at a sky-rocketing pace, boffins across the globe are working hard to discover alternate sources of energy. Well, the most recent development in this terrain is a new virus-built battery that has the potential of powering cars and other electronic devices. The researchers used common bacteriophage viruses that usually infect bacteria but are harmless to humans to develop the battery.

The work of a group of MIT researchers, the innovative virus-produced batteries apparently comprise of nearly the same energy capacity as advanced rechargeable batteries. Boasting of great power performance, researchers associated with the study reveal that the batteries could find a place in hybrid cars as power plug-ins.

Lead researcher Angela Belcher, Germeshausen Professor of Materials Science and Engineering and Biological Engineering suggests that they could also be utilized to power a host of other personal electronic devices.

The new batteries, researchers’ further claim could be manufactured in a rather low-cost and environment-conscious way which is quite unlike traditional batteries that are made from graphite and cobalt oxide or lithium iron phosphate. To be made from materials that are non-toxic, the batteries will allow synthesis at and below room temperature. The batteries will also eliminate the need of harmful organic solvents.

The research in fact finds its roots in a study led by Belcher around three years ago. The team of researchers had then revealed to have engineered viruses that have the ability to construct an anode by using cobalt oxide as a coat. The viruses had also used gold as a coating, thus self-assembling themselves to build a nanowire.

“In lab tests, batteries with the new cathode material could be charged and discharged at least 100 times without losing any capacitance. That is fewer charge cycles than currently available lithium-ion batteries, but we expect them to be able to go much longer,” Belcher explained.

Belcher now reveals that as part of the new study, the team mainly emphasized on developing a very powerful cathode that could team up with an anode to generate power. The researcher further explained that it is far more difficult to build cathodes as compared to anodes mainly because a cathode needs to by high conducting so that it can function as a fast electrode.

Researchers thus genetically engineered viruses that could coat themselves with iron phosphate to later use carbon nanotubes. This resulted in a network of highly conducive material. Bundled as a typical coin cell battery, the prototype technology enables the battery to be assembled as a lightweight and flexible power solution. The conformable batteries also have the potential of taking the shape of a container.

The prototype battery was presented last week at a press briefing at the White House. MIT President Susan Hockfield spoke to U.S. President Barack Obama regarding the urgent need for federal funding to advance and implement new clean-energy technologies.

“Now that the researchers have demonstrated they can wire virus batteries at the nanoscale, they intend to pursue even better batteries using materials with higher voltage and capacitance, such as manganese phosphate and nickel phosphate,” remarked Belcher. “Once that next generation is ready, the technology could go into commercial production.”

While the research was funded by the Army Research Office Institute of the Institute of Collaborative Technologies, and the National Science Foundation through the Materials Research Science and Engineering Centers program, the new batteries, have also been described in the April 2 online edition of the journal, Science.