If word is to be believed, we might soon get to see a new standalone Twitter app dedicated only to the direct messaging feature of the micro-blogging site. Rumors are abound that the just-gone-public company is hard at work towards turning its private messaging attribute into a new product to rival instant messaging services like Whatsapp, KakaoTalk and more.

Multiple sources in the know of AllThingsD have brought to the fore interesting details which have given away the possibility everyone’s talking about at the moment. On Twitter, the direct message button on anyone’s profile allows a person to start a personal conversation with that person only, without it going into the public domain like usual Tweets do. 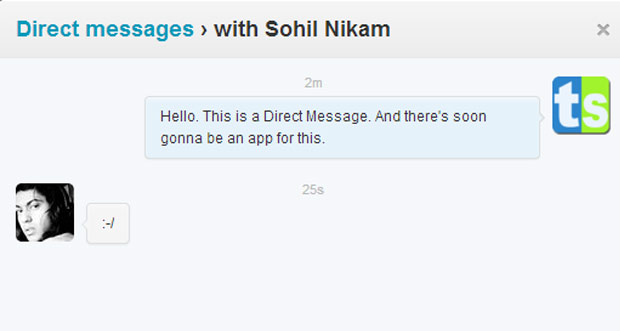 And while earlier, only folks who followed each other on Twitter were able to send such messages, a new update to the site earlier this week made it possible for anyone to use the feature regardless of following any accounts. Hints about the company slowly moving towards a separate direct messaging ecosystem can definitely be grabbed from this change.

Another tidbit which can be looked at is the fact that Twitter recently mentioned KakaoTalk as a threat in its S-1 IPO documentation. If the said instant messaging application is being viewed as competition, one can guess which direction the site is going to move in next. Additionally, Twitter execs had apparently sat down with employees from another popular instant messaging application MessageMe, perhaps trying to gain more knowledge of the territory they plan to explore next.

And it seems we won’t have to wait long for Twitter to unveil its new direct messaging idea. Sources say the new product could be showcased before the end of 2013.